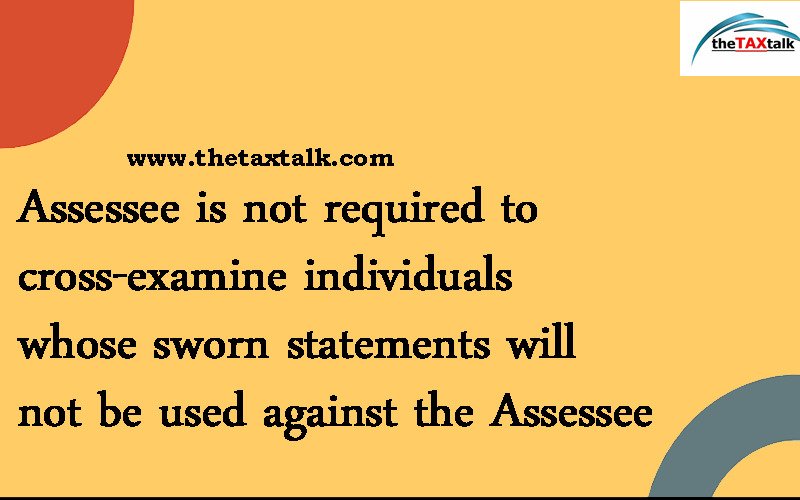 The issue before the Madras High Court in the writ filed by the assessee was whether assessee is not required to cross-examine individuals whose sworn statements will not be used against assessee? Madras HC opined it as “Yes”.

The citation of the case is as under:

1. Assessee had filed writ petition concerning assessment in case of search/requisition u/s 153A.

3. Assessee submitted that the typed set of papers clearly mentioned about two individuals, whose statements were per se adverse to assessee.

4. Thus, assessee should be permitted to cross-examine them.

5. Revenue submitted that notice u/s 142(1) was issued to which assessee had responded.

7. It contained a gist pertaining to the material.

8. Revenue reiterated that this did not mean that sworn statements of individuals were going to be used against assessee.

On Writ, HC while deciding the issue as to whether assessee is not required to cross-examine individuals whose sworn statements will not be used against assessee as Yes, made the following observation:

1. HC found that the stated position of Revenue that sworn statements were not going to be used against assessee had itself put an end to controversy in captioned matter.

2. Besides, in the instant case, statements made by the individuals were not the basis of the impugned order.

3. There were two aspects regarding pleadings. One was that no new facts had emerged and hence, a rejoinder was for all practical purposes, not necessary in an instant case. Second, in the counter affidavit, there was a reference to ‘Comments’. This should be avoided. It was for parties to mention their respective stated positions before Court so that Court was able to embark upon an adjudication, set out its discussion and give its dispositive reasoning for arriving at a conclusion.

4. The stated position that sworn statements were not going to be used against assessee as set out in counter affidavit and as captured in this order by itself doused request for cross-examination.

5. It drew curtains on request for cross examination.

6. If statements were not going to be used against the assessee, it could not be again said that persons, who made sworn statements must be cross-examined.

7. Thus, it was not necessary to further dilate into the Natural Justice Principle.