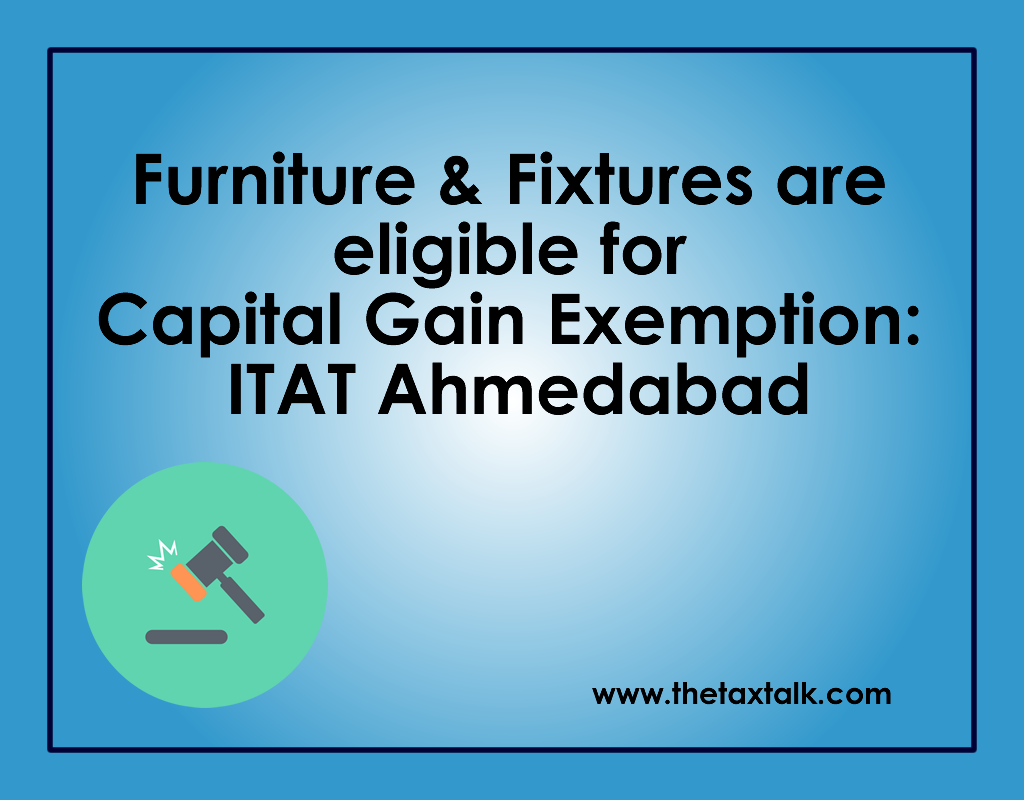 S. 54: The expression “cost of the residential house so purchased” in s. 54 is not confined to the cost of civil construction but includes furniture and fixtures if they are an integral part of the purchase. The fact that the assessee did not make the claim is no reason to deny the claim if he is otherwise entitled to it (Scope of Srinivas R Desai 155 TTJ 743 (Ahd) expanded)

There are, for example, situations in which the residential units for sale come, as a package deal, with things like air-conditioners, geysers, fans, electric fittings, furniture, modular kitchens and dishwashers. If these things are integral part of the house being purchased, the cost of house has to essentially include the cost of these things as well. In such circumstances, what is to be treated as cost of the residential house is the entire cost of house, and it cannot be open to the Assessing Officer to treat only the cost of only civil construction as cost of house and segregate the cost of other things as not eligible for deduction under section 54.

(ii) Let us, in this light, address ourselves to the facts of this case. Quite clearly, for the detailed reasons set out earlier in this order, the two separate agreements for sale of house property and the furniture and fixtures cannot be considered in isolation of each other on standalone basis, and have to considered essentially as a composite contract- particularly in the light of the undisputed contents of the agreement to sell dated 19th January 2011. Given these facts, the cost of the new asset has to be treated as Rs 78,00,000. The cost of the residential house is Rs 78,00,000 as the assessee did not have any choice about buying or not buying the furniture at the assigned values, as irrespective of the purchases of the furniture also, the assessee was under an obligation to pay the same amount of Rs 78,00,000.

(iii) If at all there was any beneficiary of this splitting up arrangements, the beneficiary was the seller of this property inasmuch as the personal effects in question, which were assigned the value of Rs 18,00,000, were not covered by the definition of capital asset under section 2(14), and, accordingly, gains on sale of these personal effects were outside the ambit of taxable capital gains. Only if the Assessing Officer had read the agreement to sell carefully and considered the same in the light of actual sale deeds, he could have easily identified the manner in which the revenue authorities were possibly taken for a ride, and he could have initiated suitable remedial action.

That, however, was not done. Instead, the Assessing Officer proceeded to decline benefit of Section 54 to the assessee to the extent of consideration assigned to these personal effects. Even if Rs 18,00,000 was indeed to be assigned to the personal effects that the assessee had to, per force, buy at the time of buying the residential house- as apparently was the case, the cost of the new asset in house was to be taken as the composite cost i.e. Rs 78,00,000.

The remedy was in bringing the right amount of capital gains to tax by ignoring the nomenclature of sale of personal effects, specifically excluded under section 2(14)(ii) from the definition of capital assets, as sale of residential property. That, however, was not done. It could not have been open to the authorities below to treat the payment of Rs 18,00,000 on account of furniture and fixtures on standalone basis, and thus exclude it as a separate item rather than as a “cost of the residential house so purchased”. In our considered view, therefore, the assessee is entitled to deduction under section 54F by treating entire amount of Rs 78,00,000 as the “cost of the residential house” purchased within specified time limit under section 54.

(v) When the above position was put to the learned Departmental Representative, he was fair enough in not really being very aggressive in disputing our perspectives on the artificial splitting of contracts. He, however, pointed out that it was never the case of the assessee that these two agreements were required to be viewed together- particularly in the light of the agreement to sell.

The case of the assessee, according to learned Departmental Representative, was that the assessee incurred the expenses on furniture and fixtures to make the residential property habitable, and it was in this context that the reliance was placed on this Tribunal’s decision in the case of Srinivas R Desai Vs ACIT [(2013) 155 TTJ 743 (Ahd)]). It was thus contended that an altogether different case cannot be made out at this stage and we must confine ourselves to adjudicating upon assessee’s stand that the expenditure incurred on additional furniture and fixtures would constitute permissible costs of making the residential unit habitable or not.

(vi) We are not inclined to approve the objection so taken by the learned Departmental Representative. It is only elementary that under rule 11 of the Income Tax Appellate Tribunal Rules 1963, this Tribunal, in deciding the appeal, is not bound to remain confined to the original or additional grounds of the appellant, as long as the party affected by the ground, on which the decision of the Tribunal rests, has had a sufficient opportunity of being heard on that ground. There is no dispute that the learned Departmental Representative has been heard on the ground on which we are deciding this appeal, and it is not even his case that he was not given adequate opportunity to address us on this ground. As a matter of fact, the hearing in this case was fixed again on 7th February 2018 only to hear the parties on the aspect of the matter on which the appeal is eventually decided.

(vii) Coming to the correctness of the plea taken by the assessee, that aspect of the matter is no longer really relevant at this stage. Be that as it may, it is difficult to miss the fact that rather than going by the first principles and examining the claim of the taxpayer on that basis, more often than not, most of the us are tempted to identify the highest common factors of an available judicial precedent vis-à-vis the case in our hands, and treat it as a covered matter.

(vii) Whatever be the merits of this approach, and there are certainly many merits in this approach, even when it results in a lapse, such a lapse cannot be allowed to prejudice the legitimate interests of the assessee. Here is an NRI who decided to sell a fairly spacious house in his hometown, and yet, to keep his India connection alive, invested a part of these sale proceeds in a smaller residential unit, but he has been declined the legitimate deduction under section 54 in respect of the same, only for the reason, as the circumstances suggest, that he is made an unwilling party to artificially splitting of sale consideration to minimise the capital gains burden of the seller.

(viii) Leaving even this aspect of the matter aside. Quite clearly the sale of furniture and fixtures was an integral part of the deal of buying the house property.

(ix) Whichever we way look at it thus, the assessee was wronged in partial denial of deduction. Now that the facts on record demonstrate that the actual consideration for the new house property was Rs 78,00,000, he is being sought to be declined resultant relief on the ground that this particular plea was not taken earlier. That is certainly not a fair treatment to an assessee. What matters really is that whether the assessee deserves the relief on merits or not, and when the assessee deserves the relief on merits, such technicalities should not be allowed to come in the way of justice to the assessees. We are, therefore, not inclined to uphold the technical objection raised by the learned Departmental Representative.