Once books of account are rejected for want of supporting vouchers and details, then income of taxpayer is required to be estimated 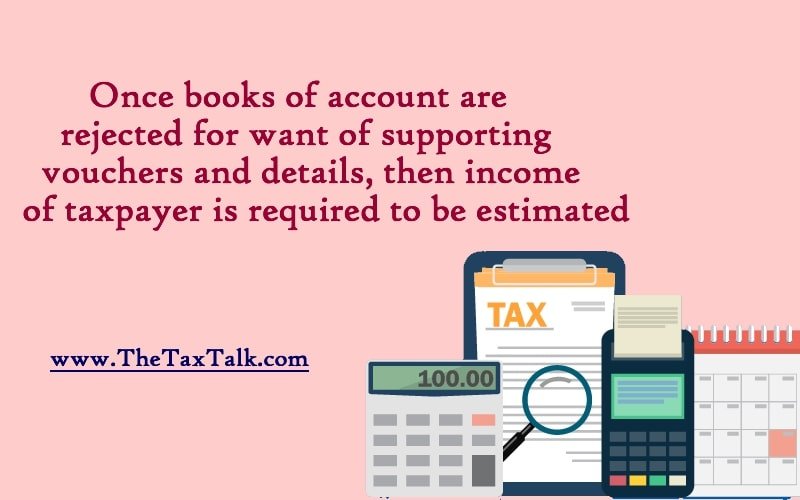 Once books of account are rejected for want of supporting vouchers and details, then income of taxpayer is required to be estimated

The Assessee firm was allotted retail outlet dealership for sale of petrol and high speed diesel by Indian Oil Corporation Ltd. vide LOI.
There were two partners namely Gulab Chand son of Babu Lal and Suresh Kumar Rakesh son of Shyam Lal at the time of LOI and commencement of business of the assessee firm.
Thereafter these two partners decided to handover the operation of the pump to Ajay Kumar and Vijay Kumar vide general power of attorney and they started the operation/business activities of the petrol pump.
The original partners also authorized new partners to operate bank accounts of the firm for smooth conducting of the business.
They continue to do the business activities up to Dec 07, 2007 when the control and administration of the business was again taken back by the original allottees.
Thereafter a search and seizure action was carried out at the residential and business premises belonging to Vaishwya Group of cases, wherein, certain papers and documents belonging to the assessee M/s Meja Filing Station were found and seized from hotel Ajay International, Allahabad. Pursuant to the search and seizure action, notice u/s. 153C was issued and the AO framed the assessment u/s 153C r.w.s. 153A & 143(3) as well as u/s. 153B(1)(b).
The AO also rejected the books of account and estimated the income by applying 2% N.P. He also made substantive assessment for the AY 2005-06 to part period of 2008-09 in the hands of Vijay Kumar and Ajay Kumar and protective assessment in the hand of assessee firm. For the remaining AYs i.e., 2009-10 to 2011-12, the AO made substantive assessment in the hands of assessee firm.
On appeal, the CIT(A) held that in view of its finding in the case of Ajay Kumar and Vijay Kumar, the income had to be assessed on substantive basis in the hands of assessee and accordingly the protective assessment was converted to the substantive assessment. However, the CIT(A) restricted the addition by applying NP @ 1%.
On appeal, the issue before Tribunal and it’s observations were as under:
1. Whether execution of partnership deed by introducing new partners through PoA, amounts to mere reconstitution of partnership firm
YES: ITAT
2. Whether when no return is filed by taxpayer, then evidences procured through search & seizure will constitute incriminating material which may result in undisclosed income –
YES: ITAT
3. Whether material found and seized during search operation shall have no bearing on determination of total income of taxpayer, if he has already declared such income u/s 139(1)
YES: ITAT
4. Whether once books of account are rejected for want of supporting vouchers and details, then income of taxpayer is required to be estimated
YES: ITAT
Assessee’s appeal partly allowed: ALLAHABAD ITAT

Tribunal observed as under:

++ the assessee firm was very much in existence right from the beginning as it is evident from the LOI, the power of attorney given by two partners namely Gulab Chand and Suresh Kumar Rakesh in favour of the Ajay Kumar and Vijay Kumar and also deed of mandate for operating the bank account by Ajay and Vijay Kumar. The authorization for operating the bank account is signed by the partners of partnership firm namely Meja Filing Station as it is clear from the copy of the letter of mandate executed by the assessee firm through its partners.
Thus, M/s. Meja Filing Station was a partnership firm as on the date when the letter of mandate was signed and executed by the assessee firm through original partners in favour of Ajay and Vijay Kumar. These documents have been reproduced by the AO and are undisputed documents obtained from the Bank of Baroda, Meja Road, Allahabad.
Therefore, the execution of partnership deed is nothing but reconstitution of the partnership firm, which was already in existence having the same partners.
Thus, there was no change either in the constitution or the partners of the partnership firm and therefore, the new partnership deed would not have any effect on the existence of the assessee partnership firm at least from the year 1999 when the assessee has authorized Ajay and Vijay Kumar as well as execution the letter of mandate to operate the bank account. Therefore, the contention of AR that assessee firm was not in existence is contrary to the documentary evidence;
as far as the satisfaction of AO for initiating the proceedings u/s 153C is concerned, the assessee has not disputed the material found and seized during the course of search and seizure proceedings and belonging to Meja Filing Station. Therefore, the documents found and seized during the search and seizure action belongs to Meja Filing Station including ledger accounts of assessee in the books of Hotel Ajay International as well as certain vouchers in the name of Ajay and Vijay Kumar, who were running the filing station as per the authorization at the relevant point of time. The documents found and seized pertains to the Financial Year 2007 and there is no ambiguity in the details as found recorded in the seized material that the assessee was doing the business of running filing station being retail dealership of sale of petrol and high speed diesel. Since there was no return filed by the assessee up to the AY 2008-09 till Dec 07, 2007 therefore, the seized material constitute incriminating material disclosing undisclosed income of assessee;
as far as estimation of income is concerned, it is noted that the AO has framed the assessment on substantive basis by applying N.P. at 2% which was restricted by the CIT(A) to 1%. The AO rejected the books of account of the assessee due to non production of the relevant details and even the books of account, therefore, to the extent of rejecting the books of account the AO was justified however it is pertinent to note that for the AY 2008-09 to AY 2010-11 the assessee firm filed return u/s 139(1) disclosing the income from the business of retails outlet of selling petrol and high speed diesel and therefore, the material found and seized during the search and seizure action pertaining to the F.Y. 2007 shall have no bearing on determination of the total income of the assessee when the assessee has already declared the income from such business. The AO has passed an identical order by applying the N.P. @ 2% after rejecting the books of account but the seized material which was found during search and seizure action reveals that the assessee is engaged in the business and once the assessee has already declared the income from said business in the return, then the said seized material which reveals the details of the transaction would not be considered as incriminating material to have any effect on determination of the total income of the assessee for these years. Therefore, the addition made by AO in the proceeding u/s. 153C for the A.Y 2008-09 to AY 2010-11 are not based on any material revealing undisclosed income, and hence, liable to be deleted.

Tags: Once books of account are rejected for want of supporting vouchers and detailsthen income of taxpayer is required to be estimated