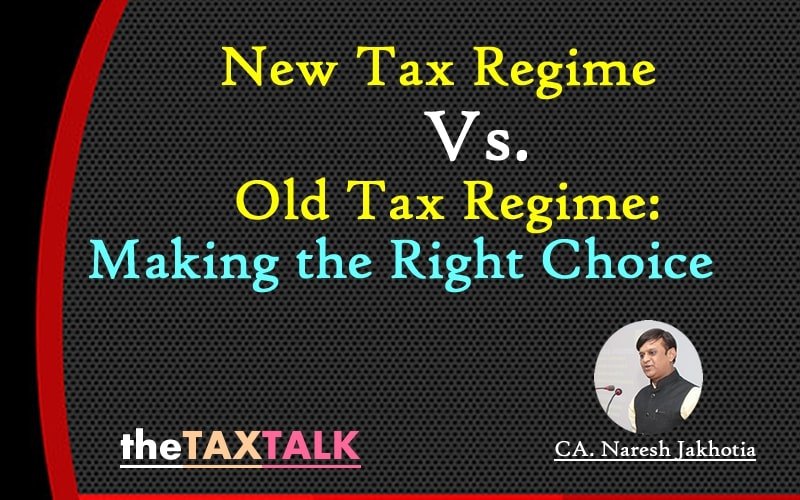 Income Tax Return for the FY 2020-21 (AY 2021-22) has to be filed by the individual taxpayers by choosing the optional tax regime. Finance Act-2020 has introduced a dual tax regime whereby taxpayers are given a choice to opt for new regime of concessional tax rate without any deduction & exemptions or old tax regime of higher tax rate albeit with deductions & exemptions. Taxpayers are given freedom & flexibility to make the choice for better tax optimization.

Taxpayers without any business income will have a free entry & exit option in the new regime. However, it is not so for a person having business income wherein option once exercised cannot be withdrawn except on one subsequent occasion. In such cases, the option has to be exercised not only considering the income of the FY 2020-21 but also considering the planning & impact for succeeding years.

Let us know about the difference between the old tax regime & new tax regime along with the way of making the right choice.

The difference of tax rate in the Old Regime vs New Regime is as under:

The old regime has just 3 applicable tax rates of 5%, 20% & 30%, as against 6 slab rates of tax under the new tax regime. Income above Rs. 15 Lakh is unaffected whether it’s a new tax regime or an old tax regime.

Let us first compare the tax liability without any deductions & exemptions on income at every peak point of income slab in case of individual & HUF taxpayer (who is not a senior citizen & not salaried taxpayers):

(In New Income Tax regime, Tax slab rates are the same for all individuals   including senior citizens and Very Senior citizens).

Tax calculated above is inclusive of 4% cess.

Apparently, though the new regime displays net savings in tax but it may not be positive for all taxpayers after considering exemptions and deductions. To arrive at the correct conclusions, taxpayers need to work out the break-even point of deductions and exemptions where the tax liability under the old regime and the new regime will be the same. It can be arrived at by summing up all deductions and exemptions which the taxpayer intends to use. So long as the amount of deduction & exemption exceeds the break-even point, staying in the old regime would be advisable. Few of the common deduction which majority of the taxpayers avails are

It may be noted that all above deduction will not be available if the taxpayers opts for new tax regime.

Though the new tax regime is simple to follow, yet it will be worthwhile to do the mathematics before opting for it. The million dollar question is, how should taxpayers make this choice? Both regimes have their own sets of pros and cons. The choice would necessarily dependant on:

With above background, following observation can further help taxpayer in arriving at a better conclusion:

Section 115BAC which provides for the new tax regime options reads as under:

Tax on income of individuals and Hindu undivided family.

115BAC. (1) Notwithstanding anything contained in this Act but subject to the provisions of this Chapter, the income-tax payable in respect of the total income of a person, being an individual or a Hindu undivided family, for any previous year relevant to the assessment year beginning on or after the 1st day of April, 2021, shall, at the option of such person, be computed at the rate of tax given in the following Table, if the conditions contained in sub-section (2) are satisfied, namely:—

Provided further that where the option is exercised under clause (i) of sub-section (5), in the event of failure to satisfy the conditions contained in sub-section (2), it shall become invalid for subsequent assessment years also and other provisions of this Act shall apply for those years accordingly.

(2) For the purposes of sub-section (1), the total income of the individual or Hindu undivided family shall be computed,—

(b)  under the head “Income from house property” with any other head of income;

(iii)  by claiming the depreciation, if any, under any provision of section 32, except clause (iia) of sub-section (1) of the said section, determined in such manner as may be prescribed; and

(iv)  without any exemption or deduction for allowances or perquisite, by whatever name called, provided under any other law for the time being in force.

(3) The loss and depreciation referred to in clause (ii) of sub-section (2) shall be deemed to have been given full effect to and no further deduction for such loss or depreciation shall be allowed for any subsequent year:

Explanation.—For the purposes of this sub-section, the term “Unit” shall have the meaning assigned to it in clause (zc) of section 2 of the Special Economic Zones Act, 2005 (28 of 2005).

(5) Nothing contained in this section shall apply unless option is exercised in the prescribed manner by the person,—

(i)  having income from business or profession, on or before the due date specified under sub-section (1) of section 139 for furnishing the returns of income for any previous year relevant to the assessment year commencing on or after the 1st day of April, 2021, and such option once exercised shall apply to subsequent assessment years;

(ii)  having income other than the income referred to in clause (i), alongwith the return of income to be furnished under sub-section (1) of section 139 for a previous year relevant to the assessment year: