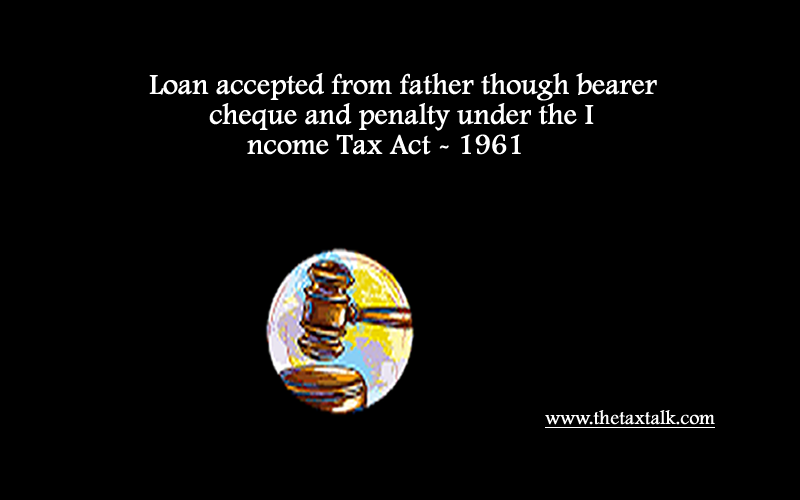 Short Overview : Where loan accepted by assessee through bearer cheque, was taken from his father for meeting his urgent business needs, the said transaction between father and son would not attract imposition of penalty under section 271D and hence, the penalty levied under section 271D would not be sustainable.

AO noticed that assessee accepted loan through bearer cheque. Accordingly, he levied penalty under section 271D for violating provisions of section 269SS. Assessee submitted that the said loan was taken from his father, which was required for his urgent business needs i.e. for purchase of petroleum products. Accordingly, he submitted that as the transaction was between the father and the son and as the amount was received through bearer cheque to meet the urgent needs, therefore, the penalty would not be leviable.

It is held : Assessee demonstrated that he took impugned loan from his father due to urgent business needs, which was not considered by Revenue. Further, both the father and the son were assessed to tax and were maintaining regular books of account and except technical violation there was no escapement of income or suppression of income in the instant case. Further, though the transaction was between two independent business organizations but the same remained between father and son, which would not attract imposition of penalty under section 271D. Hence, the penalty levied under section 271D would not be sustainable.

IN THE ITAT, BANGALORE BENCH

These two appeals filed by the assessee are directed against the common order of the Commissioner (Appeals), Hubballi (hereafter referred as “CIT(A)”) in ITA Nos.CIT(A), Hubli/10065 & 10064/2018-19, dt. 7-12-2018 for the assessment year (AY) 2014-15. since, the issues involved in both the appeals are identical, these appeals are clubbed, heard together and disposed off by a common order as under:

The Addl. Commissioner not being impressed with the explanation levied the penalty of Rs. 4,00,000 under section 271E of the Act.

“7. We have considered the rival submissions. The facts as decided by ITAT Kolkata in the case of Dr.B.G.Panda were that loan transactions were carried out in cash in violation of the provisions of section 269SS of the Act between husband and wife. On the question of levy of penalty under section 271D of the Act, the Tribunal held as follows :–

“Section 269SS is applicable to the deposits or loan. It is true that both in the case of a loan and in the case of a deposit, there is a relationship of debtor or creditor between the party giving money and the party receiving money. In the case of deposit. the delivery of money is usually at the instance of the giver and it is for the benefit of the person who deposits the money and the benefit normally being the earning of interest from the party who customarily accepts deposit. In the case of loan it is the borrower at whose instance and for whose needs the money is advanced. The borrowing is primarily for the benefit of a borrower although the person who lends the money may also stand to gain thereby earning interest on the money lent. In the instant case, this condition was not applicable because there was no relationship of the depositor or a creditor as no interest was involved.

This was neither a loan nor a deposit. At the same time. the words ‘any other person’ are obviously a reference to the depositor as per the intention of the Legislature. The communication/transaction between the husband and wife are protected from the legislation as long as they are not for commercial use. Otherwise, there would be a powerful tendency to disturb the peace of families. to promote domestic broils, and to weaken or to destroy the feeling of mutual confidence which is the most enduring solace of married life. In the instant case, the wife gave money to husband for construction of a house which was naturally a joint venture for the property of the family only. This transaction was not for commercial use. The amount directly received by the husband. i.e. the assessee. was to the extent of Rs. 17.000 only and the balance amount of Rs. 26.000 was given by payment directly to the supplier of the material required for the construction of the house. Though the expenditure was apparently incurred by the husband being the karta/head of the family, it could not be said that the wife could not have any interest of her own in this house being constructed. The transaction was neither loan nor any gift as no ‘interest’ element was involved and there was no promise to return the amount with or without interest. It was clear that the money given by the wife was a joint venture of the family. Taking into consideration overall facts and circumstances of the case, it could be said that the aforesaid piece of legislation was not applicable in the instant case. By taking the liberal view and applying the golden rule of interpretation, the assessee had a reasonable cause within the meaning of section 27 3B. Therefore. the penalty should be deleted.

On the question whether acceptance of cash by husband from his wife would amount to taking of loan or advance in strict sense of section 269SS , the tribunal held that it cannot be construed as loan attracting provisions of section 269SS of the Act and therefore no penalty under section 271D could be levied.

The assessing officer had levied the penalty under section 271D which was cancelled by the Income-tax Appellate Tribunal holding as under :

“Even keeping in view the contents of the Departmental Circular No. 387 (1985) 152 ITR (St.) 1), it was never the intention of the Legislature to punish a party involved in a genuine transaction.

The same is directed to be deleted. The appeal of the assessee is allowed.”