Interest Income can’t be included in Total Income of Assessee as Mercantile System of Accounting in juxtaposition to ‘Real Income Theory’: ITAT 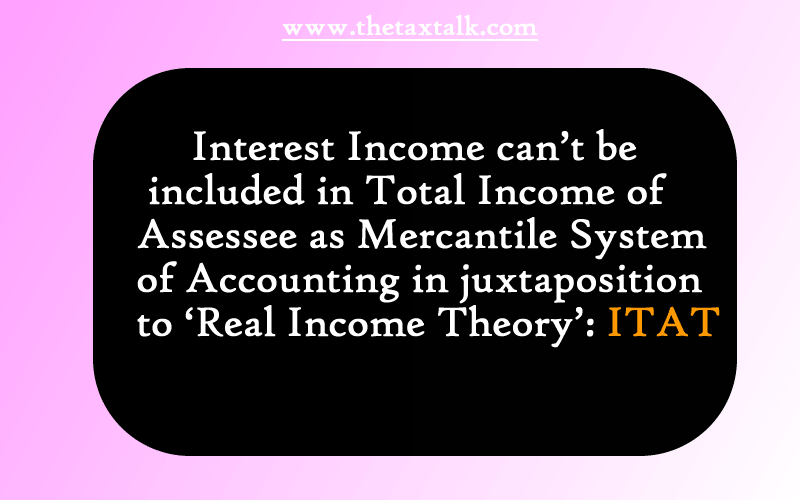 Interest Income can’t be included in Total Income of Assessee as Mercantile System of Accounting in juxtaposition to ‘Real Income Theory’: ITAT

The Income Tax Appellate Tribunal (ITAT), Pune bench ruled that Interest Income cannot be included in the total income of the assessee as a mercantile system of accounting in juxtaposition to ‘real income theory’.

The assessee, M/s. Nutan Warehousing Co. Pvt. Ltd. is a company engaged in the business of warehouse renting.

During the course of assessment proceedings, the Assessing Officer (AO) observed from 26AS data that the assessee had not shown interest from bank amounting to Rs.26,125/-.

An addition was made on this account, which came to be sustained in the first appeal.

The 26AS data revealed the assessee earning interest income of Rs.26,125/- from Rupee Co-op Bank Ltd., that was not disclosed.

The bank had become defunct and no financial transactions were allowed.

The RBI, vide its direction dated 21-02-2013, referred to on page 16 of the impugned order, banned the transactions of the bank.

Due to such a ban, even the principal amount deposited by the assessee became doubtful of recovery, much less the interest in question that was not received.

The CIT(A) has gone with the accrual concept of income under the mercantile system of accounting and held that the interest once accrued became chargeable to tax notwithstanding its non- receipt.

The coram headed by the Vice President, R.S.Sayal noted that even the principal amount of deposit made by the assessee became irrecoverable.

These facts indicate that the assessee did not receive any such interest income from Rupee Co-op Bank Ltd. whose functions were banned by the RBI.

The ITAT ruled that the mercantile system of accounting in juxtaposition to ‘real income theory’ in the facts and the circumstances of the instant case, the inescapable conclusion which follows is that the interest income of Rs.26,125/- cannot be included in the total income of the assessee for the year under consideration.

Such an income may be appropriately charged to tax on the regularisation of the operations of the bank coupled with the possibility of receipt of income in foreseeable future.

Insofar as the instant year is concerned, the ITAT holds that the interest cannot be charged to tax.