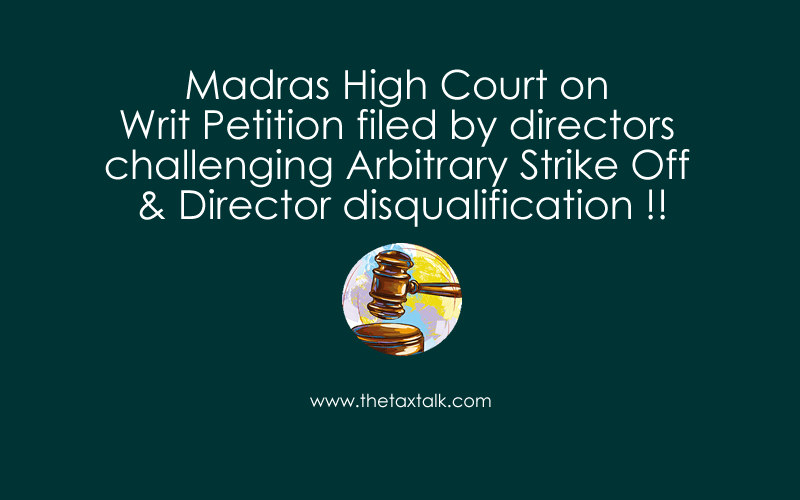 Madras High Court delivered a judgement on Writ Petition filed by directors challenging Arbitrary Strike Off & Director disqualification.
The order of the copy is attached herewith.
Relevant part of the order starts from Page No. 28 of the attachment.
Some important observations as follows:
Companies Act, 2013 came into effect from 1.4.2014 and the Registrar of Companies has wrongly given retrospective effect and erroneously disqualified the petitioner-directors from 1.11.2016 itself before the deadline commenced wrongly fixing the first financial year from 1.4.2013 to 31.3.2014,
By virtue of the new Section 164(2)(a) of the 2013 Act using the expression “for any continuous period of three financial years” and in the light of Section 2(41) defining “financial year” as well as their own General CircularNo. 08/14 dated 4.4.2014, the first FY would be from 1.4.2014 to 31.3.2015, the second FY would be from 1.4.2015 to 31.3.2016 and the third FY would be from 1.4.2016 to 31.3.2017, whereas the ROC clearly admitted that the default of filing statutory returns for the FYs commenced from FY 2013-14, 2014-15 and 2015-16 i.e., one year before Cos. Act 2013 came into force. This is the basic incurable legal infirmity that vitiates the entire impugned proceedings;
Disqualification could get triggered off only on or after 30.10.2017 only, if any company fails to file annual forms for three financial years. Importantly, it is to be borne in mind that even beyond that time limit, additional time limit of 270 days was available by virtue of the then first proviso to Section 403;
Although there is no statute or provision expressly spelling out the observance of the principles of natural justice against disqualification of directors, as the legal right of the petitioners to continue as director in other company or reappointed in any other company, which are scrupulously following the provisions of the Companies Act, have been deprived of, the principles of natural justice should have been adhered to by issuing proper notice to all the directors;
When the disqualification clause was not attracted to the directors of private companies under the old Act of 1956, the same cannot be allowed to take a retrospective effect under the new Act, when the provision of Section 164(2)(a) came into force only from 1.4.2014. This is also for one more reason that the failure to file the annual returns has been adequately taken care of by the penal provision under Section 92, making it clear that every officer of the company who is in default shall be punishable with imprisonment for a term which may extend to 6 months or with fine which shall not be less than Rs. 50,000/- but which may extend to Rs. 5,00,000/-, or with both. Again u/s 137, the failure to file the financial statement visits punishment with imprisonment for a term which may extend to 6 months or with fine which shall not be less than Rs. 1 lakh but which may extend to Rs. 5 lacs, or with both. Further, u/s 441(4), the default in filing returns or accounts compoundable by Tribunal or Regional Director or by any officer authorized by the Central Government;
When the default in filing the accounts or returns are made as compoundable offence, Section 164(2)(a) providing the disqualification of director of private company not only in the defaulting company, but also from other company in which the petitioner is a director, diligently and meticulously following every provision of law, is certainly disproportionate to the lapse, as it is only regulatory in nature, because, notice to be sent under Section 248(1) of the Companies Act, 2013 by the Registrar ofCompanies (for striking off the name of the company from the Registrar of Companies) on the premise that the company has not been carrying on any business for a period of 2 FYs, is different from the disqualification u/s 164(2)(a), inasmuch as a company can be struck off, if the company has not been carrying on any business for a period of 2 FYs, whereas for disqualification, the criteria is 3 FYs. Therefore, in my considered opinion, although the petitioners have not challenged the provision of Section 164(2)(a), as ROC have not followed the principles of natural justice, extinguishing the corporate life of the directors to  the extent of disqualifying them to hold the directorship in the other companies, the said provision is liable to be read down, hence, Section 164(2)(a) is read down to the extent it disqualifies the directors in other companies which are scrupulously following the requirements of law, making it clear that no directors in other companies can be disqualified without prior notice.
It is made clear beyond any pale of doubt that the mischief of removal of the names of the companies by the Registrar of Companies and the disqualification of the directors in the defaulting company will go together, as it is inseparable, and the Registrar of Companies need not give fresh notice to the directors for their disqualification from the dormant company, if there is a failure to file the financial statement or annual return for any continuous period of 3 FYs as per Section 164(2)(a).