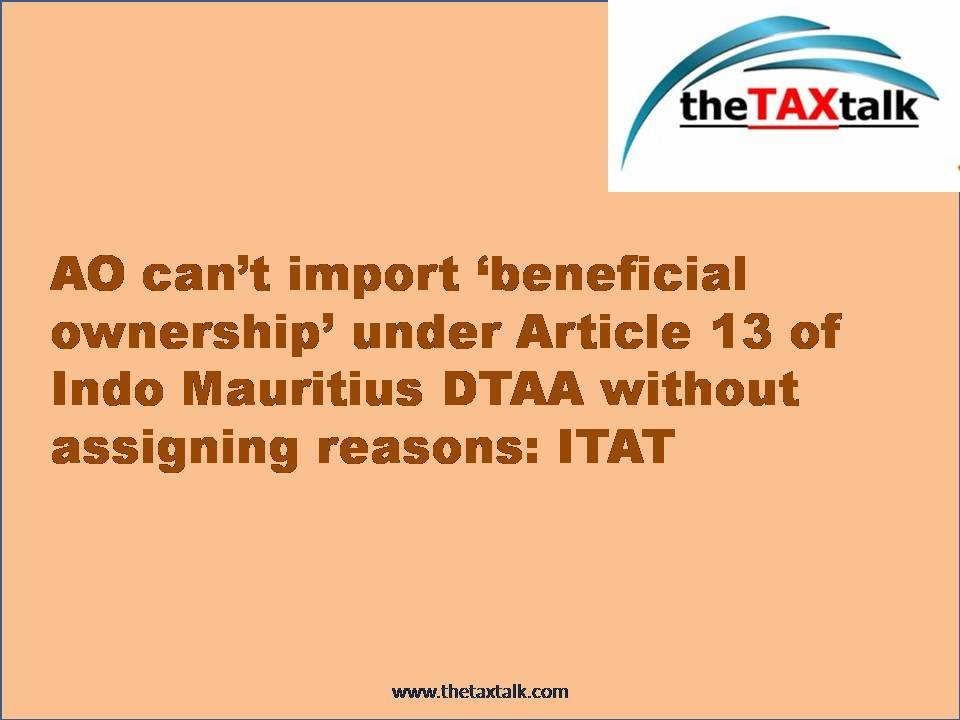 Blackstone FP Capital Partners Mauritius V Ltd v. DCIT – [2022] 138 taxmann.com 328 (Mumbai – Trib.)
Short Overview of  the case:
The issue before the Mumbai Tribunal was:
“Whether the concept of beneficial ownership can be read into the scheme of Article 13 of the Indo Mauritius tax treaty when such Article doesn’t specifically provide so?
The Mumbai Tribunal held that the concept of beneficial ownership being a sine qua non to entitlement to treaty benefits cannot be inferred or assumed in the absence of the specific provision.
Unlike Article 10 or Article 11, which specifically provides for beneficial ownership of interest or dividend to be entitled to treaty protection, there is no such provision in Article 13 of the Indo Mauritius tax treaty.
Unless a condition is specifically set out in the treaty provision itself, it cannot possibly be inferred.
A beneficial ownership test, when such a test is not embedded in the treaty provision itself, is rather than a permissible interpretation of the treaty provisions, a rewriting of the treaty provision itself.
In the context of international tax treaties, respect for negotiated bargains between contracting states is fundamental to ensure tax certainty & predictability and to uphold the principle of pacta sunt servanda.
Article 26 of the Vienna Convention on the Law of Treaties also provides that “Every treaty in force is binding upon the parties to it and must be performed by them in good faith”.
Any violation of this approach, no matter how well-intended, can only be at a huge cost of tax unpredictability- something tax administrations can ill afford.
One must also remember that the tax treaties are replete with choices but once these choices are consciously made by two willing partners these choices cannot be unilaterally nullified based on perceptions about some underlying notions of what would constitute good public policy.
Thus, the Assessing Officer (AO) had fallen in error in proceeding on the basis that the concept of beneficial ownership is relevant in the context of Article 13, without assigning any specific and cogent reasons in support of this inference.
Accordingly, the matter was to be remanded back for deciding the fundamental issue as to whether the requirement of beneficial ownership can be read into the scheme of Article 13 of the Indo Mauritius tax treaty.
Tags: Article 13Assessing Officerbeneficial ownership
Share Link: