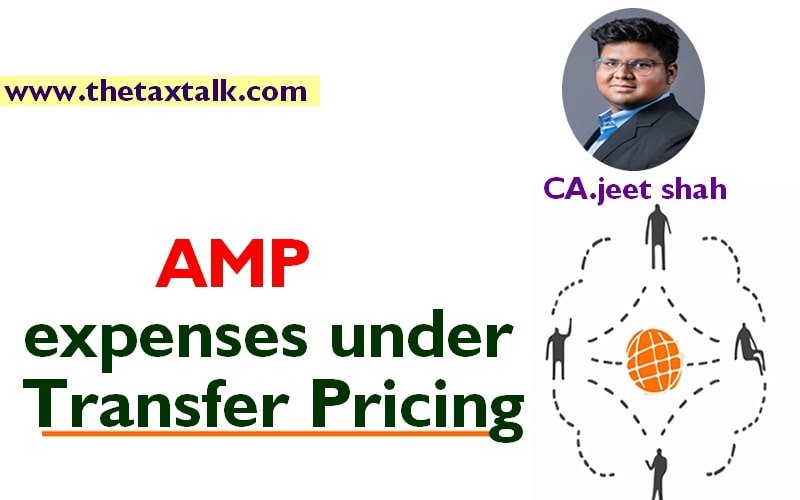 The most important and unsolved puzzle of transfer pricing litigation is Advertisement, Marketing & Promotion Expenses (AMP), which has no statutory law or legislation, thus its complete analogy and understanding is getting developed purely through judicial precedents and the same is still at a very nascent stage. In a typical MNC business model, the Indian subsidiary acts as a distributor/provider of goods/services and incurs AMP expenses for the promotion of its products or services. The Assessees have regularly contended before various judicial forums that the AMP expense is incurred necessarily for the purpose of selling its products/services in the Indian market. The purpose of this Article is to acquaint the reader with the basic concepts, the issues involved and broad thrust of judicial pronouncements and to gain an in-depth understanding of the concepts, issues involved, rival contentions and judicial thought process

One of the first cases to have dealt with this issue wasMaruti Suzuki India Ltd. v Additional Commissioner of Income Tax[(2010) 328 ITR 210] in which the Delhi High Court held that AMP expenses incurred would qualify as an international transaction if it exceeded the expenses incurred by similarly situated and comparable independent domestic entities. The matter was then remanded, however, this judgment was challenged before the Hon’ble Supreme Court and was overruled inMaruti Suzuki India Ltd. v. Addl. CIT[2011] 335 ITR 121 (SC).

The Maruti Suzuki India Ltd case again travelled to the Delhi Bench of ITAT in case of LG Electronics India Pvt. Ltd. v Assistant Commissioner of Income Tax[(2013) 140 ITD 41 (Delhi) (SB)],wherein it was held that the Assessing Officer (‘AO’) was entitled to make a transfer pricing adjustment under Chapter X of the Act on the basis of BLT in respect of the AMP expenditure incurred by Indian Entity as the same is an international transaction.

The Chennai ITAT, in the case of Ford India Private Limited Ltd (2013-TII-118-ITAT-MAD-TP), followed the Special Bench ruling in the case of LG Electronics India Pvt. Ltd (supra) in applying Bright-Line Test (BLT) to arrive at the adjustment towards excess AMP expenditure where tribunal had arrived on altogether different way of determining AMP expenses wherein tribunal held that expenditure directly in connection with sales had to be excluded in computing the AMP adjustment and deleted the hypothetical brand development fee adjustment computed at 1 % of sales made by the TPO, and provided relief upto 50 % with respect to adjustment made by the TPO for Product Development (PD) expenditure held as recoverable from the parent company.

The rationale of LG Electronics India Pvt. Ltd(Supra) was discarded and departed by Delhi High Court in case of Sony Ericsson Mobile Communications India Pvt. Ltd. v Commissioner of Income Tax[(2015) 374 ITR 118], wherein it overruled the aforementioned judgments to the extent that they dealt with the question of when AMP expenses would constitute an international transaction.

The theory of Bright Line Test (BLT) as inferred from DHL before the US Tax Court is a thin line distinguishing between the routine and non-routine expenditure incurred on advertisement and brand promotion. AMP expenses incurred by the distributors beyond such ‘Bright Line limit’ constituted non routine expenditure, resulting in creation of economic ownership in the form of market intangibles which belong to the owner of the brand. However many judicial precedents in India has discarded the concept of BLT by stating that Arm Length Price (ALP) adjustment on BLT to determine international transactions is not permissible. The Delhi High Court in case of Sony Ericsson Mobile Communications IndiaPvt.Ltd.v.CIT,2015SCC Del 8083: (2015) 374 ITR 118 (Del) held that the ‘Bright Line Test’ is not an appropriate yardstick for determining the existence of an international transaction much less for calculating the ALP.

Why was Intensity Adjustment used instead of BLT?

How is Intensity Adjustment used?

Due to the lack of statutory law and legislative framework governing transfer pricing, the taxability of AMP expenses has become a biggest controversy and dilemma, and it also offers no guidance in situations where an express agreement does not exist. Sony Ericsson (Supra)is definitely a silver lining in the right direction, so far as it overruled the BLT. The BLT is fraught with difficulties and arbitrariness, both in terms of compatibility with the statute and commercial considerations.

Now that the issue of AMP expenses has reached the Supreme Court, a final word on the same is awaited, which might solve the most controversial area of transfer pricing litigations and may give a clear view on AMP in the clouds of confusion.