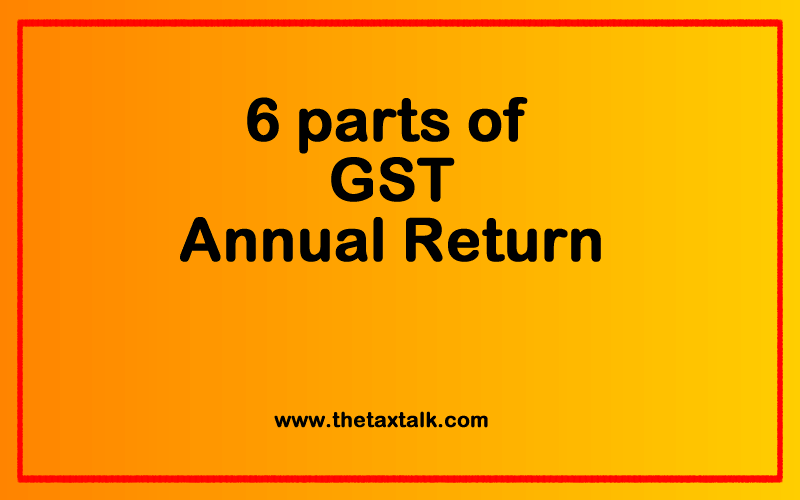 GST Annual Return has been divided into 6 parts as shown below–
Part 1: Basic Information about Financial Year, GST Number, Business name/ Trade name (if any) will have to be given.
Part 2: The information declared in Returns filed during the Financial Year – Details about Supplies, Advances on which GST is applicable and on which GST is not applicable have to be shown separately in 2 different parts.
In this, Supplies, Zero Rated Supplies, Supplies made to Special Economic Zone have to be shown along with their Taxable value, CGST, SGST and IGST respectively applied on them.
The details of Debit notes and Credit notes have to be given. Details about Exempted, Nil Rated and Non-GST Supplies also needs to be provided.
Part 3: Details of ITC declared in the return during the year have to be given. Herein, some details will be auto-populated. Details about Taxable goods, Capital goods and Services along with CGST, SGST and IGST on them will have to be provided. Likewise, if TRANS 1 or TRANS 2 has been filed, details of the same also need to be provided.
In Part 3, ITC Reversal or TRANS Credit Reversal details are to be mentioned. Thereafter, ITC not availed after matching with GSTR 2A will also be declared.
Part 4: Details of Tax Paid during the year showing Tax payable, ITC adjusted as well as cash paid in the form of tax have to be given.
Part 5: Details of any Mistakes or Omissions of Previous year which have been corrected during the period of April to September, 2018 i.e. in Current Year will also be mentioned. Likewise, the tax to be paid on it will also be mentioned.
Part 6: Other information & Details as to-
GST Demand & Refund details,
Purchases made from Composition Dealer
HSN code wise Inward and Outward Supplies and
Late Fees payable or paid.
The information given in GSTR Annual Return form is right and nothing has been concealed thereby giving surety for the details mentioned therein.