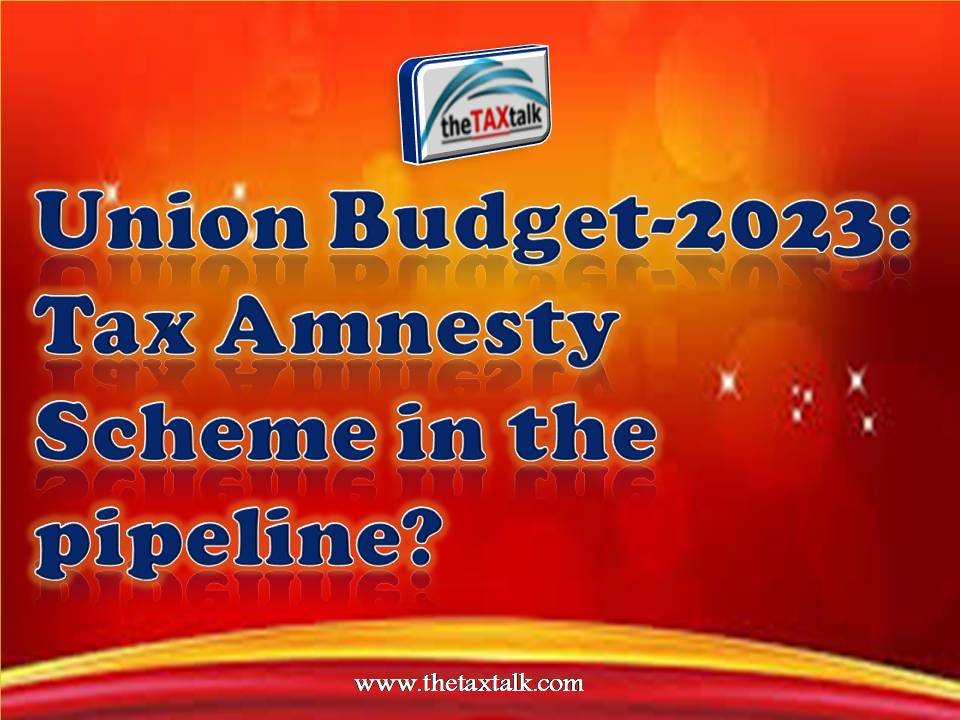 Amidst the increased revenue collection on the tax front, the Union Budget – 2023 may be a budget which may be termed as “Never Before” Budget.

Various concessions and exemptions may be proposed in the Union Budget – 2023 as it is undeniably going to be the Election Budget and the last opportunity for the Government to influence the taxpayers.

Union Budget -2023 may come out with the amnesty scheme for relieving the taxpayers from litigation and disputes.

There has been enormous increase in the litigation & pendency in the tax matters related to income tax & GST. The disputes result in blockage of the funds of the treasury as well as a lot of time being killed in the process by all the stakeholders.

In view of this, the Government may consider coming out with an amnesty scheme to settle the tax disputes pending before various appellate forums. It will ease the burden of the authorities connected with the appellate forum and will also ensure flow of funds for the Government.

As far as Income Tax is concerned, the pending matter before the Commissioner (Appeal) & the matter pending before Income Tax Appellate Tribunal (ITAT) may be considered. This time, the rate for amnesty will be more appealing than the rate offered earlier during the Vivad se Vishwas Scheme. It may be in the range of 10% to 25%.

The process of resolution is proposed to be kept as simple as anything and it may be on the basis of just plain declaration form by the appellant.

The proposed amnesty scheme may be the part of the Union Budget-2023 documents and may be promoted as part of the efforts to reduce the number of litigation at the appellate level. This will also be an opportunity for the taxpayers to clear up their disputed demands and litigation.

On the same line, the Central Board of Indirect Taxes & Customs (CBIC) may also come out with a one-time offer to resolve the pending GST litigation & disputes. There are various disputes and litigation which has arisen due to poor planning and implementation of the GST since 2017. The litigations are on various fronts including classification, valuation, exemptions & procedural aspects. GST litigation is on the rise with each passing week and the amnesty scheme may also cover the cases where the assessment has not been done but may result in future demands and litigation.