Section 127 of the Income Tax Act-1961: There is no absolute right to be assessed in a particular Territory 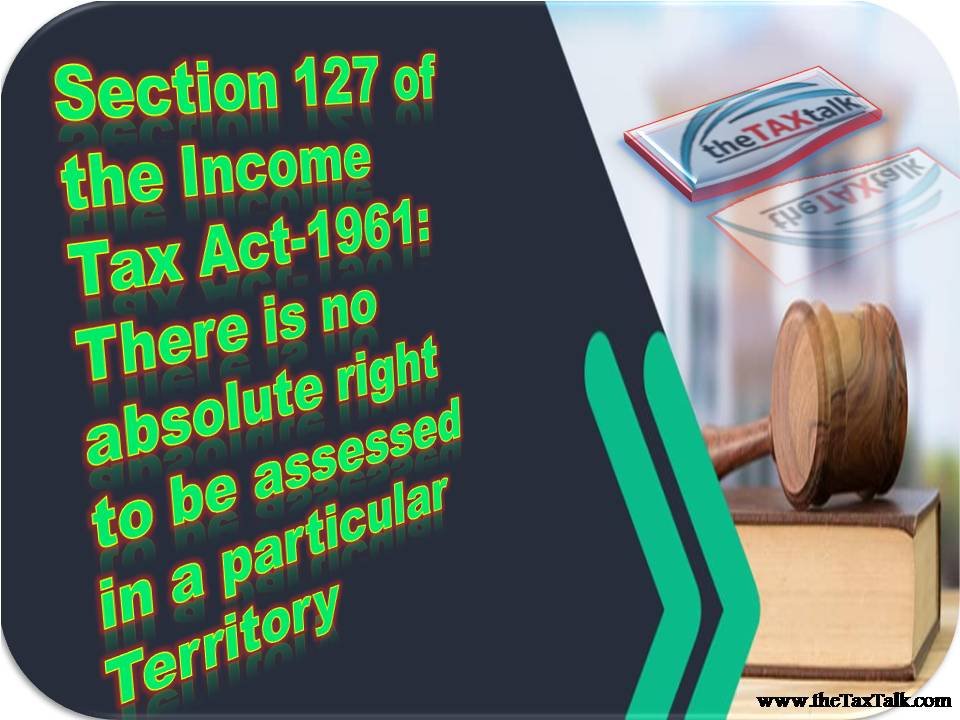 Section 127 of the Income Tax Act-1961: There is no absolute right to be assessed in a particular Territory

Here is an interesting udgement on Section 127 of the Act. Often the question arises on what could be valid

grounds on which transfer of assessment records/jurisdiction can be challenged u/s 127 of the Income-tax Act,1961?

The casw detail is as under:

In this high profile case relating to ex-chief minister of Madhya Pradesh wherein Dr A M Singhvi along with Mr JP Khaitan represented the petitioner before Hon’ble Justice Shekhar Saraf challenging the order of transfer u/s 127 of the Income-tax Act,1961 which was passed in pursuance of a search and survey at the residence of involved persons at Kolkata, Delhi and Bhopal in which several transactions of several crores of rupees were unearthed linking the petitioner and *the Indian National Congress on WhatsApp chat, phone and diary etc.

On these facts the department **wanted to transfer the assessment to Delhi as the petitioner had been mainly staying at Bhopal and Delhi and had maintained bank account also at Delhi.

The petitioner challenged transfer interalia on the ground that there is no live link , the transfer was based on suspicion, there was no search on the petitioner , the petitioner will face difficulty as it had always been assessed in Kolkata.

However, the Ld Judge brushing aside the submissions of petitioner and dismissing the Writ petition upheld the transfer relying on several decisions where it was held  that

1. There is no absolute right to be assessed in a particular territory.

2. The inconvenience of assessee has to be balanced against department’s right to carry its functions and scope of judicial review is limited.

IN THE HIGH COURT AT CALCUTTA

The Hon’ble Justice Shekhar B. Saraf

Therefore, the tax authorities link Rajendra Miglani to the Petitioner.

“9. This judgment was rendered by this  Court on 21-12-1956,  and  we find that in the 1961 Act Section 127 replaced Section 5(7-A) where the legislature has introduced, inter alia, the requirement of recording reasons in making the order of transfer. It is manifest that once an order is passed transferring the case file of  an assessee to another area the order has to be communicated. Communication of the order is an absolutely essential requirement since the assessee is then immediately made aware of the reasons which impelled the authorities to pass the order of transfer. It is apparent that if a case file is transferred from the usual place of residence or office where ordinarily assessments are made to a distant area, a great deal of  inconvenience  and even  monetary loss is involved. That is the reason why before making  an order  of  transfer the legislature has ordinarily imposed the requirement of a show-cause notice and also recording of reasons. The question then arises  whether the reasons are at all required to be communicated to the assessee. It is submitted, on behalf of the Revenue, that the very fact that reasons are recorded in the file, although these are not  communicated  to  the assessee, fully meets the requirement of Section 127 (1). We are unable to accept this submission.

“11. As far as the rationale to transfer, i.e., conduct of coordinated post search investigation and meaningful assessment goes, we are of the opinion that like in the case of first contention, the assessees have failed here  as  well.  The  kind  of  reasoning  required  by  an  order  under Section  127  cannot  be  compared  or  likened  to  a  quasi  judicial order  that  has  adverse  consequences.  One  can  understand  if additions  are  made  on  sketchy  or  bare  minimum  reasons,  they cannot be upheld. However, what is proposed by  an  order  under Section 127 is the transfer of  one or several  assessments from one circle to another, to that extent inconvenience undoubtedly ensue; however, to say that this leads to grave prejudice if detailed reasoning were not given is something that the Court cannot countenance. The consequence would only be that the assessees’ contentions would have to be taken into account by another Assessing Officer who would also have before him or her all other related assessments. In these circumstances, the Court is  unprepared  to  hold  that  the  brief  reasons  relied  upon  by  the revenue does not amount to reasons at all or that they are vague. In such exercise in every case where an order under Section 127 is challenged, there are two interests – those of the assessees who invariably  plead  inconvenience  and  hardship  and  that  of  the revenue  which  would  inevitably  cite  public  interest.  The  Court’s task is to unravel whether in fact the revenue’s contentions are correct and if so reject the assessees’ contentions. On the other hand, if there is no  real  public  interest  and  if  there  are  no reasons even the briefest one, the order cannot be sustained. Conversely, if  there is reasoning and the public interest is discernable, as in this case, the only result can be rejection of the assessees’ contentions.”

“11. In this conspectus and analysis of the law it will be relevant to note that — firstly there is no fundamental right of  an assesse to be  assessed at a particular place. Under Section 124 the assessment must be carried out at the principal place of business but when powers under Section 127 are invoked, territorial nexus becomes irrelevant. Secondly, the determination of the venue of the assessment would be governed by the greatest effectivity for collection of taxes. Thirdly, the decision to transfer cases cannot be capricious or malafide. If the venue is changed from year to year, or periodically for no apparent reason, it would not manifest an instance of exercise of power  which  is not available, but  an example of an abuse of power in the manner in which it is exercised. Fourthly, whilst the convenience of the assessee should be kept in mind, it would always be subservient to the interests of adjudication and collection of taxes.”

Learned Advocate for the petitioner prays for stay of operation of this judgement and order.

Such prayer is considered and rejected.