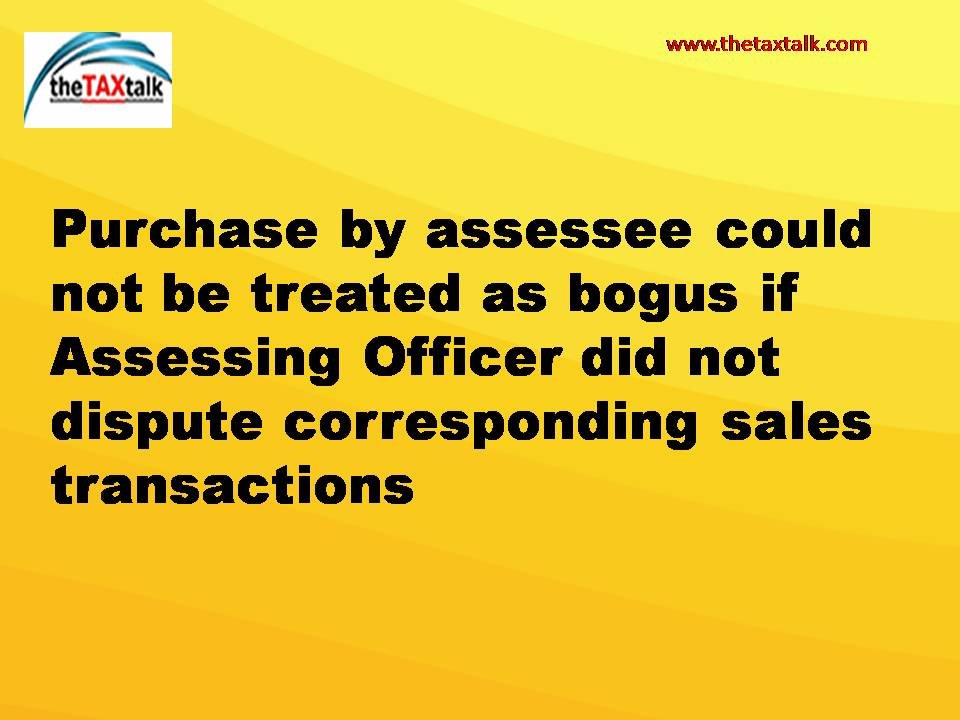 A return of income was filed by the assessee declaring a total income at Rs. 4,47,970/-. The Sales Tax Department of the Government of Maharashtra provided information to the Assessing Officer giving names, addresses and details of persons, who had provided entries of bogus purchases to several parties and that assessee was also one of beneficiaries of such bogus bills of purchases.. Based upon the information so received, the Assessing Officer issued notice under section 148 of the Act on account of alleged bogus purchases, and the order of assessment under section 143(3) r/w section 147 of the Act was passed on 30.02.2015 and total income assessed at Rs. 1,46,82,548/-. The Assessing Officer thus made an addition of Rs. 1,42,34,578/- on account of alleged bogus purchases from Hawala dealers/parties. It was noted that Commissioner (Appeals) observed that if purchases were bogus, it would be impossible for assessee to complete business transaction and corresponding sales would also be bogus, thus, unless corresponding sales were held to be bogus, purchases also could not be bogus, rather it would be a case of purchase from bogus entities/parties. The CIT (Appeals), however, was of the opinion that the gross profit shown by the assessee at 0.69% was very low in that particular kind of trade and, therefore, estimated the gross profit at 5% and further directed the Assessing Officer to make an addition in the gross profit ratio and delete the balance addition which had resulted in an addition of Rs. 10,59,974/-. Further, Tribunal noted that case of revenue was based on investigation carried out by sales tax department only and that no cross-examination of persons whose names had figured in list so prepared by sales tax department was allowed. On facts, Tribunal was justified in deleting addition made on account of bogus purchases.

Held : From the above facts it is thus clear that the CIT (Appeals) partially allowed the appeal of the assessee on the ground that the Assessing Officer had not disputed the sales and, therefore, this was not a case of bogus purchases, inasmuch as if the purchase was bogus, it would not be possible for assessee to complete the transaction by way of sale, unless it could be shown from the record that the corresponding sale was also a sham transaction.

We are in agreement with the view expressed by the CIT (Appeals) that, if the purchases are bogus, it would be impossible for the assessee to complete the business transaction and that if the purchase is bogus, the corresponding sale also must be bogus or else the transaction would be impossible to complete and as a necessary corollary, unless the corresponding sale is held to be bogus, the purchase also cannot be held to be bogus, rather it would be a case of purchase from bogus entities/parties. That view has been upheld by the Tribunal in principal while dismissing the appeal of the Revenue. In view of the above, we are of the opinion that the questions of law proposed as (a), (b), and (c) in the appeal cannot be said to be substantial questions of law.

Insofar as the question of law framed as (d) is concerned, we find that the Tribunal has not addressed the issue of adopting the gross profit rate of 5% on the alleged Hawala purchase of Rs. 2.45 crores as against the rate of 0.69% declared by the assessee, despite the fact that the CIT (Appeals) had specifically gone into that question in its order dated 18.08.2015 and had directed the Assessing Offocer to make 5% addition in the gross profit ratio, while deleting the balance addition.

We, therefore, deem it appropriate to remand the matter back to the Tribunal only to the limited extent of going into that issue. Parties to appear before the Tribunal on 05.12.2022 and orders to be passed thereupon, preferably within a period of three months thereafter. In the result, both the appeals are, accordingly, disposed of. (Related Assessment years : 2010-11 and 2011-12) [PCIT v. Nitin Ramdeoji Lohia (2022) 145 taxmann.com 546 (Bom.)]

If the assessee has maintained regular books of accounts, bills, vouchers and day to day stock register having complete quantitative details, addition U/s 68 is not proper.

Applicability of ITR forms for taxpayer – Summarised in Chart

What if you forget to verify your Income Tax Return?