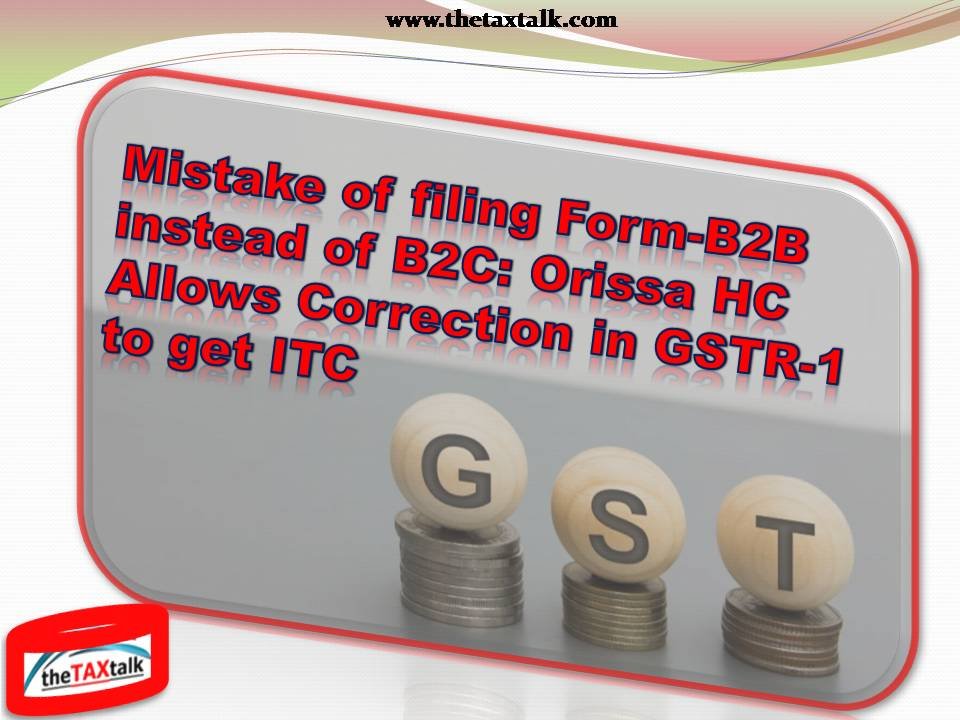 Here is a landmark judgement with regard to Mistake of filing Form-B2B instead of B2C.

Orissa HC in the case of Shiv Jyoti Construction allowed the Correction in GSTR-1 to get ITC. Though the current circular No 183 takes care of such ITC based on parties’ declaration or CA certificate, it is only for 2017-18 & 2018-19, the judgement should be helpful for subsequent years

In the present case, theIssue was as under:

The Petitioner, Shiva Jyoti Construction approached the Court seeking a direction to the department to permit the Petitioner to rectify the GST Return filed for the period September, 2017 and March 2018 in Form-B2B instead of B2C as was wrongly filed under GSTR-1 in order to get the Input Tax Credit (ITC) benefit by M/s. Odisha Construction Corporation Limited (OCCL), the principal contractor. The department contended that once the deadline for rectification of the Forms was crossed, then no further indulgence could be granted to the Petitioner.

The fact remains that by permitting the Petitioner to rectify the above error, there will be no loss whatsoever caused to the Opposite Parties. It is not as if that there will be any escapement of tax. This is only about the ITC benefit which in any event has to be given to the Petitioner. On the contrary, if it is not permitted, then the Petitioner will unnecessarily be prejudiced.” The Court permits the Petitioner to resubmit the corrected Form-B2B under GSTR-1 for the aforementioned periods. Once the corrected Forms are received manually, the Department will facilitate the uploading of those details in the web portal.