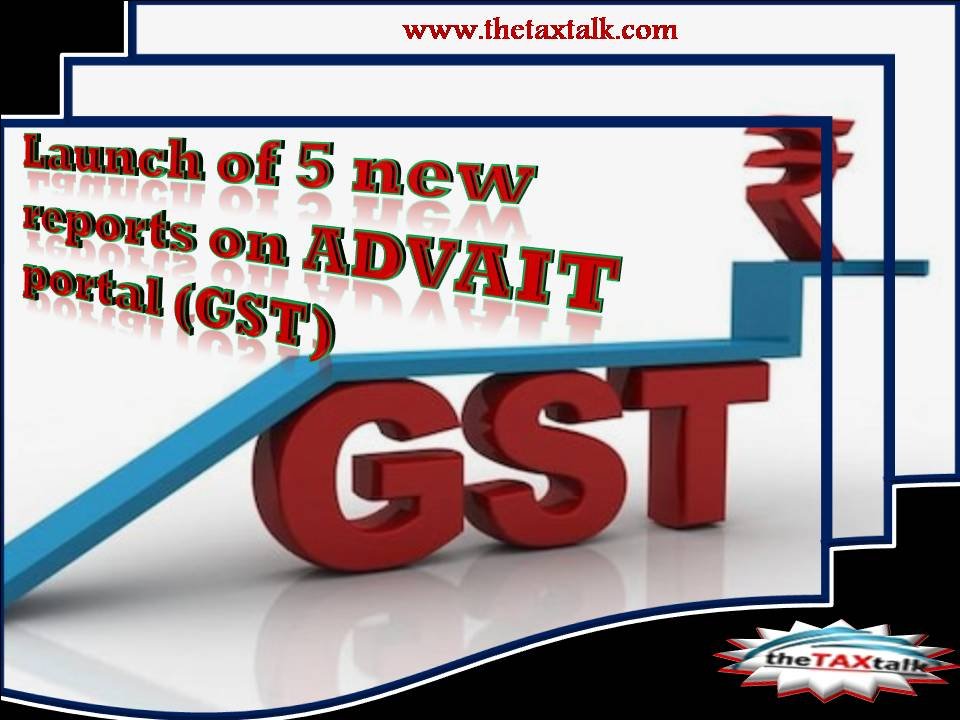 It stand for Advanced Analytics in Indirect Taxation (ADVAIT). This is the project launched by CBIC to fulfill the mandate of revenue mobilization and tax policy formulation. The main objective of ADVAIT is to enhance indirect tax revenue, increase taxpayer base and support data driven tax policy formulation.

Directorate General of Systems & Data Management has introduced 5 more reports, in ADVAIT to monitor the taxpayer’s performance, which are enumerated below :

The copy of the communication to the field personnel is attached hereunder:

The Joint Secretaries/Commissioners of CBIC.

ADVAIT has a variety of reports, dashboards and data science models that offer deep insights into taxpayer behaviour and compliance. Continuing with its endeavour to promote data-driven action, ADVAIT team is happy to announce the launch of five new GST reports on the portal. The reports are summarised below:

II.  Amount of ITC availed after the time limit prescribed under Section 16(4) – V1 (GST_RPTPDR_155): Section 16(4) of CGST Act, 2017 provides that “A registered person shall not be entitled to take input tax credit in respect of any invoice or debit note for supply of goods or services or both after the thirtieth day of November following the end of financial year to which such invoice or debit note pertains or furnishing of the relevant annual return, whichever is earlier”. The said section was amended by Finance Act 2022, which earlier provided that the time limit to avail ITC shall be earlier of ‘Due date of furnishing the return under section 39 for the month of September following the end of the financial year to which such invoice/debit note pertains, or Furnishing of the relevant Annual Return’. For 2017-18, the last date was the due date of furnishing of the return for March 2019.

This report provides details of ITC availed after the prescribed time limit under Section 16(4) of CGST Act, 2017 for selected GSTIN for a financial year. The ITC availed will be bifurcated into IGST, CGST, SGST and Cess. The details of due dates for availment as per Section 16 (4) are detailed below:

The report is based on broad aggregation only to highlight notable cases, and not on invoice data. There may be cases where the ineligible credit availed may not be captured by the report due to GSTIN specific last date of filing of return being earlier than the generalised date. Due caution may be exercised by officers in checking the eligibility of ITC being availed by the taxpayers, as per law.

III.  Amount of ITC availed after the time limit prescribed under Section 16(4) – V2 (GST_RPTPDR_186): This report has been developed to cover the taxpayers who might have been left out in the V1 – Report GST_RPTPDR_155, wherein due to multiple due dates for filing of GSTR 3B based on turnover, 24th October of subsequent year has been considered as the due date for availing ITC for FY 2019-20 and 2020-21. To bridge the gap for those taxpayers for whom due date of availing ITC for FY 2019-20 & 2020-21 is 20th October of subsequent year, this second version has been developed.

The due dates considered for availment of ITC in this report are tabulated below:

The report is based on broad aggregation to highlight notable cases, and not on invoice data. There may be cases where the ineligible credit availed may not be captured by the report due to GSTIN specific last date of filing of return being earlier than the generalised date. Due caution may be exercised by officers in checking the eligibility of ITC being availed by the taxpayers, as per law.

IV.  Tax payment by DRC-03 (GST_RPTPDR_182): This report has been envisaged to enable jurisdictional officers to check the payments made by taxpayers under DRC- 03 in one place. The report provides users with the details of tax paid through all DRC-03 forms for the selected financial year. It is available as part of the ‘Know Your Taxpayer’ dashboard. Users also have the option to view the details of a specific DRC-03 (bifurcated into various columns viz. Place of supply, amount of tax, ledger utilized, etc.). With the addition of this KPI, jurisdictional officers now have a holistic view of payments made by taxpayers under the Know Your Taxpayer

V.  GSTR 9: Difference between tax paid and payable (GST_RPTPDR_181): This report gives a comparison between tax paid and tax payable as populated in the GSTR-9 filed by taxpayers under the selected jurisdiction for a financial year. Input filters for All India/ZCDR, financial year, ‘Registered With’ & GSTIN have also been The report also gives drill down details of the payments made against such difference and also other payments to give a more informed view to the officers.

2.  It is requested that the details of the above-mentioned reports may be circulated amongst Data errors, if any, may be brought to the notice of the ADVAIT helpdesk’s email ID: www.thetaxtalk.com

This issues with the approval of Pr. DG (Systems).

Copy for kind information to: