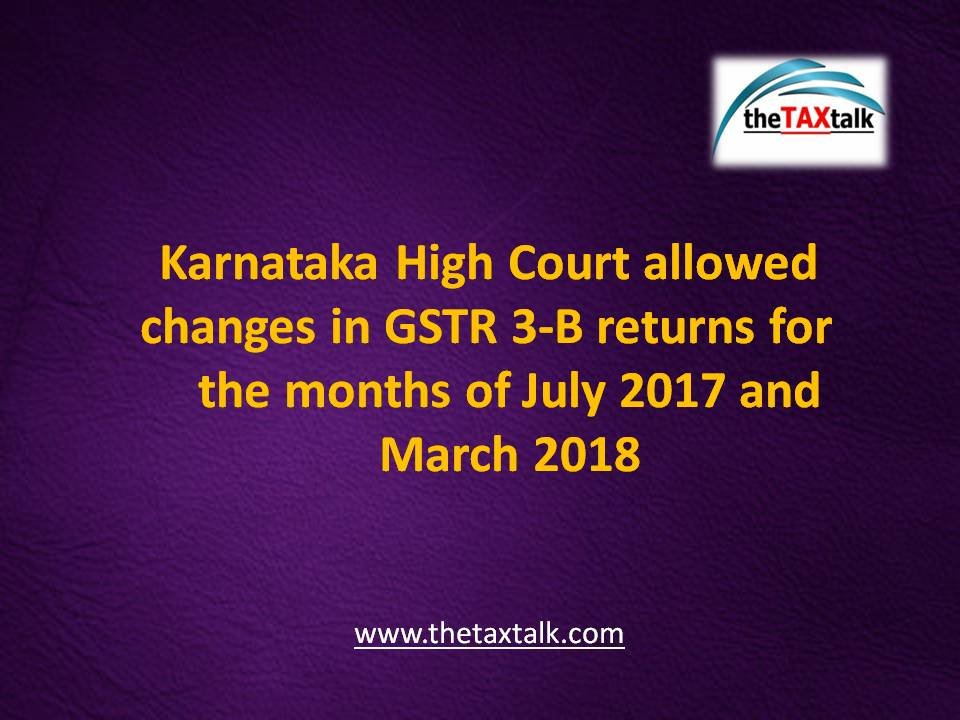 There is a landmark ruling of Karnataka High Court in the case of Orient Traders-2023 (1) TMI 838 wherein the petitioner is permitted to make the necessary changes to its GSTR 3-B returns for the months of July 2017 and March 2018.

Some important remarks made by the Court:

1. There can be no dispute regarding the fact that the introduction of GST required a major overhaul of the indirect tax regime, including the number and formats of statutory returns that were to be filed and that it was expected that dealers across the country would take a reasonable amount of time to readjust to the new system.

2. In the instant case, the petitioner appears to have entered certain figures in the wrong column of his GSTR 3-B returns for the months of July 2017 and March 2018 i.e., during the very first financial year after the introduction of GST. The copies of the returns submitted / filed by the petitioner clearly demonstrate and evidence the innocuousness of the errors committed by the petitioner.

3. A perusal of the same makes it apparent that ITC, which is admittedly available to the petitioner has been entered under the wrong column; the material on record also discloses that the said errors are entirely bona fide and inadvertent and that a lenient view is required to be taken, particularly since the tax periods involved relate to the very first year of the GST regime. The judgment of the Apex Court in Bharti Airtel’s case cannot be made applicable to the facts of the case.

4. The authorities must avoid a blinkered view while adjudicating/assessing the tax liability of a dealer under the Act. In the instant case, the respondents have, in the absence of a prescribed GSTR 2-A for the relevant tax periods, referred to the IGST import figures reflected in the ICE GATE portal of the Customs Department for all the months except those in which the errors have been committed. This clearly indicates that the respondents are aware of the actual figures and that there is an error committed by the petitioner but has chosen to selectively ignore the IGST import amounts reflected in the ICE GATE portal for the tax periods in dispute, which is yet another circumstance to uphold the claim of the petitioner.

5. It is made clear that the above order is in the peculiar facts and circumstances of the case, particularly since the tax periods involved relate to the first year of introduction of GST and this order shall not be treated as a precedent nor have any precedential value for any purpose whatsoever.