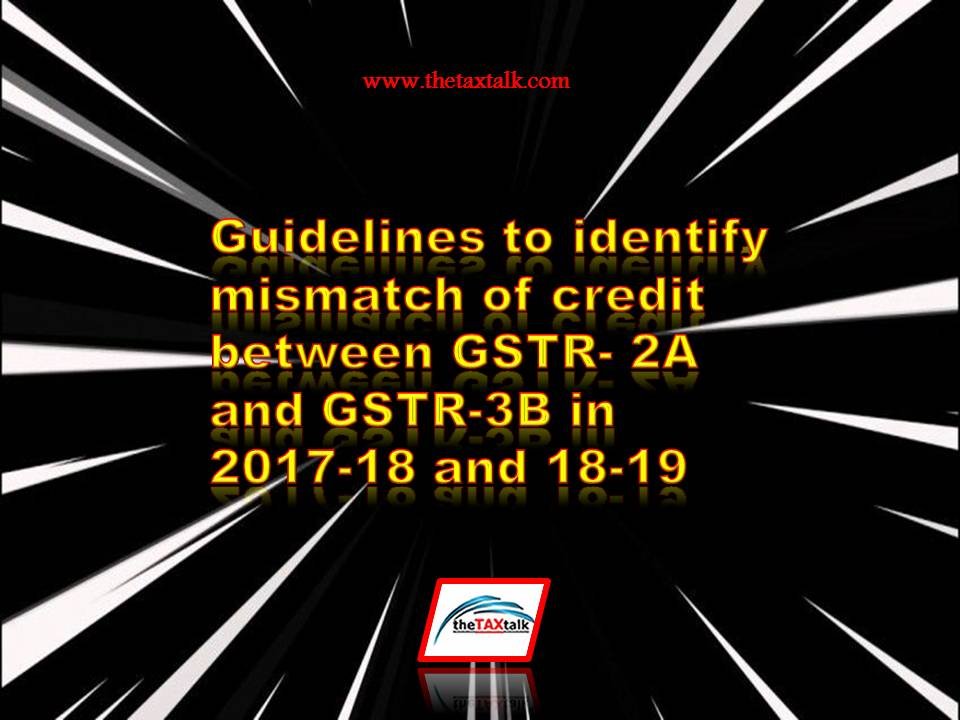 Finally, CBIC has issued a circular detailing the guidelines to identify mismatch of credit between GSTR- 2A and GSTR-3B in 2017-18 and 18-19. Taxpayers were flooded with notices for 2A – 3B mismatch for 17-18 and 18-19, even though the amendment in Section 16(2) is applicable from 01.01.2022 and there are cases where the judgment has been pronounced in the favour of the assessee.  This circular has put an end to all such pending litigations.
As per circular,

Government of India Ministry of Finance Department of Revenue

Central Board of Indirect Taxes and Customs GST Policy Wing

Section 16 of the Central Goods and Services Tax Act, 2017 (hereinafter referred to as “CGST Act”) provides for eligibility and conditions for availing Input Tax Credit (ITC). During the initial period of implementation of GST, during the financial years 2017-18 and 2018-19, in many cases, the suppliers have failed to furnish the correct details of outward supplies in their FORM GSTR-1, which has led to certain deficiencies or discrepancies in FORM GSTR-2A of their recipients. However, the concerned recipients may have availed input tax credit on the said supplies in their returns in FORM GSTR-3B. The discrepancies between the amount of ITC availed by the registered persons in their returns in FORM GSTR- 3B and the amount as available in their FORM GSTR-2A are being noticed by the tax officers during proceedings such as scrutiny/ audit/ investigation etc. due to such credit not flowing to FORM GSTR-2A of the said registered persons. Such discrepancies are considered by the tax officers as representing ineligible ITC availed by the registered persons, and are being flagged seeking explanation from the registered persons for such discrepancies and/or for reversal of such ineligible ITC.

facts and circumstances of each case and shall not be used in the interpretation of the provisions of law.