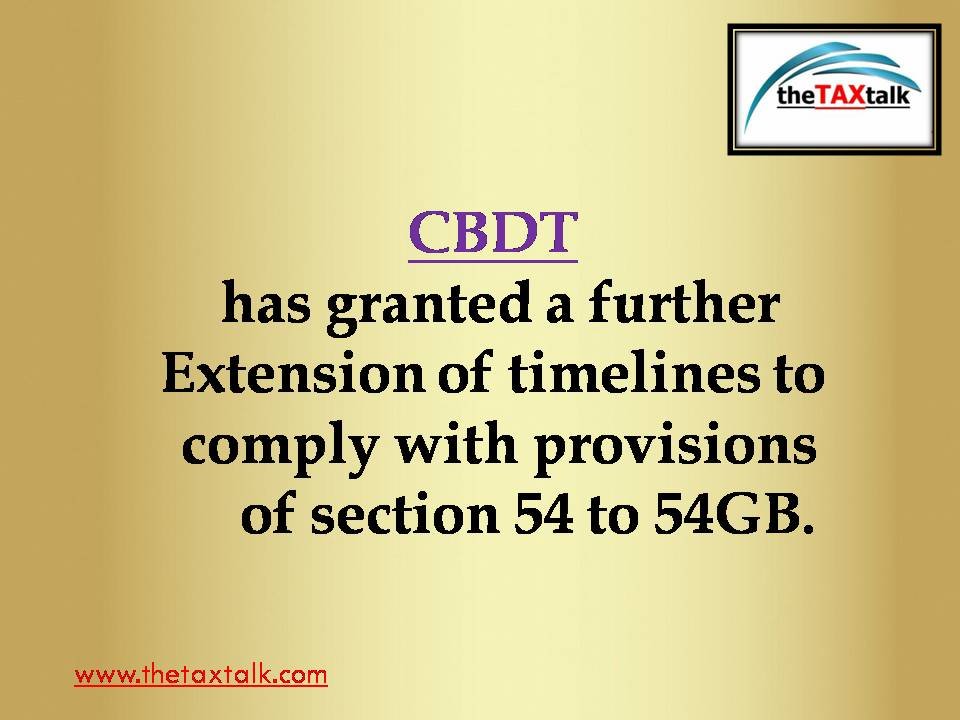 Subject: Extension of time limit for compliance to be made for claiming any exemption under

The Central Board of Direct Taxes (hereinafter referred to as “the CBDT”) had vide Circular No. 12 of2021 dated 25.06.2021 provided relaxation in respect of certain compliances to be made by taxpayers including inter alia investment, deposit, payment, acquisition, purchase, construction or such other action, by whatever name called. for the purpose of claiming any exemption under the provisions contained in Section 54 to 54GB orthe Incometax Act, 1961 (hereinafter referred to as “the Act”). By point 7 of the Circular it was provided that the aforementioned compliances for which the last date of such compliance fell between 01″ April, 2021 to 29′” September 2021 (both days inclusive), may be completed on or before 30′” September, 2021.

COVID-19 pandemic and resultant restrictions imposed, causing genuine hardship faced by taxpayers in making the aforementioned compliances under the Act, the CBDT, in exercise of its power under Section 119 of the Act, hereby provides that the compliances to be made by the taxpayers such as investment, deposit, payment, acquisition, purchase.

construction or such other action, by whatever name called, for the purpose of claiming any exemption under the provisions contained in Section 54 to 54 OB of the Act, for which the last date of such compliance falls between 01″ April, 2021 to 28th February, 2022 (both days

Diredor to the Government of India.

3. Chairman (CBDT)& All Members of CBDT.

7. Web Manager, with a request to place the order on official Income-tax website.

11 . All Chambers of Commerce.

Director to the Government of India.