Need for dispute resolution scheme and unattractiveness of Settlement Commission : 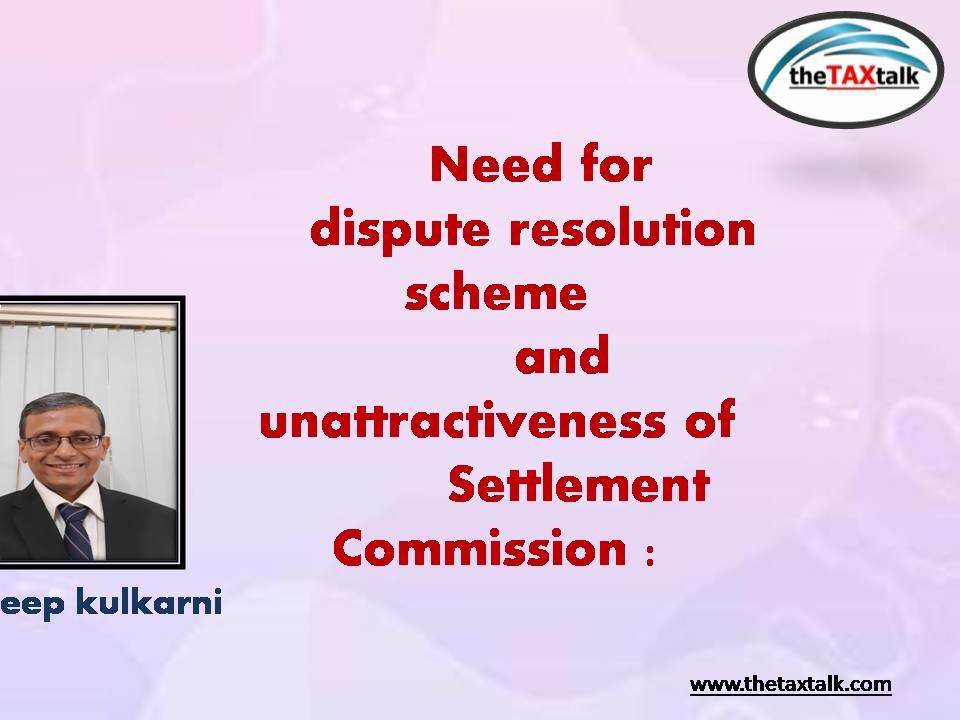 Need for dispute resolution scheme and unattractiveness of Settlement Commission :

Last week CBIC constituted benches of Settlement Commission. Some media reported it as if it is some scheme to resolve old CE/ST/Cus matters beneficially. It is not so.

The Settlement commission is there since long. It is constituted under Customs Act and C. Excise Act. It deals with cases under CE/ST/Cus.

The above conditions make SC unattractive to taxpayers and it defeats the very purpose – quick dispute resolution.

The need for dispute resolution scheme:

Recently, there are thousands of ST orders and appeals passed and filed because of ITR-TDS cases. And few thousands will be added in coming year or two. If the Govt wants to realize the revenue, it should come out with a proper reasonable dispute resolution scheme where penalty and interest will be waived and there may be some concession in tax. This may be launched as the final scheme for CE/ST matters.

Is it injustice to honest taxpayers ?

No. We are speaking about the dispute resolution scheme. This scheme should not cover “arrears” – that is the admitted tax liability. When we are speaking about “disputed” amount, its outcome is uncertain for both sides. And it is not the case that the amount is already payable by the taxpayer and it is waived. Therefore, there is no injustice or inequality vis a vis an honest taxpayer.

Such scheme, if introduced, will be a win win situation both for the Govt. and the Trade. It will clear the thousands of diapute cases pending and to those to be added soon. And it will yield good revenue to the Govt. and will relieve the taxpayers of the uncertainties and huge liabilities.