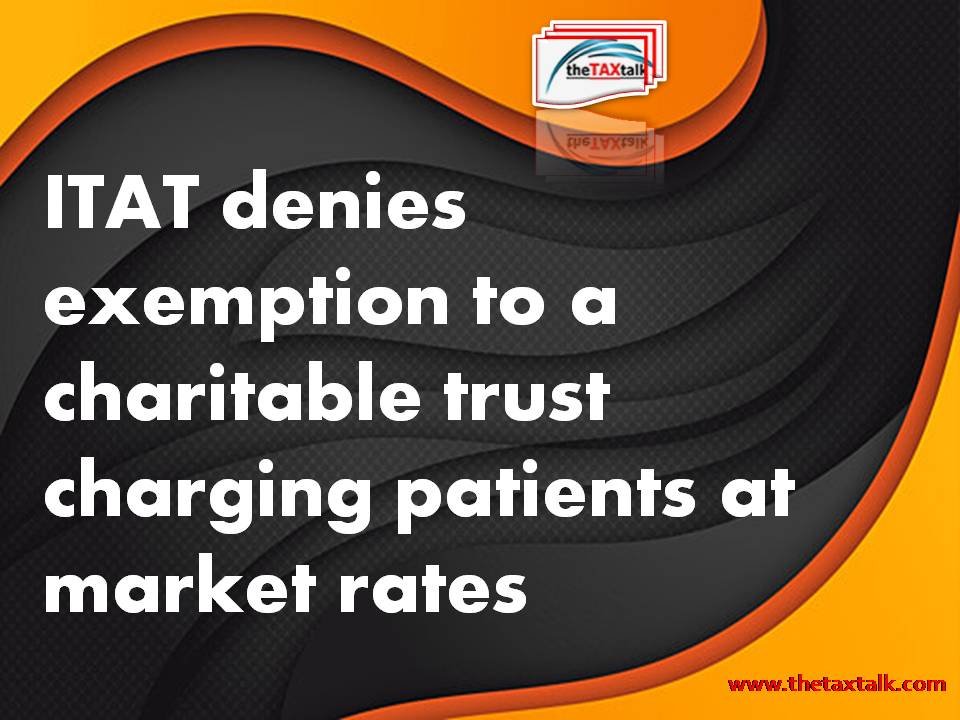 IN THE INCOME TAX APPELLATE TRIBUNAL

“1. The  order  of  the  Commissioner  of  Income  Tax  (Exemptions)  is contrary to the provision of law and is bad in law.

5.1.                 Facts of the case, in brief, are that till 02.08.2018 assessee was a private limited company and on 03.08.2018, assessee converted the said company into a Section 8 Company and changed the name to “Fernandez Hospital”. However, while filing Form 10A/10G online, the assessee had given the name as “Fernandez Hospital Foundation”. The certificate issued by the Registrar of Companies was given to the assessee foundation as “Fernandez Hospital”. Further, the PAN data shows that the PAN was obtained in the name of “Fernandes Foundation”. Due to the mismatch in the name of the assessee from ROC to Form 10A/10G, a notice dt.28.06.2019 was issued to the assessee to the address mentioned in Form 10A / 10G to appear and produce its original Memorandum of Association (MoA) Trust Deed for verification and to furnish a detailed reply on specific points on or before 18.07.2019. In response thereto, assessee vide letter dt.18.07.2019 had filed certain documentary evidence. On perusal of the evidence filed by the assessee, the application of assessee was rejected by the ld.CIT(E) vide order dt.30.08.2019 treating the same as non-est due to ambiguity with regard to the name of assessee company and also list of directors. Further it was pointed out by the ld.CIT(E) that the assessee is involved in activities which are in the nature of trade and provides services at market rates. Besides that assessee had also violated the provision of section 13 of Income Tax Act 1961, as huge amounts were paid to the directors/ interested persons.

“62. Section 10(23C) has many provisos. The first proviso enjoins the concerned fund, trust or institution to apply to the concerned authority i.e., the Commissioner, for grant of approval and sets out the timeline for doing so. These include situations where a trust or institution was granted approval up to a particular point in time and sought extension. The second proviso by sub-clause (ii) requires the Commissioner to make such enquiries to specify about the genuineness of the activities of the fund, trust or institution and compliance of such requirements of other laws in force by such fund, trust or institution. Upon considering the materials the Commissioner or the concerned authority can pass an appropriate order granting approval for a specific period of time, or reject the application. The second proviso importantly indicates that before granting approval to any fund, trust or institution, the Commissioner or the concerned authority ‘may call for such documents’ including audited annual accounts or information from the fund, or trust or institution etc., as is deemed necessary for recording satisfaction about the genuineness of the activities. The judgment in American Hotel (supra) dealt extensively with the effect of the provisos to Section 10(23C). While doing so, the court made certain remarks with respect to the effect of these provisos characterizing a few of them as those dealing with the stage of considering applications for approval or registration and other as those dealing with application of income or receipts of the trust. In respect of the latter, this court was of the opinion that the question of application of income or profits could arise only at the stage of assessment. The court was also of the opinion that the audited books of account would be of little or no relevance at the stage of registration or approval.

Further, the acknowledgement of Income Tax Returns for the last three years of the above four Directors have been filed. The assessee has not filed any copy of amendment being registered before the Registrar of Societies.”

Further, the Room Charges (per day) are as follows :

The procedure charges are as follows :

Thus. the assessee’s rates for diagnostics, procedure charges etc. are more than the market rates. Thus, the activity of assessee cannot be termed as charitable activity. It is a commercial activity.

Application for grant of the exemption under sub- clauses (iv), (v), (vi) and (via) of

Order pronounced in the Open Court on 8th December, 2022.