Can the benefit of section 43CA(3) be denied in a case where the initial amount is received by cash though subsequent amounts are received by cheque? 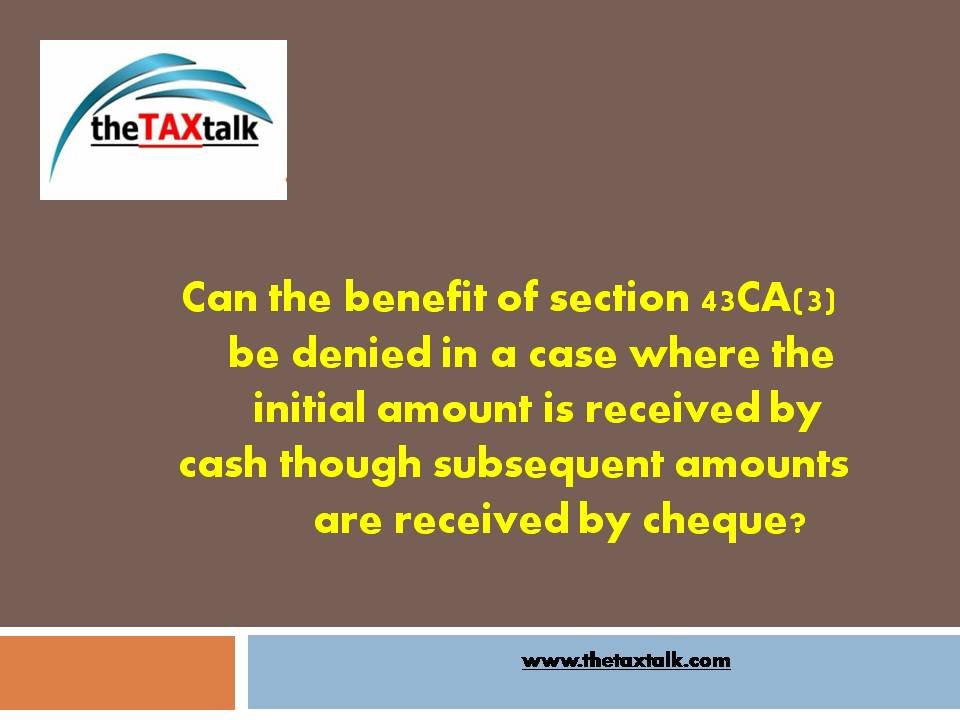 Can the benefit of section 43CA(3) be denied in a case where the initial amount is received by cash though subsequent amounts are received by cheque?

Income tax law is full of twists and turns. There are various notional tax provisions in the income tax law.  One such provision is with regard to the purchase and sale of immoveable property below its stamp duty valuation.  If the difference is more than 10% then the buyer as well as seller is liable for tax on such difference. There is an exception U/s 43CA (4).

Sub-section (4) of section 43CA states that the provisions of sub-section (3) shall apply only when the consideration or part thereof has been received by any mode other than cash on or before the date of agreement for transfer of asset.

There may be a situation where the assessee may have entered into an agreement for transfer of asset say on 1.7.2022 and on that date received a sum of Rs 11,000 in cash towards part of consideration under the said agreement and two days later received further sum of Rs. 2,00,000 by cheque under the same agreement.

Can the benefit of sub-section (3) be denied on the ground that the conditions prescribed by sub-section (4) are not satisfied?

There is no specific case law on the issue as of now.

However, it appears that the Court in such a case may take a liberal view and hold that if it is otherwise evident that the assessee is entitled to benefit of sub-section (3) the same may not be denied only on the ground that the initial amount was received by cash.

Possibly the assessee may have to explain the reason for receiving the amount by cash.

The explanatory memorandum behind introduction of section 43CA(3) may be of help in such a case.

Let us hold on till the judiciary affixes its stamp on the issue.