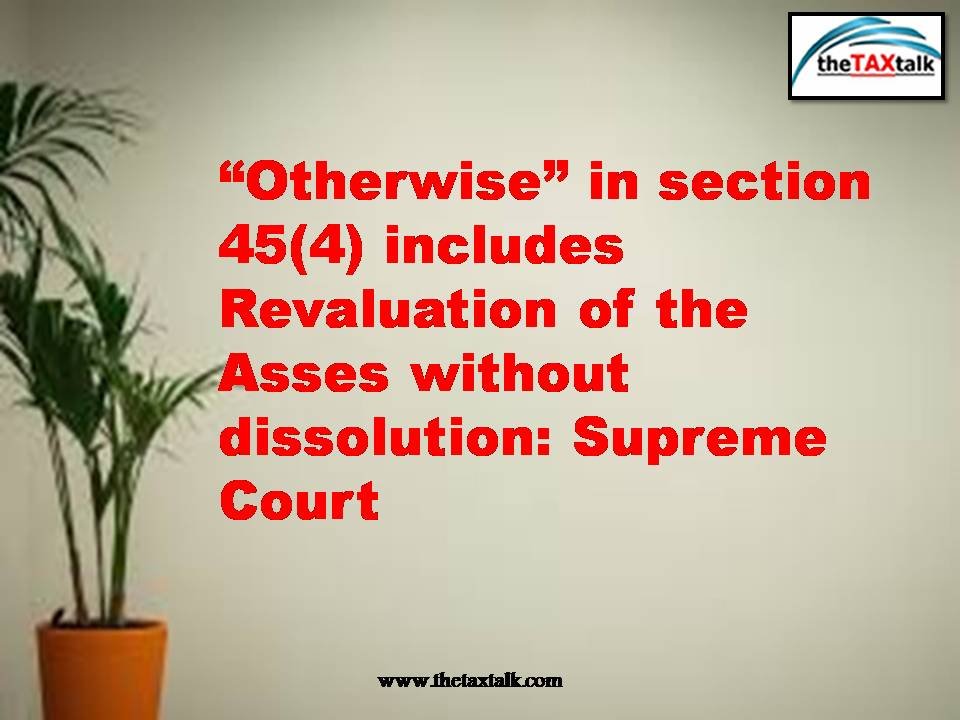 The law takes its own recourse over a period of time. Finally, here is one more related to section 45(4) of the Income Tax Act-1961. One of the most common issues was with regard to taxation U/s 45(4) in case of revaluation of the fixed assets. There was a controversy as to whether the amount credited on account of revaluation of fixed assets and credited to the partners’ account is liable to be taxed u/s 45(4) of the Income-tax Act,1961 or it is not taxable?

The issue is finally settled by the Supreme Court which has held that upon revaluation of fixed assets, the credit which is made to the Partners’ capital account is liable to be taxed u/s 45(4).

The relevant portion of Section 45, with which we are concerned, is sub-section (4), which reads as under:-

“(4) The profits or gains arising from the transfer of a capital asset by way of distribution of capital assets on the dissolution of a firm or other association of persons or body of individuals (not being a company or a cooperative society) or otherwise, shall be chargeable to tax as the income of the firm, association or body, of the previous year in which the said transfer takes place and for the purposes of section 48, the fair market value of the asset on the date of such transfer shall be deemed to be the full value of the consideration received or accruing as a result of the transfer.”

In this case, the respondent assessee, a partnership firm originally consisted of four partners (all brothers) engaged in the business of Dyeing and Printing, Processing, Manufacturing and Trading in Clothing. Under the Family Settlement dated 02.05.1991, the share of one of the existing partners – Shri M.H. Doshi having 25% profit share in the firm was reduced to 12% and, for his balance 13% share, three new partners were admitted namely, viz., Smt. Ranjan Doshi (11%), Shri Prakash Doshi (1%) and Shri Rajeev Doshi (1%). It appears that thereafter, Shri M.H. Doshi, Shri Manohar Doshi and Shri V.H. Doshi retired from the partnership and reconstituted the partnership firm consisting of the partners namely, viz., Shri Hasmukhlal H. Doshi, Smt. Rajan H. Doshi, Shri Prakash H. Doshi & Shri Rajiv H. Doshi.

Assessee submitted that there can be no income just due to revaluation of capital asset unless the capital asset is also transferred. It is submitted that whenever an asset is revalued, even as per the accounting norms the corresponding notional surplus due to revaluation is required to be credited to revaluation reserve account in case of companies or credited to capital account of partners in case of partnership firm. This is only notional or book entry which is not represented by any additional tangible asset or income. It is submitted that once it is established that there is no profit or gain accrued to firm on revaluation resulting in real income, there can also be no distribution of such profits and gains and therefore, the same cannot be added in the income of the partnership firm as capital gains

Department pleaded that in that context, it was held that the word “otherwise” takes into its sweep not only cases of dissolution but also cases of subsisting partners of a partnership, transferring assets in favour of a retiring partner. It is submitted that in this context, the Bombay High Court in A.N. Naik Associates and Ors has held that Section 45(4) shall be attracted.

One may note that the Bombay High Court in the case of A.N. Naik Associates and Ors., (supra) had an occasion to elaborately consider the word “OTHERWISE” used in Section 45(4). After detailed analysis of Section 45(4), it is observed and held that the word “OTHERWISE” used in Section 45(4) takes into its sweep not only the cases of dissolution but also cases of subsisting partners of a partnership, transferring the assets in favour of a retiring partner. While holding so, it is observed in paragraphs 14, 21, 22 and 24 as under:- “14. Pursuant to the inclusion of sub-section (4) in section 45, on the dissolution of a partnership the profits or gains arising from the transfer of capital asset are chargeable to tax as income of the firm. It is contended on behalf of the assessee that even after introduction of section 45(4), the position will be the same as the definition clause i.e. namely section 2(47) has not been amended. Secondly it is contended that the expression “otherwise” must be read edjusdem generis with the expression dissolution of firm. So considered, there is no dissolution on the firm. So considered, there is no dissolution on the facts of the case. On behalf of the revenue, it was, however, argued that the amendment was brought about to remove the mischief occasioned by parties avoiding to pay tax, considering the law as declared and to plug the loopholes. The expression otherwise must be read to mean transfer of capital assets of the assessee firm include to a partner. As the section is a self contained code, there was no need to amend the definition of transfer under section 2(47) of the Act. The Position therefore, will have to be examined in the context of the law as amended after 1988………………..

The order passed by the Assessing Officer is hereby restored. Present appeals are accordingly allowed.

However, in the facts and circumstances of the case, there shall be no order as to costs.”

The issue is finally settled by the Supreme Court which has held that upon revaluation of fixed assets, the credit which is made to the Partners’ capital account is liable to be taxed u/s 45(4).