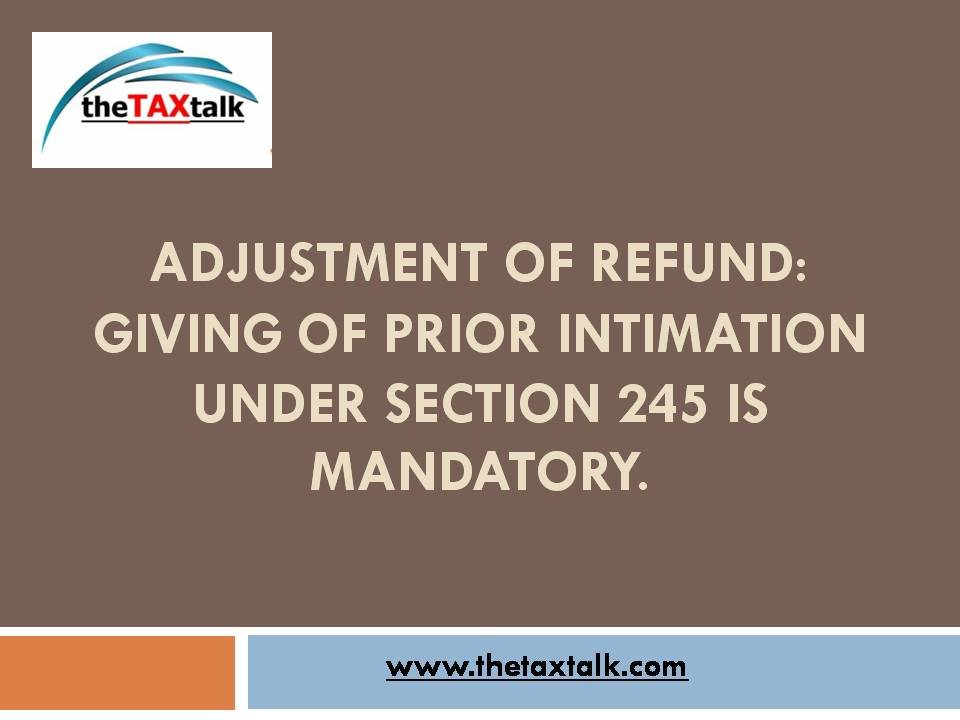 Adjustment of refund: Giving of prior intimation under section 245 is mandatory.

Recently , Mumbai HC in the case of

Has held that  Giving of prior intimation under section 245 is mandatory.

The case was with regard to Recovery & Set off of refund against tax remaining payable.

Knowledge of this illegal adjustment was also stated to have been acquired by petitioner when petitioner downloaded Form No.26AS.

With above facts , the HC held as under:

Section 245 envisages that when a refund is found to be due to any person Revenue can set off/adjust amount to be refunded or any part of that amount, against sum which remains payable by person to whom refund is due, after giving an intimation in writing to such person of action proposed to be taken under this section.

In Hindustan Unilever Ltd. Vs. Deputy Commissioner of Income-Tax and Others, [2015] 377 ITR 281 (Bom.), it was held that purpose of giving prior intimation under section 245, was to enable a party to point out factual errors or some further developments for example that there was a stay of demand, or that there was a Supreme Court’s decision covering demand, which is subject matter of a pending appeal which would not warrant an adjustment of refund against pending demand.

It was also held that where a party raises such issues in response to intimation, officer of Revenue exercising powers under section 245 must record reasons why objection was not sustainable and also communicate it to said party and that this would ensure that power of adjustment under section 245 is not exercised arbitrarily.

In present case, it can be seen that allegation that there was no prior intimation under section 245 has remained unrebutted as no proof of any such prior intimation was placed on record by Revenue.

Following decisions (supra), impugned action of respondent No.2 in making adjustments of amount for assessment year 2008-09 against alleged outstanding demands for assessment years 2014-15 and 2015-16 is bad and illegal and is accordingly quashed.

With this , the assessee’s appeal was allowed.