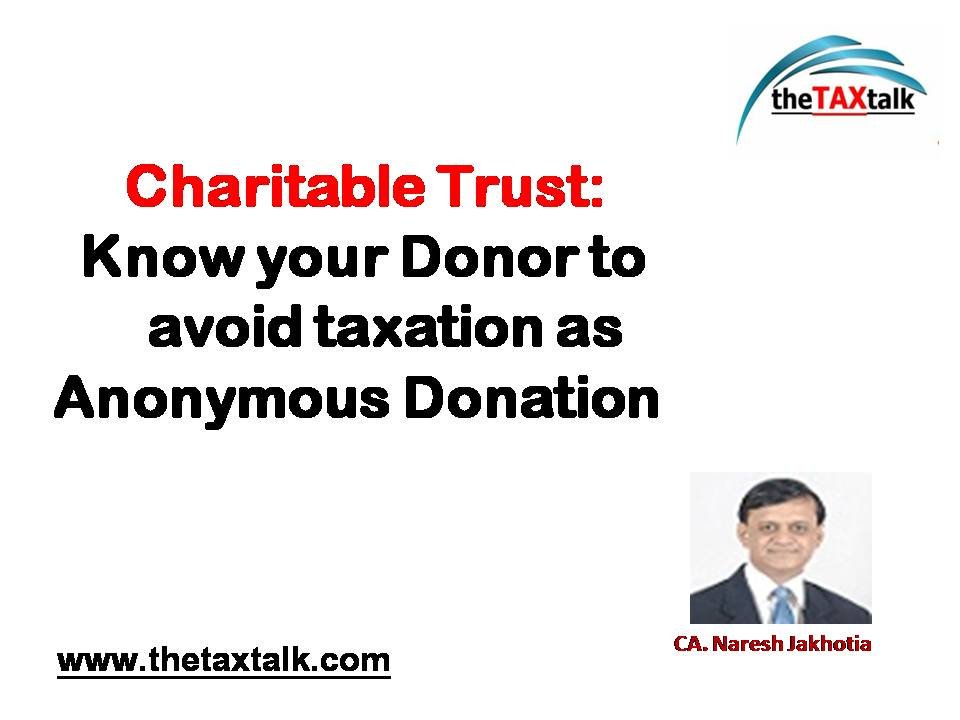 The flow of unaccounted income or black money is regulated at multiple levels in the income tax law. The law for taxation of unexplained income and unexplained expenditure is already there in the Income tax Act-1961. Often, charitable institutions accept donations without maintaining a record of the names and addresses of the donors.

Even the channelization of unaccounted money to charitable trust for the noble cause is also regulated by providing for its taxation as an “Anonymous Donation” u/s 115BBC of the Income Tax Act-1961.  Let us know more about it:

The expression “anonymous donation” has been defined under section 115BBC(3) as under:

To avoid the rigour of income tax, the charitable trust must maintain the records & document with details of the donor. Alternatively, if the trust is receiving anonymous donations then it must ensure to keep a tab of the limits of RS. 1 Lakh or 5% as discussed above

Amount shall not be taxable as Anonymous Donation in the following cases:

Whether anonymous donations (taxable portion) are subject to
conditions as to application and accumulation?

Sections 68 to 69D provides for taxation of unexplained cash credits, money investment, expenditure etc. All such amounts are liable to be taxation U/s 115BBE @ 78%. There was a controversy as to whether section 68 to 69D can be invoked in the case of trusts which are eligible for deduction/exemption U/s 10(23C) or Section 11. In my view, with section 115BBC, all the controversies have been settled as a special & separate mechanism to deal with such amounts exists in the income tax law. The provisions of Sections 68 and 69 can be invoked only when the trust does not treat a particular receipt as income. However, in the case of charitable trust, if the anonymous donation is already shown as income, it may not be right for the Assessing Officer to invoke the provisions of 68 to 69D of the Income-tax Act. Delhi High Court in DIT (Exemption) v. Keshav Social and Charitable Foundation 278 ITR 152 (Delhi) has held that anonymity of the donors cannot lead to the inference that unaccounted money has been introduced. Section 68 had no application to the facts of the case because the assessee had disclosed the donations as a part of its income. Thus, there was full disclosure of its income and its application by the assessee. One may further note that the Hon’ble Supreme Court has in Laxmipat Singhania v. CIT 72 ITR 291 (SC), Jain Brothers 77 ITR 107 (SC) & various other cases have held that the same income cannot be taxed twice.

Cash Donation to the trust:

To regulate the bogus claim of deduction U/s 80G by way of donation to charitable Trust, it is now provided that the deduction U/s 80G  shall be allowed to the donor only if the donation of an amount exceeding Rs. 2,000/- is done by any mode other than cash.

Cash Receipt by the trust:

Every year, radical changes are being carried out in the provision related to the taxation of charitable trust. Every trust needs to keep themselves updated while doing the noble task of charity so as to avoid the rigour of income tax provision.