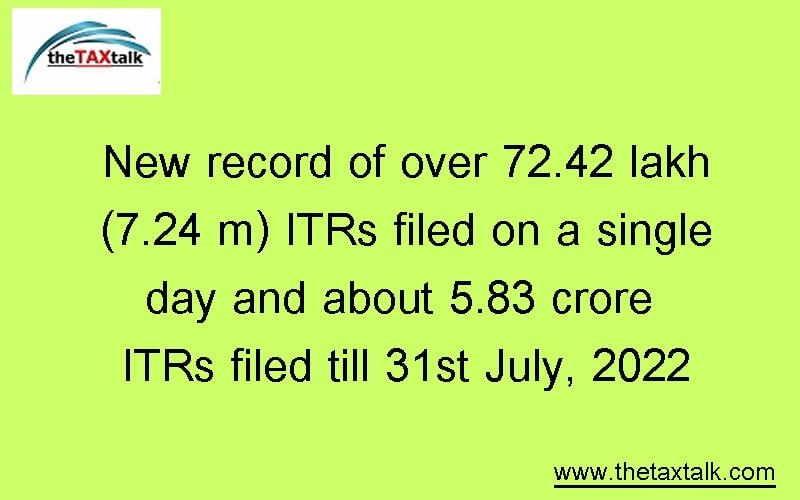 The Department expresses its gratitude to taxpayers and tax professionals for
making compliances in time leading to a surge in filing of Income Tax Returns (ITRs)
resulting in a new record of ITRs filed on a single day.

Large number of taxpayers did their due diligence by comparing data of their
income by viewing their Annual Information Statement (AIS) and Taxpayer
Information Summary (TIS). A high rate of usage of AIS/TIS data was reflected by
the fact that more than 5.03 crore taxpayers viewed/downloaded their AIS.
This year a large portion of the data for ITR-1 was already prefilled with
salary, interest and dividend income making compliance easier for taxpayers. For
other ITRs 2, 3, 4, apart from this data, property details for rental income, brought
forward losses, MAT credit was also pre-filled to further ease compliance for
taxpayers.

The process of e-verification through Aadhaar OTP and other methods is
important for the Department to commence processing of the ITR and to issue
refunds, if any. It is encouraging to note that 3.96 crore returns have been e-verified,
out of which more than 3.71 crore are through Aadhaar based OTP (94%). Of the everified ITRs, more than 3.01 crore ITRs for AY 2022-23 have been processed

(75%).In several instances, taxpayers have been getting their intimation of
processing within a few minutes or hours after filing and verification of ITRs.
Further, the new facility for making tax payment (TIN 2.0) has been launched
on the e-filing portal with two banks- Kotak Mahindra Bank and Federal Bank. Over
73,910 challans have been received through these banks till July 31st,2022 totalling
to Rs. 518.5 crore.

The e-filing Helpdesk team has assisted and resolved over 1.45 lakh queries
this year till 31st July, 2022. Total calls answered in the last week of July, 2022 was
1,05,800 and maximum calls of 18,341 were received on 26th July, 2022. Helpdesk
team also supported resolution of grievances received on the Twitter handle of the
Department by proactively reaching out to the taxpayers/ stakeholders and assisting
them with any issues, almost on a real-time basis.

The Department reiterates its gratitude for the support in timely compliances
and requests all taxpayers to e-verify their ITRs at the earliest. The Department also
urges taxpayers, who for any reason, missed the due date, to complete their filing
immediately.