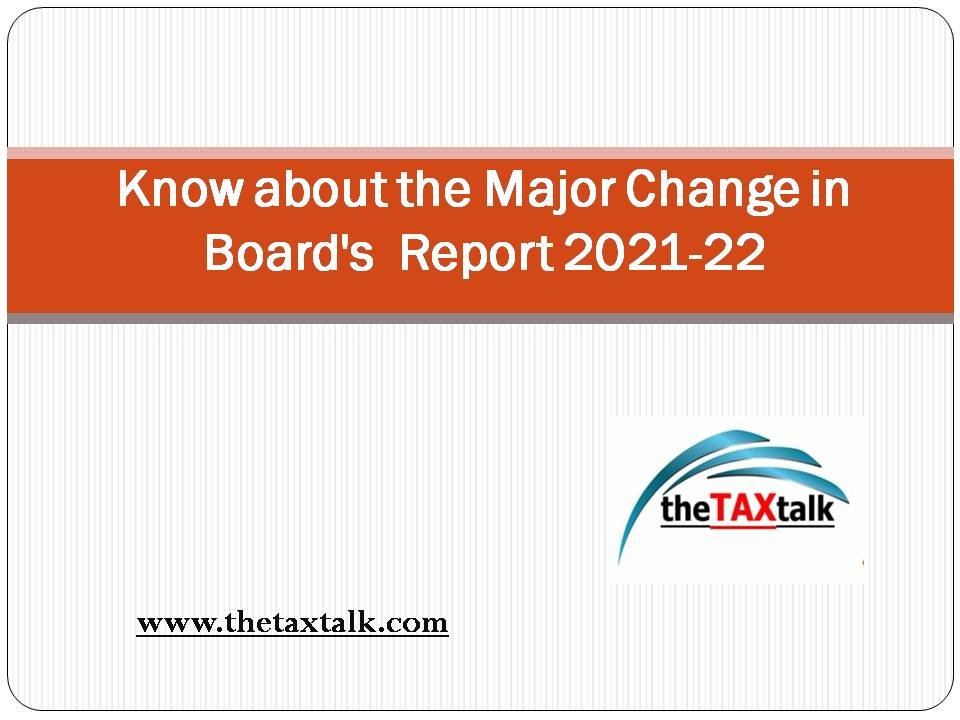 Scope of tax audit report has been widened. The reporting requirements in GST has been increased.

The CARO report has undergone the sea change. Same is the case with Board’s Report which is required to be prepared under subsection 3 of section 134 of the Companies Act, 2013 read with Rule 8 of the Companies (Accounts) Rules, 2014

The two new disclosures requirements over and above the existing disclosures shall be applicable from the current *Financial year 2021-22 and onwards.

The two new disclosures are summarised as under:

Details of applications under the IBC, 2016 during the year along with their status as at the end of the financial year.

The details of the difference between the amount of the *valuation done at the time of one-time settlement and the valuation done while taking a loan from the Banks or Financial institutions along with the reasons thereof.

One can make the following contents for incorporating the same in the Board’s Report as under:-

1. DETAILS OF APPLICATION MADE OR PROCEEDING PENDING UNDER INSOLVENCY AND BANKRUPTCY CODE 2016
During the year under review, there were no applications made or proceeding pending in the name of the company under the Insolvency and Bankruptcy Code, 2016

2. DETAILS OF DIFFERENCE BETWEEN VALUATION AMOUNT ON ONE-TIME SETTLEMENT AND VALUATION WHILE AVAILING LOAN FROM BANKS AND FINANCIAL INSTITUTIONS
During the year under review, there has been no time settlement of loans taken from Banks and Financial institutions