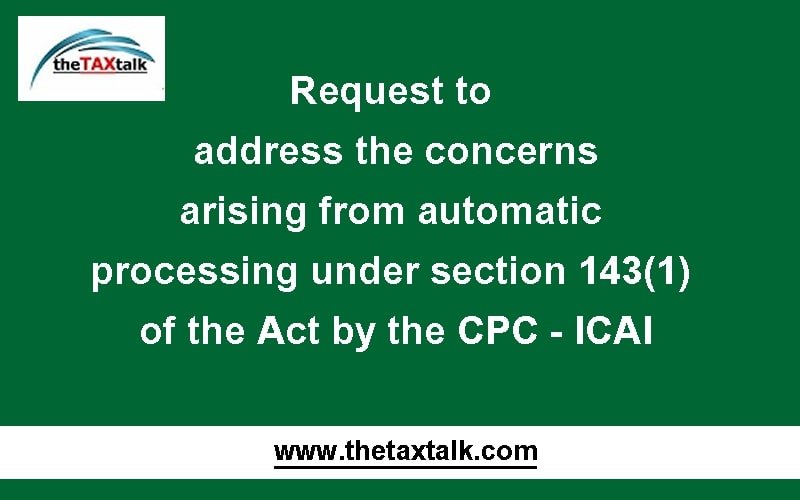 The ICAI, being a partner in Nation Building, plays a pivotal role in strengthening the relationship between the taxpayers and the Department, by bringing to the notice of the Department, genuine hardships being faced by the assessees under the Income-tax law and to ensure timely redressal of the same. Continuing in this direction, we bring before your kind notice issues being faced by tax payers due to processing of return done by CPC u/s 143(1) of the Income-tax Act, 1961 adding income twice as reported in clause 16 of Form 3CD. This is being witnessed in thousands of intimations.

Section 143(1)(a)(iv) provides for automatic processing of return of income by the CPC. Certain assessees, who are required to get their accounts audited, also furnish particulars in Form 3CD.   Adjustments towards disallowance of expenditure or increase in income etc. indicated in the said Form No. 3CD but not taken into account in computing the total income in the return.

Clause 16 of Form 3CD provides for reporting by the tax auditor eg Amounts not credited to the profit and loss account, being, (a) the items falling within the scope of section 28, (d) any other item of income. Addition of the amount reported against this clause is added to the income reported in ITR.

However, assessee as well as our members have reported that tax payers are receiving intimations under section 143(1)(a) from CPC adding income as reported in clause 16(a) and 16(d) of Form No. 3CD. This adjustment is carried out without considering the fact that such income being already offered to tax in the ITR Form furnished by the assessee either under some other head of income or at some other particulars of business income head.

The online responses whose asked are submitted by the assessee against such proposed addition in income u/s 143(1)(a) are also not being considered. The online responses by the assessee are completely disregarded despite clearly explaining the fact that the incomes as reported in clause 16(a) and 16(d) of Form 3CD are taxed/reported in the ITR Form at relevant places meant for reporting such incomes.

Where amount of income is included in Form No. 3CD at clause no 16(a) and 16(d), assessees have by and large, included such amount in income computation and as such included in ITR. For example, in case of a sole proprietary enterprise, savings bank interest or house property rent

received (not being income from business) is credited to profit and loss account and is credited to capital account of the proprietor. While doing computation of income, it is included in taxable income and retorted in ITR furnished by him.

After receipt of intimation under section 143(1), in order to rectify any apparent mistake, application can be made under the provisions of section 154 of the Act. However, no rectification request is being permitted against such addition of incomes.

Therefore, then only solution left to challenge such additions of income from tax payer point of view is to go for appeals involves incurring of considerable cost, precious resources resulting into unnecessary hardships. This is against the policy of ease of doing business. There is error in programming employed by CPC in this regard and such automatic adjustments solely based on reporting under clause 16(a) and 16(d) of Form 3CD, without considering ITR while issuing intimations under section 143(1)(a) should be instantaneously stopped.

Similar, is the case with various other assessees wherein income as reported in clause 16(a) and 16(d) of Form 3CD are being added under section 143(1)(a). In other cases, any item in the nature of income eg Interest income, rental income, agricultural income etc which is credited to the capital account (since non-business income) is reported under clause 16(d) of Form 3CD of the assessee. While filing ITR, these items of income are offered for taxation under the respective heads of income. While processing such ITRs by the CPC, entire such income(s) though offered for taxation is added back & demand being raised. The same is being done without considering the response submitted against the intimation of the proposed adjustment under section 143(1)(a).

This error in programming for processing ITR is resulting into:

(c) costing time, efforts and cost to the Government,

(d) contrary to policy of Hon’ble Prime Minister of Ease of Doing Business,

(e) receding status of the country in ease of doing business ranking.

As is clear from above, automatic additions of income under section 143(1)(a) incomes reported in clause 16(a) and 16(d) of Form 3CD without considering income based on incorrect computation. The online responses submitted against such proposed additions should be considered before raising demand and even rectification application also must be permitted in such cases.

It is suggested that:

(1) The CBDT may look into the matter of automatic additions to income based on reporting under clause 16(a) and 16(d) of Form 3CD without considering the fact that such incomes may have been offered by taxpayers in their ITR Form.

(2) The online responses against such intimations should necessarily be considered.

(3) Application for rectification should be allowed in program and be considered on merit.

(4) Where response or application for rectification has been rejected, all such cases be revisited for doing justice.

We are confident for a positive consideration of our suggestion, above. We shall be happy to elucidate, if need be.

The Institute of Chartered Accountants of India