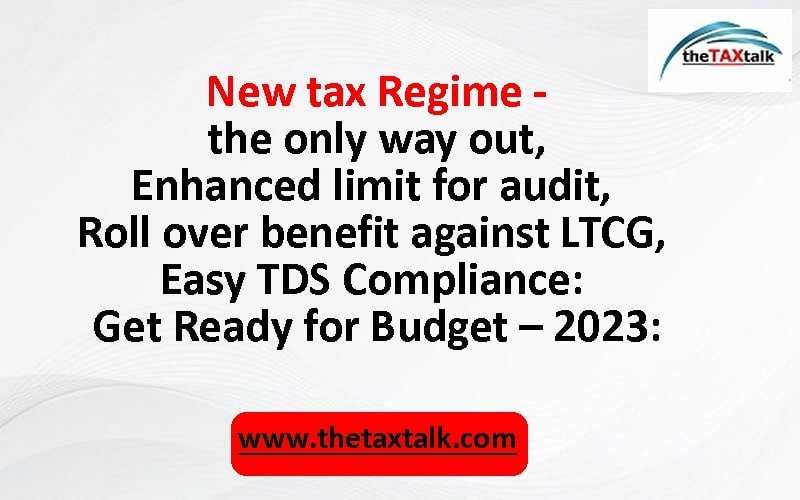 New tax Regime – the only way out, Enhanced limit for audit, Roll over benefit against LTCG, Easy TDS Compliance: Get Ready for Budget – 2023:

Budget 2023 would probably be the most powerful, remarkable & Dream budget of the Modi Government – II. The news suggests that the process of reform has been started and likely to be the issue of regular discussion till Feb 1st 2023.

Though the proposal to introduce the New Direct Tax code has been scrapped, the proposal as was there in the earlier proposed Direct Tax Code will find a place in the Union Budget 2023.

Taxpayers may note that this will be probably the last Budget of the 2nd Tenure of the Modi Government as 2024 will be the election year wherein the Government may be just presenting the Vote on Account and not the full fledged budget. This is the last opportunity for the Modi Government to take the reforms forward on the tax front. In view of this, the Budget 2023 will be the biggest opportunity which the Finance Ministry doesn’t want to miss out on.

One may note that there are instances of fake deduction & exemption which is going to be eliminated by this process of new tax regime. Not all the returns are subject to the scrutiny and verification process and the new tax regime would eliminate the chances of the fake deduction & exemption claim. The biggest beneficiary of the new tax regime as now considered by the Finance Ministry for Budget 2023 would be the salaried taxpayers who have been complaining since the last 2 decades of being subject to higher taxation for being honest and genuine taxpayers.

Another biggest beneficiary of the Budget 2023 will be the middle class taxpayers who have been complaining every now and then of higher tax burden. With this in mind, the surcharge on HNI, Firm and corporate will be continued and is not likely to be changed in the Budget 2023.

Another area of the changes would be tighter penalty and fine provision. The tax evaders are on the radar of the department and the same would continue to be so. The prosecution provision would be widened and the case of prosecution will witness the terrible rise as compared to mere monetary penal provision. This finance ministry has already made its intention clear that it will be acting tough against tax evaders.

One area which must be considered and was missing since last many years is the question of “Accountability” of the tax administrator who are grossly misusing the power resulting in tax terrorism. It may be recalled here that various courts across the country have imposed the fine on the officers for being casual and careless in their approach and working. Further, the undeniable fact is that the Judge of the Hon’ble High court has been recently transferred just because of the fine of Rs. 50 Lakh was imposed for casual approach of the officers.

Though the earlier proposed Direct Tax Code has been scrapped, the Finance Act-2023 is likely to make most of the provision as part of the Income Tax Act-1961 only by following the principle “old is Gold”.

The area where relaxation is not likely to be there will be the provision related to the Tax Deduction at Source (TDS). The rate as well as threshold limit is not going to witness the adverse impact but a new provision of TDS may be introduced. It may be proposed that every transaction would now be subject to either TDS/TCS. The Government is considering the proposal to give one more option to the deductor by relaxing the requirements of quarterly TDS/TCS return filing. The deductor/collector can give the details of the deductee at the time of making monthly tax payment wherein the challan cum return form would be there. The same system is already prevailing for making the payment of TDS on immoveable property. Further, the TDS credit statement is likely to be made operational on a real time basis only. As a result, the TDS credit will be reflected as soon as the deductor / collector pays the challan.

Budget 2023 is likely to be the Dream Budget for the taxpayers. Let us hope more reforms and ease is provided in probably the last budget of the 2nd inning of the Modi Government.