COMPENSATION PAYABLE IN CASE OF DEATH OF A CHILD IN AN ACCIDENT. 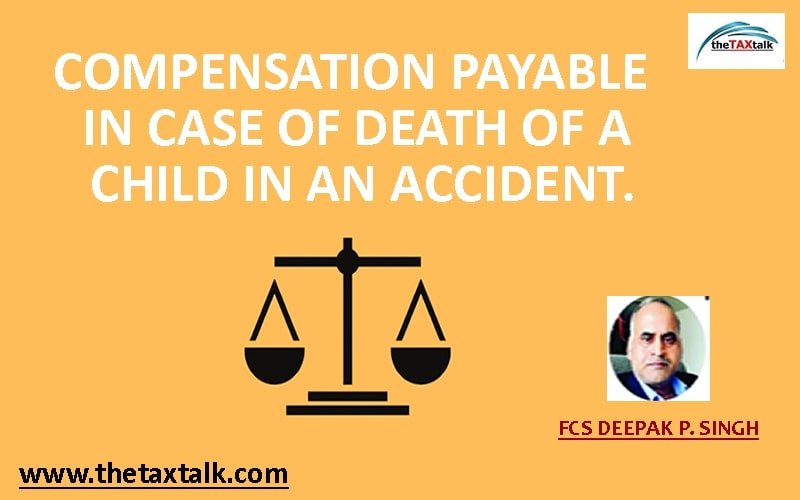 COMPENSATION PAYABLE IN CASE OF DEATH OF A CHILD IN AN ACCIDENT.

As you are aware that “Accident”, the term means an event that is without apparent cause, or is unexpected, an unfortunate event especially one causing physical harm or damage, bought about unintentionally a mishap, hadsa or durghatna. Any person – a child, a young man, a young woman, a blind person, a student, a teacher, a lawyer, an engineer, a baboo, an officer, a pedestrian, a cyclist, a scooterist, a motor car owner/driver/passenger – who puts his feet on the road, faces the risk of becoming a victim of an automobile accident.

The motor vehicles, particularly those driven by reckless drivers, are indeed killers and howsoever careful or cautious one may be on the road, one is likely to fall a prey to accidents caused by motor vehicles. Road accidents, which lead to serious injuries including death or maiming of innocent and ignorant human beings have become a matter of great concern. Due to an alarming development of road transport alien which includes various types of motor vehicles, i.e., buses, trucks, threewheelers, a large number of accidents take place day in day out.

A victim, who was seriously injured and dies for want of immediate medical attention ultimately. The police official on duty and the doctors, who were reluctant to attend to the victim, are to be blamed for his untimely death of the victim. As instead of taking this victim to the nearest hospital immediately, the police wasted much of the valuable time in other formalities. The doctors also declined to give even the first aid.

Every victim is entitled for compensation under the Motor Vehicles Act, 1988 in case of death and grievous hurt. The expression ‘grievous hurt’ is defined in section 320 of the Indian Penal Code, 1860. Section 320 reads:

The following kinds of hurt only are designated as “grievous”:-

Secondly – Permanent privation of the sight of either eye.

Thirdly – Permanent privation of the hearing of either ear.

Fourthly – Privation of any member or joint.

Fifthly – Destruction or permanent impairing of the powers of any member or joint.

Sixthly – Permanent disfiguration of the head or face.

Seventhly – Fracture or dislocation of a bone or both.

Eighthly – Any hurt which endangers life or which causes the sufferer to be during the space of twenty days in severe bodily pain, or unable to follow his ordinary pursuits.

There are certain provisions in the Motor Vehicles Act, under which the victim is entitled for fixed compensation even if the accident takes place due to his own fault or in the absence of any proof or negligence on the part of the driver or the owner of the vehicle.

Hon’ble Andhra Pradesh High Court has issued guidelines for determination of compensation in case of death of a child/infant in an accident;

Liability to pay compensation in certain cases on the principle of no fault.—

(1) Where death or permanent disablement of any person has resulted from an accident arising out of the use of a motor vehicle or motor vehicles, the owner of the vehicle shall, or, as the case may be, the owners of the vehicles shall, jointly and severally, be liable to pay compensation in respect of such death or disablement in accordance with the provisions of this section.

(3) In any claim for compensation under sub-section (1), the claimant shall not be required to plead and establish that the death or permanent disablement in respect of which the claim has been made was due to any wrongful act, neglect or default of the owner or owners of the vehicle or vehicles concerned or of any other person.

The Supreme Court has held that payment of compensation to parents for the death of a child, including a stillborn, in an accident must be just and not be a pittance.

A Bench of Justices D.K. Jain and R.M. Lodha said: “The determination of the just amount of compensation is beset with difficulties, more so when the deceased happens to be an infant/child because the future of a child is full of glorious uncertainties.” In the case of death of an infant, many imponderables had to be taken into account such as life expectancy and his prospects of earning, saving, spending and distributing.

Writing the judgment, Mr. Justice Jain said it was quite possible that there would be no actual pecuniary benefit derived by the parents during the lifetime of the child. But that could not be a ground for rejecting their claim of reasonable expectation of pecuniary benefit if the child had lived.

The Bench said: “The word ‘just’ connotes something which is equitable, fair and reasonable, conforming to rectitude and justice, and not arbitrary. It may be true that Section 168 of the Motor Vehicles Act confers a wide discretion on the Motor Accidents ClaimsTribunal to determine the amount of compensation, but this discretion is also coupled with a duty to see that this exercise is carried out rationally and judiciously by accepted legal standards, and not whimsically and arbitrarily, a concept unknown to public law.”

The Bench, however, cautioned the tribunals, saying the amount of compensation awarded was not expected to be a windfall or bonanza, nor should it be niggardly or a pittance. “Whether there exists a reasonable expectation of pecuniary benefit” was always a mixed question of fact and law, but a mere speculative possibility of benefit was not sufficient.

In the instant case, the National Insurance Company appealed against the Karnataka High Court judgment enhancing the compensation awarded by a tribunal from Rs. 60,000 to Rs. 1.80 lakh for miscarriage suffered by a woman in a motor accident. The tribunal said she was entitled to Rs. 50,000 in compensation for the stillborn and Rs.10,000 for her pain and sufferings. On appeal, the High Court enhanced the amount

The insurance company questioned the correctness of the award for “the loss of the unborn child,” but the consideration before the High Court was over the quantum of compensation and hence it could not raise the same in the Supreme Court, the Bench said, dismissing the appeal.

The single-judge bench of Justice Shivashankar Amarannavar while reflecting on the fact that in the case of this nature, it is difficult to assess the loss in pecuniary term and that the Motor Vehicles Act is also silent in providing any basis to award just compensation, referred to SC precedents and modern jurisdictions world-over in these matters.

Learned Counsel for the appellants-claimants placed reliance on the SC judgment in Kishan Gopal & ANR. Vs. Lala &Ors., 2013 Latest Caselaw 580 SC wherein the Apex Court awarded compensation of Rs.4,50,000/- and another Rs.50,000/- under conventional heads.

He contended that keeping in view the current position of law in the matter one herein, what has been held by the Hon’ble Apex Court has to be followed in the facts and circumstances of the case.

Learned Counsel for the Respondent-Insurance Company submitted that the deceased was aged about 2 years and she is not an earning member of the family and the appellants are not dependants. She further submitted that whatever the compensation awarded by the Tribunal is just and proper.

The Court at the outset noted that it is difficult to assess the compensation in case of a death of minor.

“The age of the deceased is not in dispute. The compensation as well as the future prospects cannot be decided on the basis of gender.”

Commenting on the nature of case and legal proposition around it, the Court said:

“An accident leading to the death of a child causes great shock and agony to the parents and family of the deceased. The greatest agony for a parent is to lose their child during their lifetime. Children are valued for their love, affection, companionship and their role in the family unit.”

The Court also mentioned that previously, the Co-ordinate Bench of High Court has followed the precedent in Kishan Gopal ’ in case of death of a boy who was aged 6 years.

In view of the above, the Court enhanced the compensation granted by Tribunal to the appellants-claimants to Rs.4,50,000/- from Rs.3,50,000/-, towards ‘loss of dependency’ and Rs.50,000/- towards loss of love and affection, funeral expenses and transportation of a dead body and the total compensation comes to Rs.5,00,000/-

The Tribubnal order thus stand modified by additional compensation of Rs.1,50,000/- with interest at 6% p.a. from the date of petition till realization of the award amount.

DISCLAIMER: the article presented here is only for sharing information with readers. the views are personal. In case of necessity do consult with professionals.