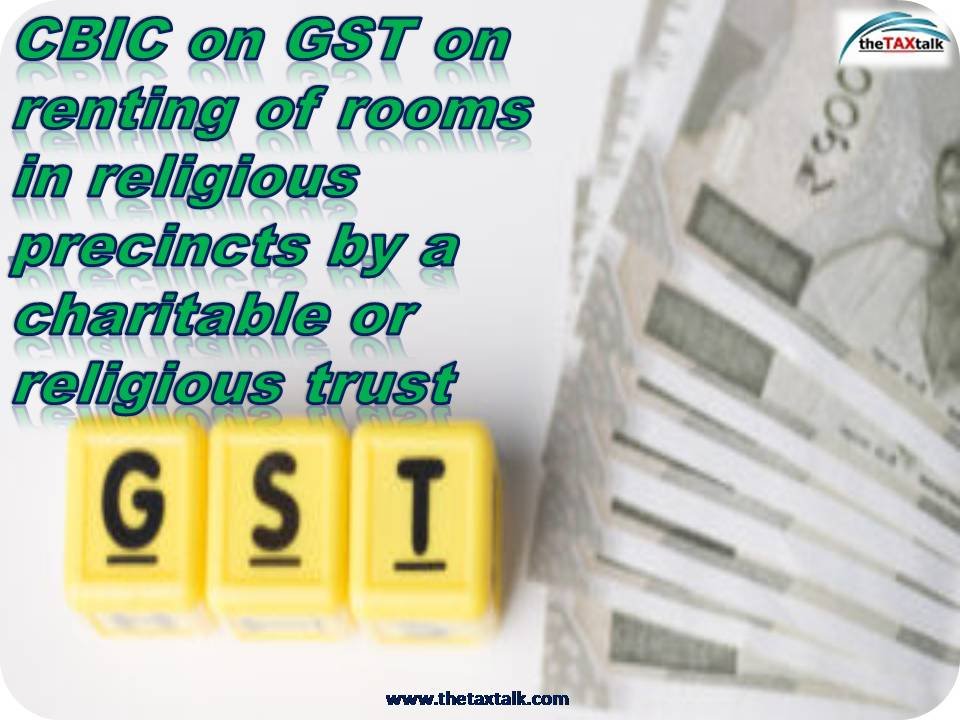 This is a tweets of CBIC regarding GST on  Religious Sarai’s.

Certain sections of the media and social media are spreading the message that GST has recently been imposed with effect from 18 July, 2022 even on ‘Sarais’ run by religious/charitable trusts. This is not true.

The correct position is detailed below:

Based on the recommendations of the 47th @GST_Council meeting, GST exemption on hotel rooms having room rent upto Rs. 1000 per day has been withdrawn. They are now taxed at 12%.

However, there is another exemption which exempts renting of rooms in religious precincts by a charitable or religious trust, where amount charged for the room is less than Rs. 1000/- per day. This exemption continues to be in force without any change.

It has been stated that the three Sarais managed by SGPC in Amritsar have started paying GST with effect from 18.7.2022. These three Sarais are:

In this regard it is to clarify that no notice has been issued to any of these Sarais. These Sarais may have on their own opted to pay GST.

This view has been consistently taken by the Centre even in the pre-GST regime. State Tax authorities may also take the same view in their jurisdiction.

These Sarais managed by SGPC may therefore avail the above stated exemptions in respect of renting of rooms by them.

Circular No 179/2022: Clarification regarding GST rates & classification (goods) based on the recommendations of the GST Council in its 47th meeting

Circular No 178/2022: GST applicability on liquidated damages, compensation and penalty arising out of breach of contract or other provisions of law

SC order on Trans 1 Credit: The GSTN Portal to be kept open for filling Form TRAN-1 & TRAN-2 for two months

GST: Tour Operator Services provided to a foreign tourist for the tour performed in India is proportionately taxable

GST on Hospital Room Rent: The Controversy and the Litigation on the anvil on Exemption to Room Rent exceeding 5,000/- per day for ICU

Applicability of GST on pre-packaged and labeled items

GSTR-1 may not be required to be filed after E-invoicing made mandatory for all the taxable persons.

E-invoicing to be made mandatory for person with Turnover of Rs. 5cr from January, 2023

No GST on Sale of plots: Amenities are a natural part of sale of plot of land and these do not in any way change nature of land or of transaction or activity being that sale of land.