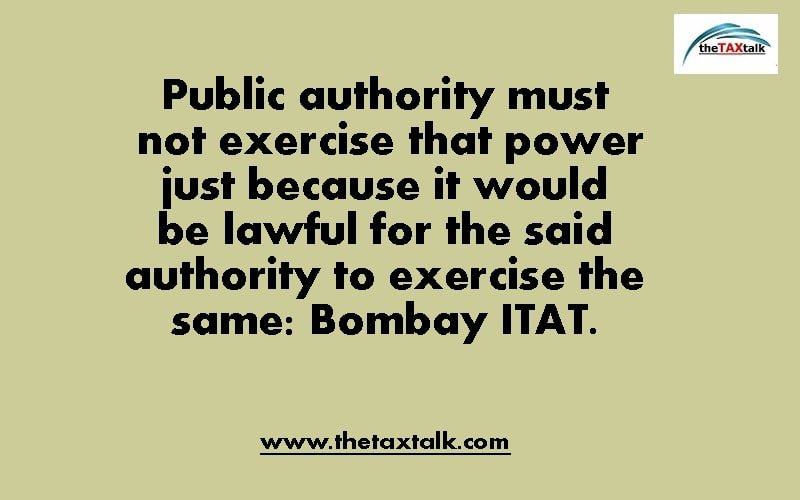 Here is a landmark order by the Bombay ITAT as under:

The ITAT has held that no penalty u/s 43 of BMA for non-disclosure of foreign assets in ITR, if source of investment is well explained and/or assessee’s conduct is bona fide.

Bombay ITAT has observed as under:

No penalty u/s 43 of BM Act can be imposed for non-disclosure of foreign asset (foreign bank account) in ITR, where—

(i)   The same was not assessee’s unexplained investment as, though held in her name, they represented her deceased mother’s tax paid monies held by assessee in fiduciary capacity and hence it was not ‘undisclosed foreign asset’ as defined in section 2(11) of the BM Act;

(ii)   The assessee’s bona fide conduct in not using any of that money for herself as she was a fiduciary and had donated it to a reputed global charity as per the wishes of her deceased mother. Even before the bank account was detected by the revenue authorities, the entire balance in the said account, as per instruction of the assessee’s late mother, has been donated to a bona fide charity of the global repute. In these circumstances, the plea that such a lapse of non-disclosure, even if that be so, is only an inadvertent mistake, and that conscious non-disclosure or any mens rea in the non-disclosure is completely contrary to human probabilities, does merit acceptance. No reasonable person would consciously or deliberately withhold disclosure about this foreign bank account, for an ulterior motive, from the tax authorities, and, in any case, admittedly the money does not belong to the assessee as is the position accepted by the Assessing Officer himself. Viewed thus, on merits of assessee’s conduct, it was not a fit case for the imposition of impugned penalty;

(iv)   Revenue had assessed the undisclosed foreign asset at nil in her hands; and

(v)   Clearly, there was no mala fide motive in non-disclosure in ITR as the balance in the account was very small compared to the tax paid by the assessee and her company in 1000s of crores of rupees. So, non-disclosure in return filed u/s. 139 is only a lapse.

Penalty could not have been imposed by AO u/s. 43 of BM Act for any of the above reasons even on a standalone basis. Department’s stand is that de hors the non-taxability of the amount in the hands of the assessee and de hors the bona fide conduct of the assessee, as long as the assessee is a signatory of the undisclosed foreign bank account, and the legal owner as such, the penalty under section 43 of the BMA must be imposed. This stand of department cannot be accepted.

Essentially, therefore, the overall conduct of the assessee, and materiality of the lapse as also its being in the nature of a technical or venial breach of law, is the most critical factor so far as taking a call on the question of whether or not a penalty should be imposed for the assessee’s failure to discharge a statutory obligation. The imposition of penalty under section 43 is surely at the discretion of the Assessing Officer, but the manner in which this discretion is to be exercised has to meet the well-settled tests of judicious conduct by even quasi-judicial authorities.

Undoubtedly, the Assessing Officer has discretion in the matter, and that is what, as we have noted earlier as well, the use of the expression “may” in Section 43 suggests. When the exercise of a statutory power is not warranted or justified on a well-considered appreciation of the facts of the case on which a reasonable conclusion would be that the lapse is bona fide and devoid of any ulterior motives, a public authority must not exercise that power just because it would be lawful for the said authority to exercise the same.

That’s why human discretion is involved in the exercise of such powers, and this discretion is to be exercised having regard to the facts of each case in a fair, objective and judicious manner and without losing sight of the bigger picture about the related state of affairs and the scheme of relevant legislation. Unless there are sufficient prima facie reasons to at least doubt bona fides well demonstrated by the assessee, an assessee cannot be visited with penal consequences.

The bona fides actions of the taxpayers must, therefore, be excluded from the application of provisions of such stringent legislation as the BMA.

Tags: bonafidemay in section 43Section 43the word may