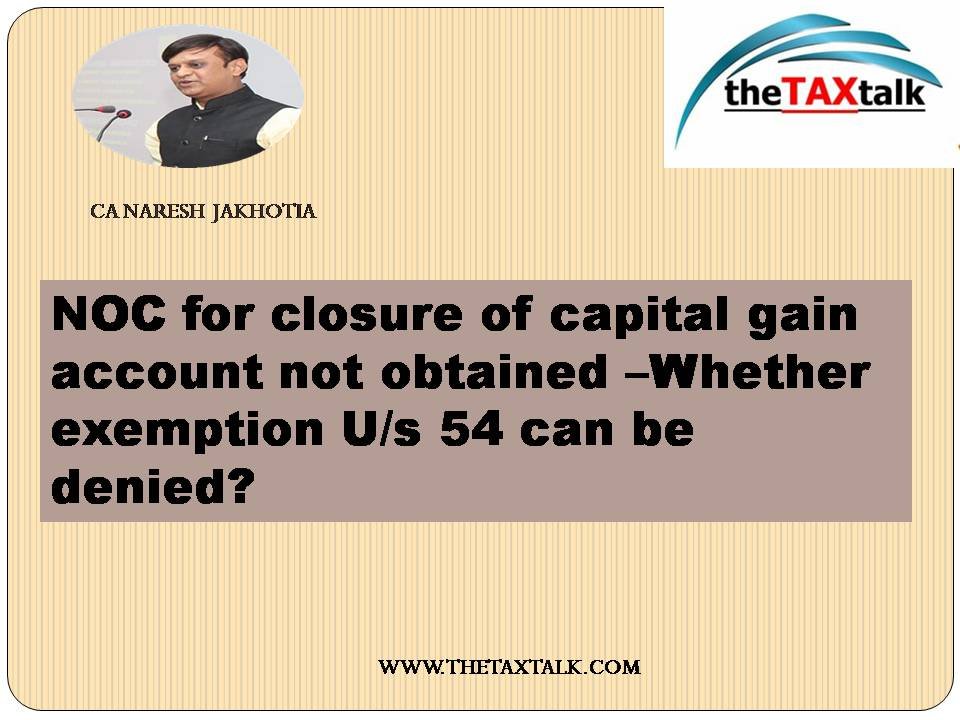 Whether exemption U/s 54 can be denied  if NOC for closure of capital gain account is not obtained by the taxpayers? This was the issue before ITAT Delhi in the case of Ramesh Chander Nijhawan (ITA/8488/DEL/2019).

In this case, the assessee has derived income from house property, capital gains, and income from other sources.

The Assessee has invested the sale proceeds for purchase of a bond as well as house property in order to claim an exemption U/s 54EC & 54F.

Learned AO disallowed the deduction under section 54F on the grounds that the capital gain account has been closed without the approval of the Assessing Officer.

It may be noted that there is a Form G [Application for closing the account by the depositor] in the  Capital Gains Accounts Scheme, 1988 which is necessary for the closure of the capital gain account. This Form G is addressed to the Bank Manager and is required to be signed by the taxpayers and needs to be approved by the Assessing officer . Without the approval of the Assessing Officer, the bank manager or any of the bank authorities cannot close the account. However, due to ignorance or oversight various bank authorities close the account without the capital gain account. Even without obtaining the Form G also the bank often closes the account. In all such cases, the bank authorities may also face the music of income tax officers for default in the compliances.  [Form G is enclosed herewith for the benefits of the readers].  Readers may further note that Form C is required to be submitted for withdrawal from an account for the first time and Form D is required for each subsequent withdrawal wherein the details of the manner of utilisation of money withdrawn earlier is required to be given. It may be noted that any amount withdrawn is required to be utilised for specified investment within 60 days of withdrawal and any unutilised amount may be re-deposited to Type A account immediately.

In the above case, since the Assessee has failed to satisfy the mandatory requirement of closing the account with due approval of the AO, the Income Tax Officer denied the capital gain exemption to the taxpayer. ITO opined that the schema of capital gain scheme has been violated. AO noted that since the closure is done without prescribed procedure, the assessee is not eligible for exemption.

ITAT Delhi with the given facts and figures of the case and after visiting the provision of law held as under:

Capital gains exemption U/S 54 allowed even though NOC was not obtained for closure of capital gains account: