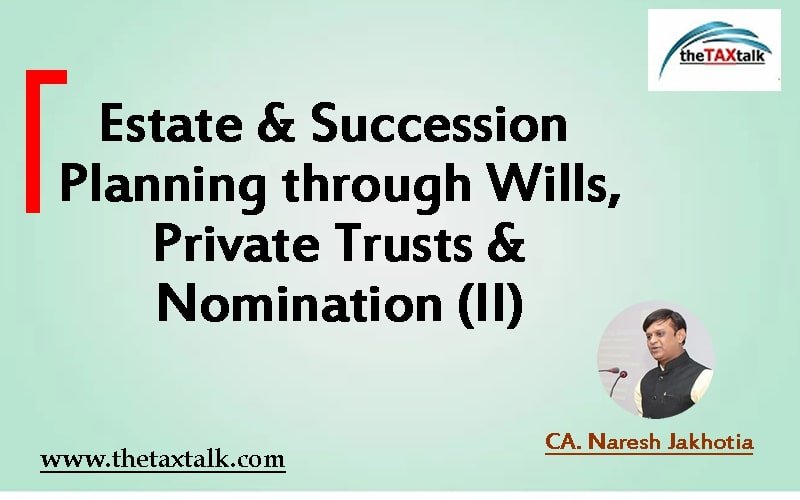 Life is uncertain and ensuring proper estate and succession planning would mean that an already mourning family has one less problem to face for inheritance. In the last issue of The Tax Talk, We have discussed the pattern of Inheritance in case a person dies intestate i.e., without making a will. The unplanned succession process is time consuming & complex and may not ensure the distribution of assets by choice & in an equitable manner. There are numerous instances where lack of succession planning has resulted in irreparably damage to the glory and reputation of the family. In view of all above, Succession planning is a necessity and not an event or an option.

Normally, Nomination, Joint Holding, Will, Private Trust, Family arrangement & settlement, HUF, etc are often considered as a tool of succession after death. However, one needs to understand the intricacies and nuances of all such alternatives.

Nominations & Joint holding options are considered as a succession planning tool by the majority. Various investments like mutual funds, FDs, shares, savings / Current Bank accounts, insurance products, etc have facility of Joint Holder or Nomination. Since it is most commonly used as a tool of succession planning, it needs detailed elaboration:

It is advisable to add the nominee name in the financial product wherever permissible. If an investor has forgotten to add the nominee details in the bank accounts or investments then it can be done at a later stage by submitting the nomination form. Further, the name can be altered or removed thereafter at any point of time through a nomination change or alteration request. It’s not necessary to keep the same nominee in all the investments. One can choose different nominees for different assets.

Adding a nominee in the investments is the mode of ensuring smooth transfer of funds. The nomination facility ensures that the amount is transferred to the nominee without any hassle after the death of its original owner. However, the nomination alone may not be complete for desired succession. There are various myths & misconceptions about nomination as a tool of succession as under:

Similar to nomination, joint ownership never creates a legal ownership over the asset of the deceased. The ownership is determined solely on the basis of the will (in cases of testamentary succession) or by the intestate law (e.g., the Hindu Succession Act, 1956 in case of Hindus dying intestate or through Indian Succession Act for Parsi, Jew etc dying intestate).

Conclusion:
Though the nomination or joint ownership ensures that the fund is transferred from deceased to the other living person, the legal rights may be an issue in such a case. Nomination or Joint holding may be required to be followed by further process of distribution according to succession law or will. The better mode of ensuring succession planning could be by way of will or Private Trust. We will discuss it in the Next issue of The Tax Talk.