Pendency of proceedings before DRT, SARFAESI or other forum is not a bar for initiating CIRP under IBC, 2016. 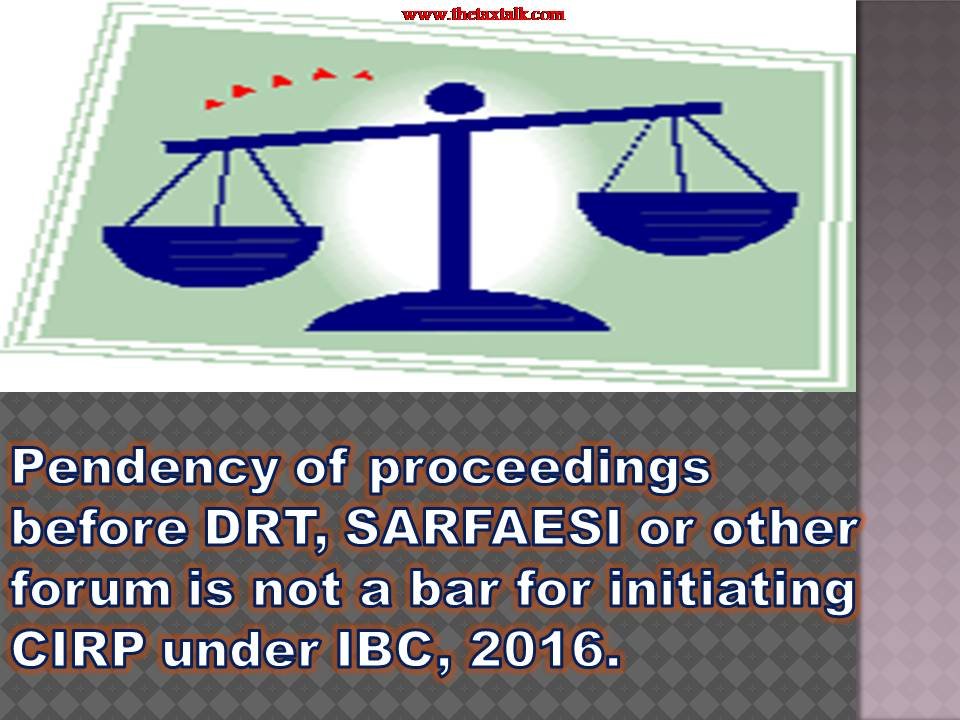 Pendency of proceedings before DRT, SARFAESI or other forum is not a bar for initiating CIRP under IBC, 2016.

Here is a copy of the landmark order by NCLAT wherein it is held that Pendency of proceedings before DRT, SARFAESI or other forum is not a bar for initiating CIRP under IBC, 2016.

NCLAT, Chennai judgement in Company Appeal (AT) (CH) (Ins) No. 130 of 2022 has held that Pendency of proceedings before DRT, SARFAESI or other forum is not a bar for initiating CIRP under IBC, 2016.

NCLAT, Chennai Bench, while adjudicating an appeal in Mr. Amar Vora v City Union Bank Ltd, held that a petition can be moved under Section 7, 9, or 10 of Insolvency and Bankruptcy Code, 2016 (“IBC”), even when proceedings with respect to the same debt are pending before the Debt Recovery Tribunal; or SARFAESI Act 2002; or Prohibition of Benami Property Transaction Act, 1988 or any other forum. IBC has an overriding effect over other laws.

IN THE MATTER OF:

It is the case of the Appellant that the financial Creditor  issued notice under Section 13(2) of the SARFAESI ACT, 2002 for a default of Rs. 14,14,61,066/- for almost 12 accounts and the financial Creditor has also filed an application bearing OA No. 497 of 2019 before the DRT Madurai against the Appellant/Corporate Debtor for recovery of debts Rs. 19,73,47,599/- and filing the application before the Adjudicating Authority for default in loan amount to the tune of Rs. 8,04,86,434/- with interest for the very same loan facility would amount to forum shopping and hence initiation of CIRP by the Adjudicating Authority cannot be maintained. Further, the Ld. Counsel submitted that an application being IA 844 of 2021 filed before the Adjudicating Authority praying the Authority to keep abeyance till the matter in reference no. R-1929 of 2020 before the prohibition of Benami Property Transaction Act, 1988 is decided.

“The provisions of this Code shall have effect, notwithstanding anything inconsistent therewith contained in any other law for the time being in force or any instrument having effect by virtue of any such law.”

Form-1 dated 09.03.2021 filed by the Respondents/financial Creditor at part -IV regarding particulars of financial debt shown as Rs. 5,20,00,000/- and the Appellant has in para 6 of the  counter filed before the Adjudicating Authority admitted that the Appellant obtained three credit facility from the financial Creditor to a tune of Rs. 5,20,00,000/- on various dates by producing the subject property as collateral. In view of the reason the Appellant had admitted the debt and default. The Adjudicating Authority also took the stand that the existence of debt and default had been proved beyond reasonable doubt. Accordingly, the point is answered against the Appellant.

The order passed by the Adjudicating Authority in admitting the application filed by the 1st Respondent against the Corporate Debtor is a well reasoned order and we do not find any legal or factual infirmity in the order and no interference is called for.