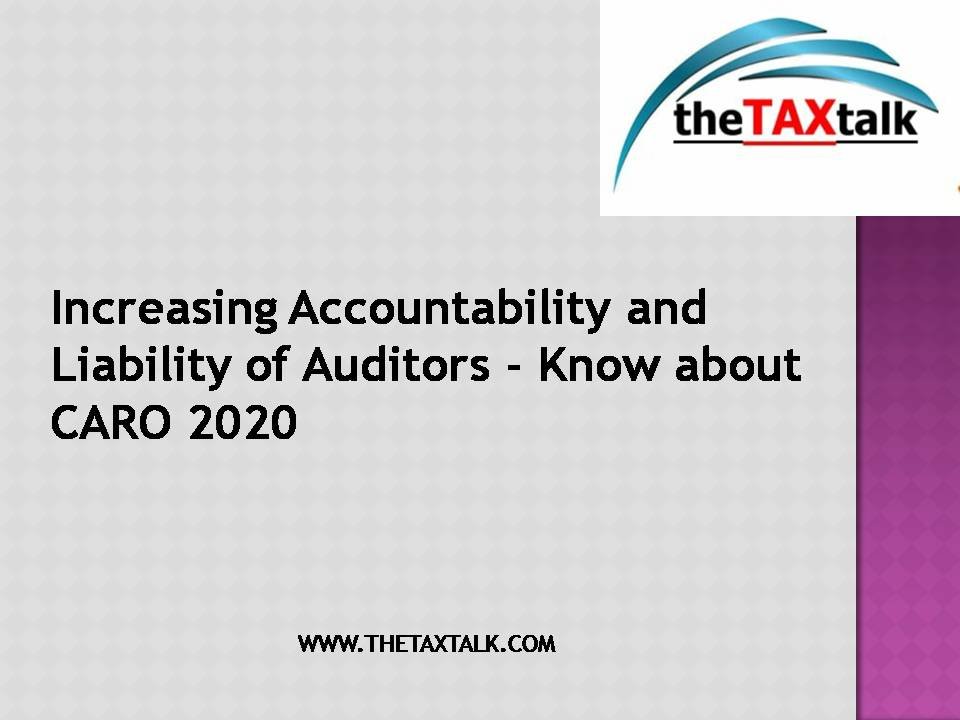 The CARO 2020 has increased the responsibility of the auditor all the more.

Now, new clause 3(xviii) is incorporated in CARO 2020 which says that if there is a resignation of statutory auditors during the year under audit, incoming auditors must consider the issues, objections, or any concerns raised by the previous auditors.

One may note that the ICAI Code of conduct already provides that the incoming auditors must communicate with the previous auditors to understand the issues and reasons for their resignation.

However, now it is further expected that the previous auditors clearly state the reasons for their resignation instead of mentioning ambiguous reasons such as other preoccupation, personal reasons, administrative reasons, health reasons, mutual consent, and unavoidable reasons.

As a result, the new auditor before accepting an audit, communicates with the previous auditor not just for a formality but to discuss the issues and circumstances. At the same time, the resigning auditor must also clearly mention in the resignation letter the reason like low fee, limitation on scope, etc.

Another tough compliance in the new CARO 2020 is with regard to data submitted to the bank vsi a vis financial statements. One may refer Para 3(ii)(b) of CARO, 2020 which now required auditor to report as to whether the quarterly returns or statements filed by the company with such banks or financial institutions are in agreement with the books of account of the Company, if not, give details;

In order to ensure the compliance with this, now the auditor should carry out the following procedures:

1. Verify from sanction letters and loan agreements whether the company has been sanctioned working capital limits in excess of five crore rupees, in aggregate from banks or financial institutions on the basis of security of current assets.

4. Don’t forget to compare & analyse the quarterly statements submitted to lender banks/FIs with books of account of the company.

Even if monthly submission is there, CARO requires the reporting of quarterly data.

In case of disagreement, report the details thereof

In addition to above, the auditor must note the following before preparing and presenting the Financial Statements for the FY 2021-2022 under Schedule II:

There is no formula prescribed under Schedule III for computation of ratios. The formulas as mentioned in Guidance Note are also only suggestive in nature. Hence, a greater degree of subjectivity may be there in computing the ratios;

Under Ind AS Schedule III, Capital Advances are not to be classified under Capital Work in Progress, since they are specifically to be disclosed under other non-current assets.

Now, the Loans and Advances in nature of loan given to directors, KMPs are required to be disclosed in notes to accounts on one hand but on the other hand, the same also needs to be evaluated for compliance of Section 185 of the Companies Act, 2013 as well as AS 18 requirements.

The details should not be included for those companies whose names were struck off during the financial year but an order had been passed for restoring the company’s name before approval of the financial statements;

Auditor has to ensure that the Non- current trade receivables shall be shown under “Other Non Current Assets”. Further, the Deferred Tax Assets/ Liabilities shall only be shown under Non Current heading. Auditors need not write that the depreciation has been provided as per the method prescribed under Schedule II. The items falling under “Additional Regulatory Information” which are not applicable to the company should be disclosed with (say) “Not Applicable”

Further, the title deeds w.r.t. PPE also needs to be evaluated from compliance angle of Section 187 of the Companies Act, 2013.