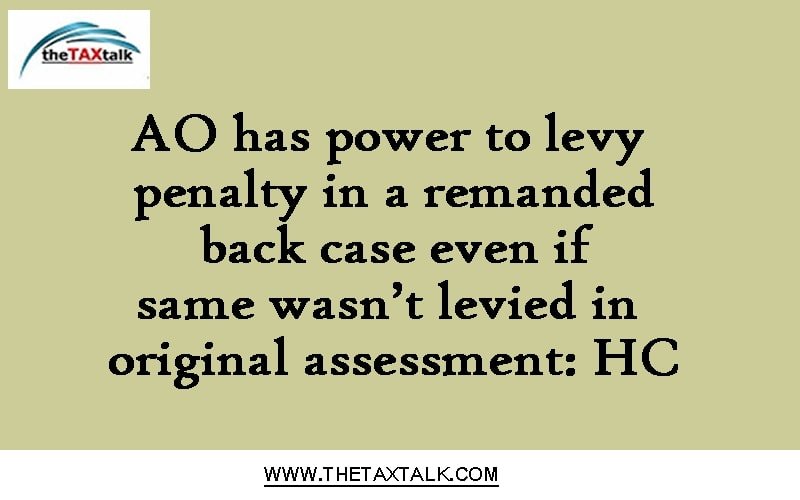 The assessee was carrying on the business of quarrying and sale of rock aggregates. The return of income filed by the assessee was accepted and the assessment was completed under section 143(3).

Later, the Pr. Commissioner of Income-tax (PCIT) initiated revision under section 263. The assessment order passed by the Assessing Officer (AO) was set aside and the matter was remanded back to AO for passing fresh assessment order.

The AO passed fresh assessment order after disallowing excessing depreciation claimed by the assessee. He also issued a show-cause notice proposing the imposition of penalty on the assessee. After considering the reply of the assessee, the penalty order was issued.

Assessee approached the High Court challenging the penalty order passed by the AO. Assessee contended that the subsequent order of assessment issued consequent to the order under section 263 cannot confer the jurisdiction upon the AO to initiate proceedings for imposing penalty.

The Kerala High Court held that there is no quarrel that while issuing orders under section 263, the PCIT cannot direct AO to impose penalty. However, when in the exercise of powers under section 263, an assessment order was set aside and remanded back to the assessing officer, all the powers of an AO get vested by operation of law.

PCIT had set aside the assessment order in its entirety and remanded the case for fresh consideration by the AO. Thus, while issuing the fresh order of assessment, the AO was bestowed with all powers as in an original assessment, including the power to express his satisfaction for initiating penalty proceedings.

Therefore, the initiation of proceedings for imposing penalty and the consequent imposition was within the jurisdiction and authority of the AO. The writ petition was liable to be dismissed.