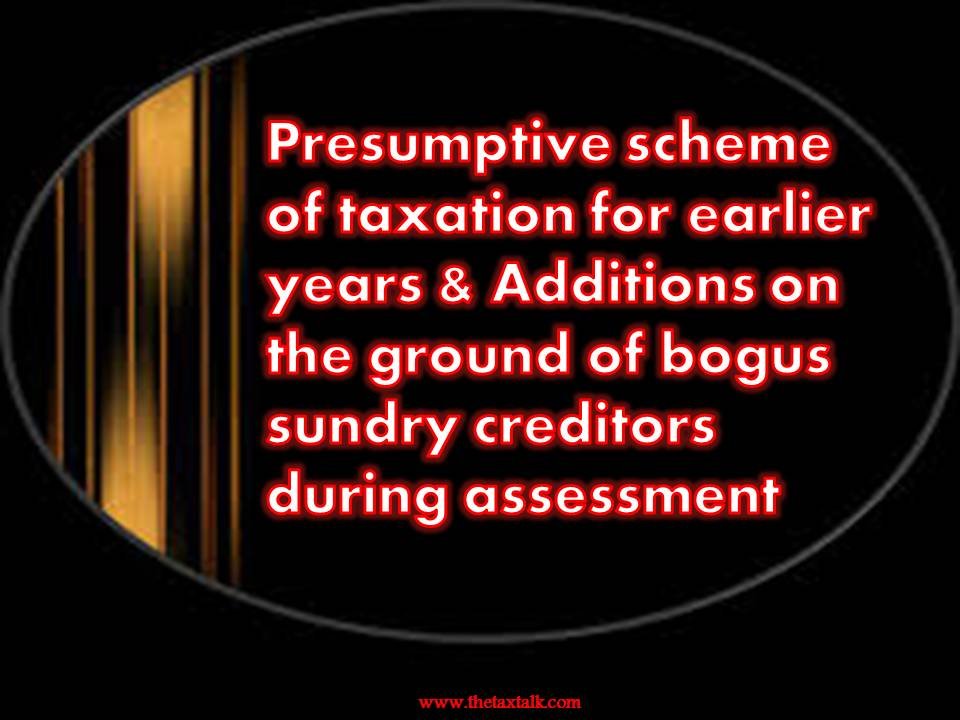 TAT Indore has made various remarkable observations in the case of DCIT CENTRAL-II, INDORE  VERSUS  SHRI RAKESH KUMAR AGRAWAL, MHOW AND (VICE-VERSA). There were various issues involved right from addition u/s 68 to validity of assessment without issue of notice u/s 143(2), from disallowance of expenditure on adhoc basis to the validity of the reassessment proceeding, etc.

The first issue was pertaining to treatment of a certain amount as undisclosed cash credit during assessment proceeding.  It was regarding the unexplained cash deposits made in his various bank accounts during the previous year.

ITAT held as under:

Since, the AO has accepted the turnover as well as Net-Profit shown by the appellant in his return of income, merely on the basis of making of deposits in bank accounts, no addition can be sustained specially in a circumstance when the appellant has fully explained the sources of each and every deposits made in his bank accounts and has also substantiated such sources with the documentary evidences.

We find that by furnishing the various documentary evidences, the appellant has satisfactorily explained each and every cash deposit made by him in his bank accounts, AO could neither find any specific defect or discrepancy in the explanation of the appellant or any of the documentary evidences so furnished by him and also during the course of the survey proceedings carried out in the assessee’s premises, no incriminating material for the year under consideration was found and even the AO has not made reference of any of the materials found during the course of the survey.

Find no infirmity in the finding given by the ld. CIT(A) for deleting the addition made by the AO on account of unexplained cash deposits u/s 68.

On the issue of additional surrendered income not shown by the assessee in ITR, ITAT held as under:

We find that in the instant cases, the ld. AO based upon the material gathered during the course of the survey, has made separate additions and therefore, merely on the basis of the admission of the assessee, without having any other corroborative material on record, no addition could have been made. Accordingly, we find no infirmity in the findings of the CIT(A) in deleting the additions on this count for all the three assessment years.

Another issue was on the validity of reopening of assessment u/s 147. As argued AO was not having/recorded any reason to believe that any income chargeable to tax had escaped assessment – assessee has also challenged the Notice u/s. 148 on the ground that he was not made aware of the purpose of the Notice whether it was for assessment or reassessment or re-computation of the income/loss/depreciation

On this issue, ITAT held as under:

We note that in the case of the assessee, a Survey under s.133A had taken place on 21-09- 2012 and based upon the findings of the survey, a notice under s.148 was duly issued to the assessee after recording the reasons.

AO has clearly mentioned in the body of the assessment order that before issuance of the notice, reasons were duly recorded – no infirmity in the action of the AO in invoking the provisions of s.148 in the instant case. We also find merit in the findings given by CIT(A) that since in the instant case, the assessee did not furnish a valid return, within the time prescribed in the notice u/s 148, there was absolutely no necessity for the ld. AO to issue any notice under s.143(2) of the Act to the assessee.

With this observation, this issue was decided against assessee.

On the issue of addition of excess expenditure over income, ITAT held as under:

Appellant could be able to establish that the sum was received by him out of realization from customers. We also find that by way of furnishing the date wise details of cash withdrawals made by the appellant from his various bank accounts along with the copies of the bank statements, the appellant could said to able to substantiate his claim of meeting the sources of payments noted down in the diaries out of the cash so withdrawn.

Thus, in our considered view, the appellant could be able to explain the sources of entire cash payments found noted in the diaries, for the assessment year under consideration.

AO has made the addition only because the sum of receipts made in such diaries was lesser than the sum of the payments so noted. We find that on the basis of the financial statements for the year under consideration, as furnished by the appellant, there is no case of excess or unexplained payment over the explained sources of receipts –

On the issue of enhancement of income made by the CIT(A), ITAT held as under:

We find that the assessee is in the business of real estate development and in such business, without finding any instance of receipt of any on-money, suppression of sales cannot be estimated.

We note that neither the ld. AO nor the ld. CIT(A) could bring on record any specific instance in which the sales were not found recorded or fully recorded in the books of account of the assessee. We find that in the instant case, the assessee himself while furnishing his returns of income, has declared additional income.

Further issue was with regard to Adhoc disallowance of various expenses claimed by the assessee. On this, ITAT held as under:

Assessee has furnished the copies of the ledger accounts relating to the expenditure.

DR could not find any specific defect or discrepancy in the various documentary evidence furnished by the assessee before us. We also find that the assessee has claimed expenditure in his Profit & Loss Accounts in respect of project development expenses, salary to staff, office rent, power & electricity, bank charges, brokerage & Commission, advertisement etc. as per the details given in the Schedules to the audited Profit & Loss Accounts filed before us – Nature of all the expenses are those which are necessarily required to be incurred by a real estate developer during the course of his business.

Assessee has shown net profit @13.73% for A.Y. 2012-13 and @22.43% for A.Y. 2013-14 and considering the nature of business of the assessee, the same can be said to be quite reasonable. We find that during the Remand Proceedings, the ld. AO could not bring on record any specific expenditure which according to her was not allowable or was not supported by documentary evidence. The ld. AO merely on the guesswork, has made the disallowance which is not permissible in the eyes of the law. Thus, we find no infirmity in the action of the ld. CIT(A) in deleting the entire ad-hoc additions.

The further issue was regarding the treatment of the Bogus sundry creditors and advances against properties shown by the assessee.

We also find merit in the contention of the appellant that since for the earlier years, he had opted for presumptive taxation under section 44D of the Act and therefore, he was not statutorily required to maintain any books of account but, mere non-maintenance of books of account for earlier years cannot, ipso facto, result into non-acceptance of claim of the appellant as regard to existence of the opening balance of creditors. The provisions of section 68, although not invoked properly by the AO without examining any books of account, also require the AO to examine each and every credit entry independently and any ad-hoc lump-sum addition, by taking a certain percentage of the total creditors, is neither warranted nor permissible

The last issue was with regard to assessment order passed u/s 144 of the Act passed by the AO without serving any valid notice under s.143(2).

ITAT held as under:

We find ourselves in agreement with the findings of the ld. CIT(A) that during the course of the assessment proceedings as well as the first appellate proceedings, the assessee was given sufficient opportunity of being heard. We also find that on merits, the assessee has already been given substantial relief in respect of the entire additions made by the ld. AO in his order of assessment for A.Y. 2013-14 and therefore, the ground raised by the assessee has become academic in nature.

Since for the earlier years, assessee had opted for presumptive taxation under section 44D of the Act and therefore, he was not statutorily required to maintain any books of account but, mere non-maintenance of books of account for earlier years cannot, ipso facto, result into non-acceptance of claim of the appellant as regard to existence of the opening balance of creditors.

The provisions of section 68, although not invoked properly by the AO without examining any books of account, also require the AO to examine each and every credit entry independently and any ad-hoc lump-sum addition, by taking a certain percentage of the total creditors, is neither warranted nor permissible.