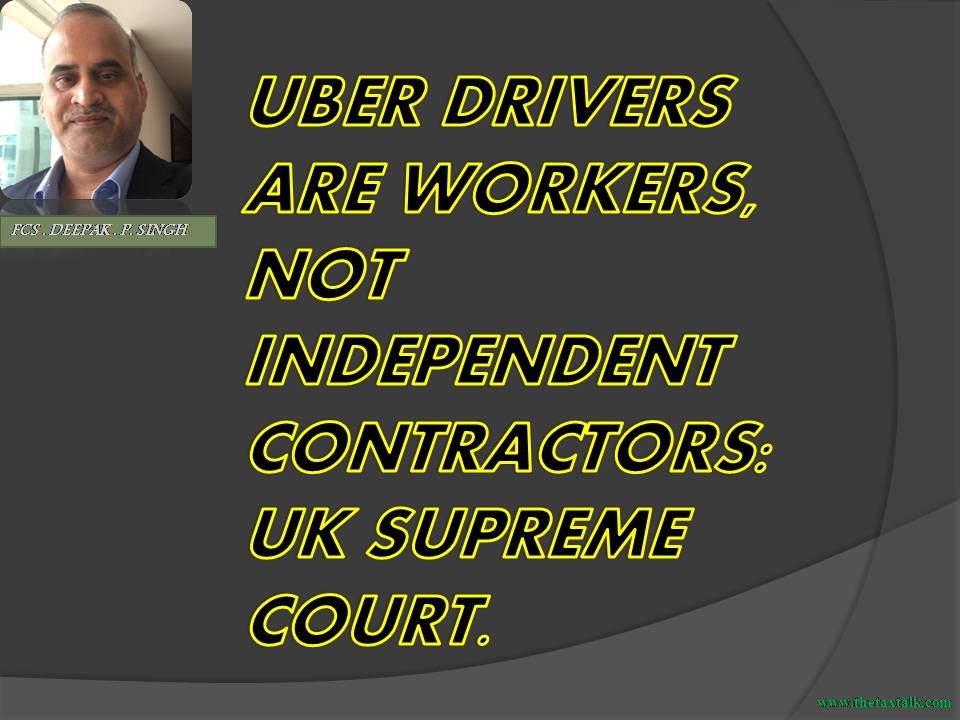 In a judgment that can have implications in several countries, including India, the Supreme Court of the United Kingdom bench held that Uber drivers are ‘workers’ and not independent contractors.

Going by the ruling, the app-based taxi service provider drivers will be entitled to employment benefits like minimum wages, paid holidays, etc.

The unanimous decision by the UK’s Supreme Court in the Uber BV and Others v. Aslam and Others case ended the five-year-old legal battle in favour of the drivers.

The appeal, in this case, concerned the employment status of private hire vehicle drivers who provide their services through the Uber smartphone application Uber app.

The main question raised during the appeal was whether an Uber driver is a ‘worker’ for employment legislation and entitled to receive national minimum wage, annual paid leave and other benefits.

Earlier, the employment tribunal had found that respondents worked under worker’s contracts for Uber London. The Employment Appeal Tribunal and the Court of Appeal by a majority dismissed

After that, Uber preferred an appeal in the Supreme Court.

The main contention of Uber was that when a ride is booked through the Uber app, a contract is thereby made directly between the driver and the passenger whereby the driver agrees to provide transportation services to the passenger. The fare is calculated by the Uber app and paid by the passenger to Uber BV, which deducts part (20% in these cases) and pays the balance to the driver.

Uber characterises this process as collecting payment on behalf of the driver and charging a “service fee” from the driver to use its technology and other services. Uber had also emphasised that drivers were free to work when they wanted and as much or as little as they wanted.

In summary, Uber argued that drivers are independent contractors who work under contracts made with customers and do not work for the company.

The Supreme Court observed that the transportation service performed by drivers and offered to passengers through the Uber app is very tightly defined and controlled by Uber. Drivers are in a position of subordination and dependency in relation to Uber to such an extent that they have little or no ability to improve their economic position through professional or entrepreneurial skills.

In practice, they can only increase their earnings by working longer hours while constantly meeting Uber’s performance measures. “The drivers were rightly found to be workers”, it concluded, dismissing the appeal of Uber.

CONCLUSION: in another case Uber drivers are employees rather than independent contractors and are entitled to greater workers’ rights, a Dutch court ruled. It is the latest court victory for unions fighting for the rights of workers in the gig economy after a similar decision in Britain.

The Amsterdam District Court sided with the Federation of Dutch Trade Unions, which had argued that Uber drivers are in fact employees of a taxi company and should be granted the same pay and benefits as other workers in the sector.

The above decisions of foreign Apex Courts helps Uber Drivers and their unions in India to bargain better services from the company and the company will treat them as its employees and they are eligible to enjoy all benefits available to employees of the UBER.

DISCLAIMER: The content/information presented here  is only for general information of the user and shall not be construed as legal advice. While the author  has exercised reasonable efforts to ensure the veracity of information/content presented ,author  shall be under no liability in any manner whatsoever for incorrect information, if any.