Sum received by Son from mother to giving up rights in properties of deceased father can’t be taxed u/s 45: ITAT 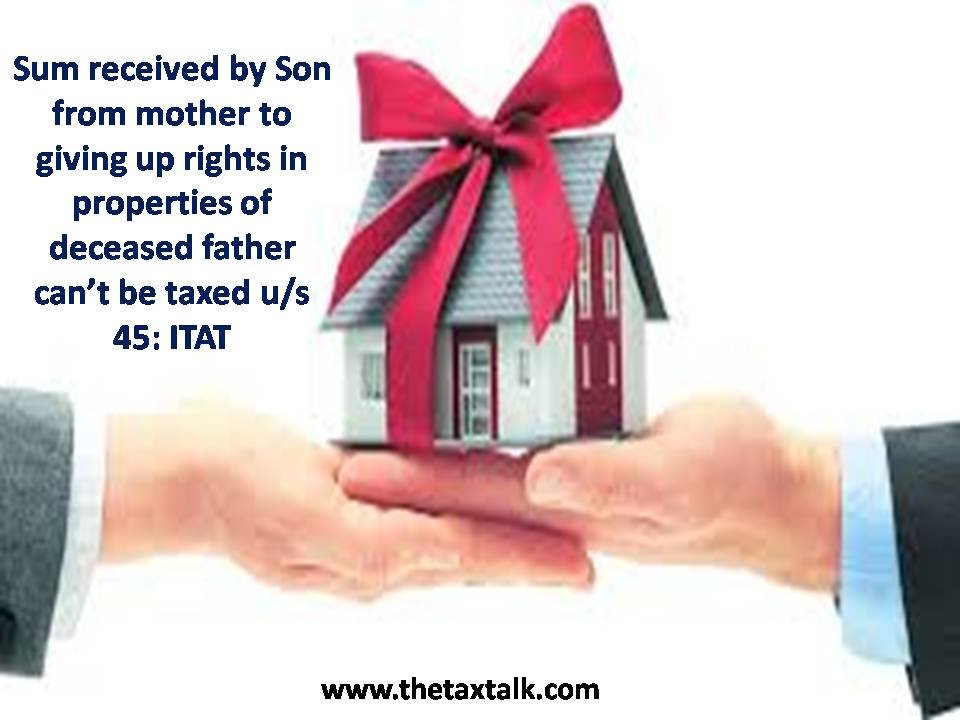 Sum received by Son from mother to giving up rights in properties of deceased father can’t be taxed u/s 45: ITAT

The assessee was the son of K. K. Vijayakumar.

The assessee’s Grandfather had purchased the property through a Registered Sale Deed and by his will, bequeathed the said property to his father.

After the demise of assessee’s father, the assessee filed a suit for partition and separate possession of his share of the properties belonging to his father.

The parties to the suit viz., the assessee, his brother, and his mother signed an agreement, whereby it was agreed that the assessee would be paid a sum of Rs. 1.60 crores and allotted one shop as full and final settlement.

The assessee gave up all his rights to any of the other suit schedule properties. A decree was passed in terms of the comprised agreement between the parties.

During the assessment, the Assessing Officer (AO) held that sum of Rs. 1.60 crores received by the assessee from his mother was in the nature of income chargeable to tax.

On appeal, the Commissioner (Appeals) also uphold the order of AO. Aggrieved-assessee filed the instant appeal before the Tribunal.

The Tribunal held that the assessee received the sum of Rs. 1.60 Crores for giving up his rights over some of the items of the suit properties.

The fact that all the items of suit properties were bequeathed to the assessee’s mother under the will of the father cannot be the basis to hold that the assessee did not have any rights whatsoever.

The assessee had a right to question the validity of the will and had filed the suit for partition and separate possession of his share of the suit properties.

Thus, the sum received by the assessee was capital receipt not chargeable to tax and cannot be brought to tax as capital gain under section 45.