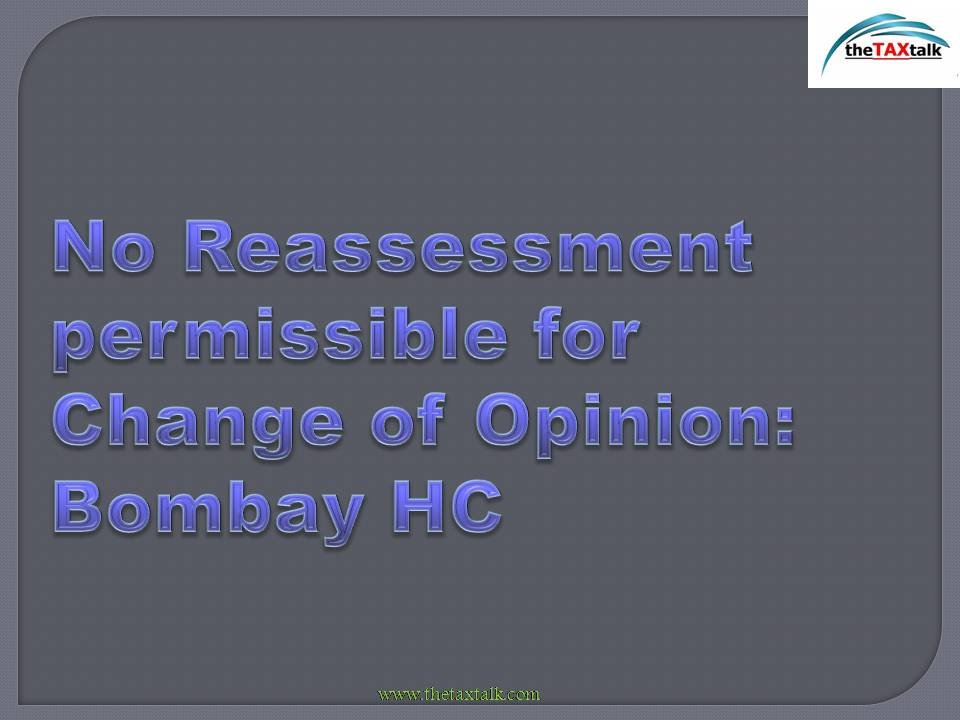 IN THE HIGH COURT OF JUDICATURE AT BOMBAY ORDINARY ORIGINAL CIVIL JURISDICTION WRIT PETITION NO. 804 OF 2022

3] Thereafter, petitioner received the impugned notice dated 30.03.2021. Therefore, reopening of assessment is proposed after expiry of 4 years from the end of relevant assessment year. In view thereof, the proviso to section 147 of  he Act would apply and there is a bar in reopening unless respondents discharge the onus of showing that there has been failure on the part of petitioner to fully and truly disclose material facts during assessment.

4] In the reasons recorded for reopening, there are two issues raised. The first one is that petitioner had issued 625000 shares of Rs.10 each at a premium of Rs.230 per share, i.e., for Rs.240/- and received total share premium of Rs.12,78,25,000 during the year under consideration. According to Assessing Officer, petitioner could have charged premium of only Rs.204.52 against Rs.230 charged and therefore, excess premium of Rs.25.48 per share has been charged. That would amount to Rs.1,59,25,000 which is required to be added to petitioner’s income under section 56(2)(viib) of the Act.

5] The second issue that respondent No.1 has included i.e. Goodwill amount of Rs.26 Crores was not acquired by petitioner but was selfgenerated Goodwill introduced in the books of account before conversion of partnership firm into assessee company. Since the Goodwill was internally generated by erstwhile firm and not acquired or purchased by paying any consideration, the cost of the same should have been shown at ‘Nil’ and internally generated Goodwill should not be recognised as an asset.

6] During the assessment proceedings, petitioner received a notice under section 142(1) calling upon petitioner to provide details of large share premium received during the year, the name, address and PAN of the persons who have applied for shares along with copy of share application and copy of bank statement reflecting such payments, creditworthiness and identity of the investors and genuineness of investment in share capital and details of expenses incurred for increase share capital. By letter dated 17.11.2016, petitioner provided all these details.

7] Thereafter, further details were called for and by a letter dated 08.12.20216 petitioner once again explained about the premium charged as well as the Goodwill. Petitioner provided working of fair value of equity shares as per Rule 11UA of Income Tax Rules, which also shows a figure of a sum of Rs.26 crores towards Goodwill. After considering these details, the assessment order dated 23.12.2016 came to be passed.

8] Ms Omle very strongly opposed the petition. Ms Omle submitted that the Assessing Officer has calculated reasons as to how much premium petitioner could have been charged and has correctly arrived at a figure of Rs.25.48 as excess charged which is required to be added to petitioner’s income. Ms Omle also submitted that if Goodwill could not have been introduced in the books of account because it was selfgenerated Goodwill before conversion of partnership firm into assessee company and the amount of Goodwill has been reduced from the book value of asset in the balance-sheet to arrive at the figure what could have been charged as premium. Ms Omle also submitted that these issues have not been discussed in the assessment order and therefore, could not be stated to have been under consideration during the assessment proceedings.

9] In our view, the reason to reopen is purely on the basis of change of opinion. Indisputably queries have been raised during the assessment proceedings regarding large share premium received during the year, the details of investors and petitioner has provided all details sought for. While providing the workings, petitioner also explained that the Goodwill of Rs.26 Crores has been factored while arriving at the share premium. Even in the assessment order, the Assessing Officer has referred to notice issued under section 143(2) as well as 142(1) of the Act and the Assessing Officer has also confirmed having received all information.

10] As held by this Court time and again and particularly in Aroni Commercials Ltd. Vs. Deputy Commissioner of Income Tax -2 (1) that once a query is raised during the assessment proceedings and the assessee has replied to it, it follows that the query raised was a subject of consideration of the Assessing Officer while completing the assessment. It is not necessary that an assessment order should contain reference and/or discussion to disclose its satisfaction in respect of the query raised.

11] Having considered the reasons and documents annexed to the petition and as no reply has been filed, there can be no doubt in the present facts that very issue of share premium and Goodwill was a subject matter of consideration by the Assessing Officer during the original assessment proceedings. In our view, the reopening of assessment by impugned notice dated 30.03.2021 is merely on the basis of change of opinion of the Assessing Officer from that held earlier during the course of assessment proceedings and this change of opinion does not constitute justification and/or reason to believe that income chargeable to tax has escaped assessment.

12] Since all these details have been disclosed in the documents filed along with return of income including balancesheet and answers to all queries raised have been provided, admittedly it cannot be stated that there was any failure on the part of petitioner to truly and fully disclose any material facts. Statement in the reasons recorded that there was failure to fully and truly disclose material facts, in our view, is only to get over the restrictions provided in proviso to section 147 of the Act.

13] In the facts and circumstances, we allow the petition in terms of prayer clause (a), which reads as under:

“a) That this Hon’ble Court may be pleased to issue under Article 226 of the Constitution of India, an appropriate direction, order or a writ including a writ in the nature of ‘certioraris’ calling for the records of the case and after satisfying itself as the legality thereof quash the notice under section 148 of the Act issued by the Respondent No.1 dated 30.03.2021 being Exhibit-’G’ and the order dated 15.12.2021 being Exhibit-’K’ as bad in law.