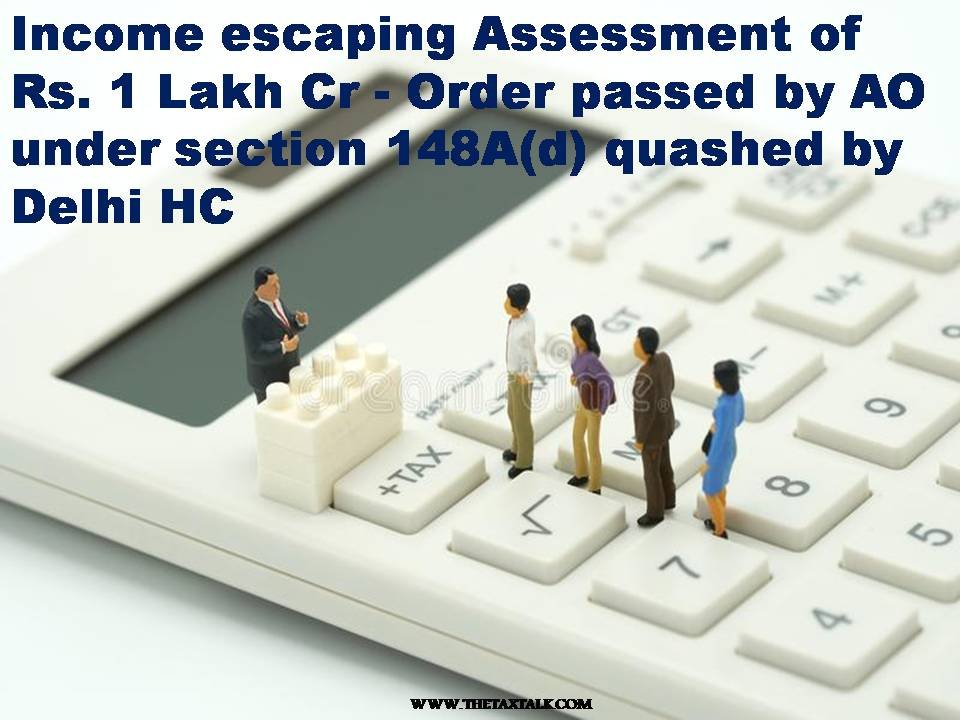 High court holds notice and order being cryptic, in violation of natural justice, mechanical approval by the authority and against the avowed objective of new procedure of reassessment introduced by Finance Act,2021 to reduce litigation.

It is one of the landmark judgments on the new law of reassessment. It is epxected that more such orders will keep on coming in months to come.

Probably the decisions under the earlier law will receive more approvals under the new as well.

IN THE HIGH COURT OF DELHI AT NEW DELHI

Exemption allowed, subject to all just exceptions. Accordingly, the application stands disposed of.

NEW RE-ASSESSMENT SCHEME WAS INTRODUCED BY THE FINANCE ACT, 2021 WITH THE INTENT OF REDUCING LITIGATION AND TO PROMOTE EASE OF DOING BUSINESS.

7.This Court is of the view that the new re-assessment scheme (vide amended Sections 147 to 151 of the Act) was introduced by the Finance Act, 2021 with the intent of reducing litigation and to promote ease of doing business. In fact, the legislature brought in safeguards in the amended re assessment scheme in accordance with the judgment of the Supreme Court in GKN Driveshafts (India) Ltd. v. ITO, (2003) 259 ITR 19 (SC) before any exercise of jurisdiction to initiate re-assessment proceedings under Section 148 of the Act. This Court is further of the view that under the amended provisions, the term “information” in Explanation 1 to Section 148 cannot be lightly resorted to so as to re-open assessment. This information cannot be a ground to give unbridled powers to the Revenue. Whether it is “information to suggest” under amended law or “reason to believe” under erstwhile law the benchmark of “escapement of income chargeable to tax” still remains the primary condition to be satisfied before invoking powers under Section 147 of the Act. Merely because the Revenue-respondent classifies a fact already on record as “information” may vest it with the power to issue a notice of re assessment under Section 148A(b) but would certainly not vest it with the power to issue a re-assessment notice under Section 148 post an order under Section 148A(d).

PETITIONER HAS BEEN DENIED AN EFFECTIVE OPPORTUNITY TO FILE A REPLY AS THE INFORMATION / MATERIAL STATED IN THE IMPUGNED SHOW CAUSE NOTICE HAD NOT BEEN SHARED WITH THE PETITIONER.

PETITIONER WAS NOT GIVEN REASONABLE TIME TO FILE A REPLY.

13.It is pertinent to mention that Section 148A(b) permits the Assessing Officer to suo moto provide up to thirty days period to an assessee to respond to the show cause notice issued under Section 148A(b), which period may in fact be further extended upon an application made by the Assessee in this behalf, and such period given to the assessee is excluded in computing the period of limitation for issuance of notice under Section 148 of the Act in terms of the third proviso to Section 149 of the Act.

THE MANDATE OF SECTION 148A(c) HAS BEEN VIOLATED AS THE IMPUGNED ORDER UNDER SECTION 148A(d) OF THE ACT HAD BEEN PASSED WITHOUT CONSIDERING THE DETAILED REPLY FILED BY THE PETITIONER DATED 31st MARCH, 2022.

15.In fact, this Court in Fena Pvt. Ltd. vs. ACIT Circle 7-1 & Anr. In W.P.(C) 6553/2022 had quashed the order passed under Section 148A(d) of the Act in similar circumstances i.e. where Assessing Officer had not taken into consideration the replies along with the documents/evidences filed by the assessee before passing the order under Section 148A(d).

SIGNIFICANCE OF ISSUANCE OF A SHOW CAUSE NOTICE AT A STAGE PRIOR TO ISSUANCE OF A REASSESSMENT NOTICE UNDER SECTION 148 OF THE ACT HAS BEEN LOST ON THE RESPONDENTS.

is established that the assessee has no proper explanation……” Consequently, this Court is of the opinion that a progressive as well as futuristic scheme of re-assessment whose intent is laudatory has in its implementation not only been rendered nugatory but has also had an unintended opposite result.

Tags: Delhi High Court on 148A