Donations made to eligible institutions eligible for sec. 80G relief even if such sum forms part of CSR exp.: ITAT 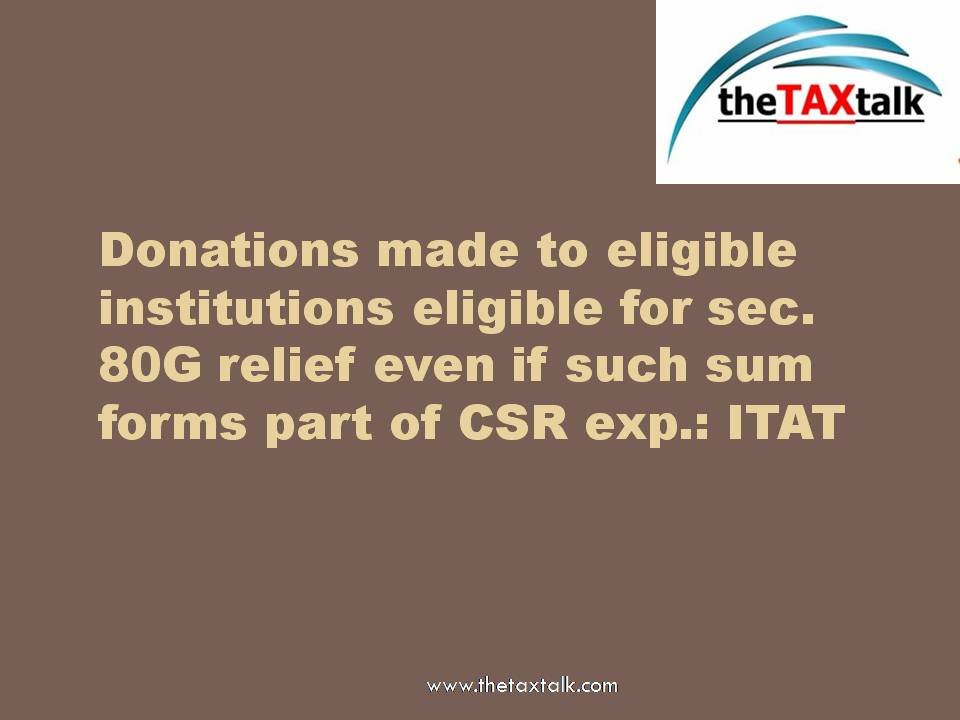 Donations made to eligible institutions eligible for sec. 80G relief even if such sum forms part of CSR exp.: ITAT

Recently, Banglore ITAT has remarked that Assessee could not be denied deduction under section 80G merely because underlying donation forms part of CSR as it would lead to double disallowance. It’s a landmark judgment with far reaching implications.

The ITAT was dealing with the scope of Section 80G, read with section 37(1), of the Income-tax Act, 1961 & its Deductions under Chapter VI-A.

It has made Donations to certain funds & charitable institutions as CSR expenses. The relevant  Assessment year 2016-17 was involved in the case.

The Assessing Officer denied deduction under section 80G on ground that granting deduction to an expenditure which was disallowable under section 37(1) would amount to giving an unintended benefit which was not envisaged under provisions of law.

The issue before ITAT was whether assessee could not be denied benefit of claim under Chapter VI-A, which was considered for computing ‘Total, Taxable Income’, merely because such payment forms part of CSR, as it would lead to double disallowance, which was not intention of Legislature?

The ITAT decided the issue in favour of the assessee by replying it affirmatively in yes.

In short, the Hon’ble ITAT concluded that Assessee could not be denied deduction under section 80G merely because underlying donation forms part of CSR as it would lead to double disallowance

The other issue in this case was regarding the claim of deduction towards additional depreciation. The issue was whether assessee engaged in rendering software development services was not eligible for additional depreciation on computer and software as development activity carried out by assessee could not be considered as a manufacturing activity?

The ITAT analyzed Section 32 of the Income-tax Act, 1961 regarding the claim of Depreciation &  Additional depreciation (Computers) for the Assessment year 2016-17.

It was observed that the Assessee was a 100 per cent subsidiary of Sling Media Inc., USA and provides software development services to its parent company as a captive unit.

Assessee claimed additional depreciation under section 32(1)(iia) on blocks of assets like Computers and Software.

ITAT Bangalore decided that assessee could not be considered as manufacturing activity.