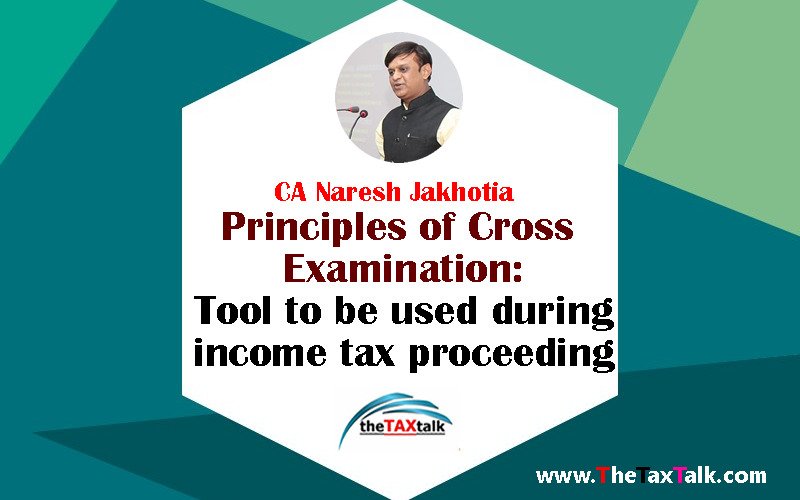 “Not allowing Assessee to cross-examine witnesses by Adjudicating Authority though statements of those witnesses were made as basis of impugned order, amounted in serious flaw which make impugned order nullity as it amounted to violation of principles of natural justice.”

It is a well settled principle of assessment that wherever Revenue collects evidences against the assessee and does not confront the same to the assessee, before using it against the assessee, the addition cannot be sustained. It may be noted that the Rules of evidence do not strictly govern the income-tax proceedings as the proceedings under the Income Tax Act are not judicial proceedings in the sense in which the phrase “judicial proceedings” is ordinarily used. Though the Assessing Officer is not fettered or bound by technical rules of evidence contained in the Indian Evidence Act & he is entitled to act on material which may or may not be accepted as evidence in a court of law. However, the principles of natural justice need to be applied by the income-tax authorities during assessment and appellate proceedings.

There are various instances where income tax assessments which may be sound on facts, figures and merits suffer adverse consequences due to opportunity of cross examination not being provided to the assessees. The issue of cross examination of witnesses in Income Tax proceedings has seen substantial litigation before various appellate forums as well.

It may be recalled that there are numerous cases where the Courts have nullified the assessment orders on the ground that opportunity to cross-examine was not given to the assessee. More particularly, such decisions are widely given now in the cases of penny stock and accommodation entry where after a detailed investigation, racket was busted and sufficient materials were collected by Revenue identifying the modus operandi to bring black money through such transactions in the books/accounts of the assessee without paying due taxes.

It may be noted that there are various judgment by the Supreme Court, High court & the tribunal wherein it is observed that the court/tribunal has the power to direct the authority to pass fresh order after complying with the law or the principles of natural justice and is not required merely to quash the order. In short, the assessment may not be quashed in all the cases but may be remanded back for giving the opportunity of cross examination. In ITO v. M. Pirai Choodi 334 ITR 262, the High Court has set aside the order of assessment on the ground that no opportunity to cross-examine was granted, as sought by the assessee,

It is necessary, therefore, to understand the importance and scope of the principles of cross examination in income tax proceedings. The Supreme Court in the case of Chuharmal v CIT [1988] 172 ITR 250 has observed as under:

“What is meant by saying that the Evidence Act does not apply to proceedings under the Income-tax Act is that the rigor of the rules of evidence contained in the Evidence Act are not applicable, but that does not mean that when the taxing authorities are desirous of invoking the principles of the Act in proceedings before them, they are prevented from doing so.

All that is required is that if they want to use any material collected by them which is adverse to the assessee, then the assessee must be given a chance to make his submissions thereon.

The principles of natural justice are violated if an adverse order is made on an assessee on the basis of the material not brought to his notice.”.

Let us know more about the rights of the cross examination and the principle laid down by the judiciary with plethora of its judgement for the purpose of the Income Tax Proceeding: