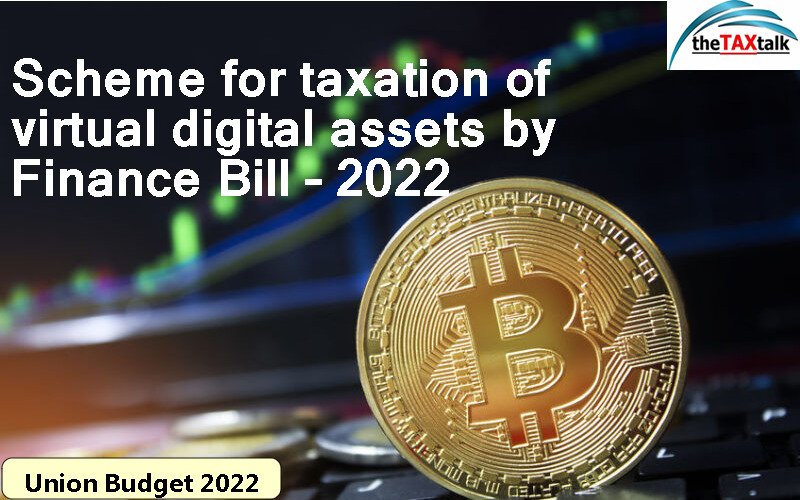 There is a new Scheme for taxation of virtual digital assets by Finance Bill – 2022. Let us know about it:

However, no deduction in respect of any expenditure (other than cost of acquisition) or allowance or set off of any loss shall be allowed to the assessee under any provision of the Act while computing income from transfer of such asset.

Further, no set off of any loss arising from transfer of virtual digital asset shall be allowed against any income computed under any other provision of the Act and such loss shall not be allowed to be carried forward to subsequent assessment years.

3. Further, in order to widen the tax base from the transactions so carried out in relation to these assets, it is proposed to insert section 194S to the Act to provide for deduction of tax on payment for transfer of virtual digital asset to a resident at the rate of one per cent of such sum. However, in case the payment for such transfer is–

(i)  wholly in kind or in exchange of another virtual digital asset where there is no part in cash; or

(ii)  partly in cash and partly in kind but the part in cash is not sufficient to meet the liability of deduction of tax in respect of whole of such transfer,

the person before making the payment shall ensure that the tax has been paid in respect of such consideration.

In case of specified persons, the provisions of section 203A and 206AB will not be applicable. Further, no tax is to be deducted in case the payer is the specified person and the value or the aggregate of such value of consideration to a resident is less than Rs. 50,000 during the financial year. In any other case, the said limit is proposed to be Rs. 10,000 during the financial year.

It is also proposed to provide that if tax has been deducted under section 194S, then no tax is to be collected or deducted in respect of the said transaction under any other provision of Chapter XVII of the Act.

Furthermore, in any sum paid for transfer of virtual digital asset is credited to any account, whether called “Suspense Account” or by any other name, in the books of account of the person liable to pay such sum, such credit of the sum shall be deemed to be the credit of such sum to the account of the payee and the provisions of section 194S shall apply accordingly.

It is proposed to empower the Board to issue guidelines, with the prior approval of the Central Government, to remove any difficulty arising in giving effect to the provisions of the said section and every such guideline issued by the Board shall be laid before each House of Parliament, and shall be binding on the income-tax authorities and on the person responsible for paying the consideration on transfer of such virtual digital assets.

For the purposes of the said section, it is proposed to provide that ‘specified person’ means a person:––

(i)  being an individual or Hindu undivided family whose total sales, gross receipts or turnover from the business carried on by him or profession exercised by him does not exceed one crore rupees in case of business or fifty lakh rupees in case of profession, during the financial year immediately preceding the financial year in which such virtual digital asset is transferred;

(ii) being an individual or Hindu undivided family having income under any head other than the head ‘Profits and gains of business or profession’.

This amendment will take effect from 1st of July, 2022.

4. Further, in order to provide for taxing the gifting of virtual digital assets, it is also proposed to amend Explanation to clause (x) of sub-section (2) of section 56 of the Act to inter-alia, provide that for the purpose of the said clause, the expression “property” shall have the meaning assigned to it in Explanation to clause (vii) and shall include virtual digital asset.

5. To define the term “virtual digital asset”, a new clause (47A) is proposed to be inserted to section 2 of the Act. As per the proposed new clause, a virtual digital asset is proposed to mean any information or code or number or token (not being Indian currency or any foreign currency), generated through cryptographic means or otherwise, by whatever name called, providing a digital representation of value which is exchanged with or without consideration, with the promise or representation of having inherent value, or functions as a store of value or a unit of account and includes its use in any financial transaction or investment, but not limited to, investment schemes and can be transferred, stored or traded electronically. Non fungible token and; any other token of similar nature are included in the definition.

These amendments will take effect from 1st April, 2022.