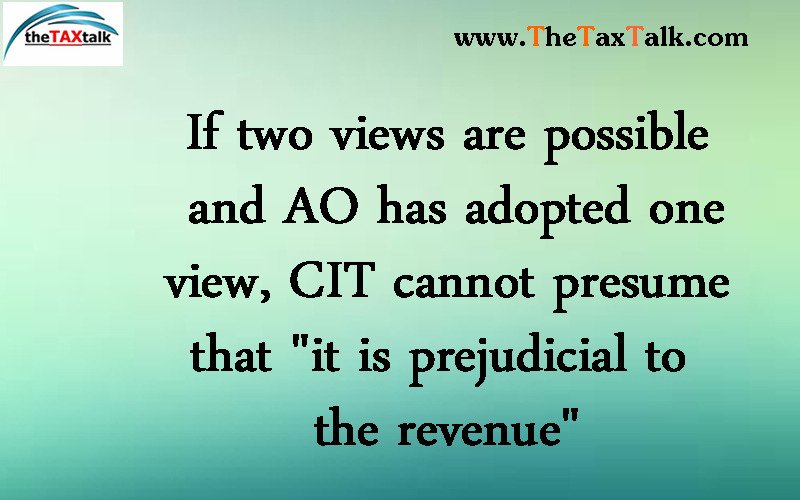 The case pertains to the Re visionary power of the CIT.

The issue inovlved was as to whether the order erroneous or prejudicial to revenue or not?

Assessee had originally filed his return of income admitting income under head ‘House property’ and ‘other sources’ and after claiming deduction u/s 54F,

As a result of exemption, Capital gain income was considered as ‘Nil’

Later, it came to notice of AO that during F.Y. 2008-09, assessee along with 3 others had sold immovable property and Market value of property for stamp duty was more than sale consideration stated in conveyance deed

A notice u/s.148 was issued as there was an escapement of LTCG

Pr. CIT held that assessment order u/s 143(3) rws 147 passed is held to be erroneous and prejudicial to interests of revenue

The court held as under:

Once AO has taken a view on an issue, on which two views are possible, a view which is taken by AO, if Pr. CIT does not agree, it cannot be treated as an erroneous order prejudicial to interests of revenue unless view taken by Income-tax Officer is unsustainable in law

Every loss of revenue as a consequence of an order of Assessing Officer cannot be treated as prejudicial to interests of revenue, for example, when an Income-tax Officer adopted one of courses permissible in law and it has resulted in loss of revenue; or where two views are possible and Income

Tax Officer has taken one view with which Commissioner does not agree, it cannot be treated as an erroneous order prejudicial to interests of revenue unless view taken by Income-tax Officer is unsustainable in law

View which has been taken by AO is one of courses permissible in law, which cannot be brushed aside by Pr. CIT u/s 263

Order of Pr. CIT passed u/s 263 was set aside by the Court & with this the Asessee’s appeal allowed.