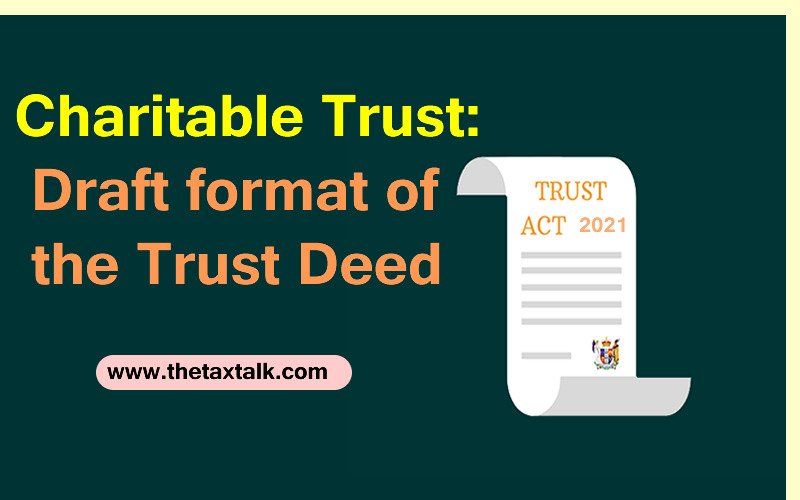 Whether charitable activities should be carried out by society, trust or a Section 8 company is one of the most common question which is asked by the client.

The society and trust requires compliance with the state laws and vary from states to states. Further, the state’s department is not automated and often requires compliances in regional languages which also creates problem for few citizens. As compared to this, MCA is well standardised and procedures are well settled. In view of this, carrying out charitable companies would be much easier and better.

However, often, the trust is formed by the citizens as the advocates or practitioners have easy access to the charity commissioner office and that make formation and compliance easy for the trustees.

__________ called ‘the Settlor’ (which expression shall unless it be repugnant to the context or meaning thereof be deemed to include his heirs, executors or administrator) of the One Part

hereinafter called ‘the Trustees’ (which expression shall unless repugnant to the context or meaning thereof be deemed to include the survivor of them and the Trustees or Trustee for the time being of these presents and the heirs, executors and administrators of the last surviving Trustee their, his or her assigns) of the second Part;

AND WHEREAS the Trustees have agreed to act as the Managing Trustees for the life of the said Trust;

NOW THIS INDENTURE WITNESSETH that to perpetuate the said desire and in consideration of the premises and for other diverse good causes and consideration him thereunto moving he the ‘Settlor’ doth hereby grant, assign transfer and hand over to the Trustees and the Trustees do hereby accept and take possession of the said sum of Rs. ——-/- Rupees ———- only) (hereinafter for brevity’s sake called “the Trust Estate” which expression shall include all accretions thereto by way of donations or otherwise and the investments for the time being representing the same) to HOLD the Trust Estate upon the trusts and with and subject to the powers, provisions, agreements and declarations hereinafter contained of and concerning the same i.e.

1. for relief of the poor

4. the advancement of any other object of general public utility;

5. to collect and receive funds and donations for the above objects,

6. to do all acts, deeds and things as are incidental and conducive to the furtherance of the above objects.

AND IT IS HEREBY DECLARED that the charitable objects hereinabove mentioned shall not be limited or restricted to any particular caste or creed and will not involve any element of profit-making.

AND IT IS HEREBY FURTHER DECLARED THAT THE Trustees shall be entitled to utilise and disburse either the net income of the Trust Estate and/or parts of the corpus thereof for maintaining and/or conducting establishments for the charitable purposes and trusts hereinabove set out;

1. The Trustees shall have power and shall be entitled to collect, recover and receive dividends, rents and profits and other income of the Trust Estate (hereinafter referred to as `as the Trust income`) and to pay there out all taxes, rates, assessments, expenses and outgoings for collection in respect thereof and for the management of the Trust Estate and for administering and carrying out the Trust hereof.

5. The Trusts hereby declared shall be irrevocable.

6. It shall be lawful for the Trustees at any time and from time to time to borrow money as well as to sell, mortgage, assign, transfer, demise or let on lease for any period however long or otherwise dispose of and deal with the Trust Estate including any immovable properties comprised therein or any part thereof either by publication or by private contract and on such terms and conditions as they the Trustees think fit with liberty to the Trustees to buy in rescind or vary any contracts for sale, mortgage, transfer, assignment, lease or other disposition as aforesaid and to resell the same or enter into a fresh contract for transfer, assignment, lease or other dispositions without being answerable for any loss occasioned thereby and with power also to execute all necessary assignments, conveyances, mortgages, transfers, leases, sub-leases and their counter-parts, and other deeds and assurances for the same and to give receipts and discharges for the consideration moneys and all other moneys. All money arising from any such sale, mortgage, transfer or other dispositions shall be deemed to be part of the Trust Estate and shall be dealt with accordingly.

7. The receipt of the Trustees for the purchase money of any property hereby directed or authorised to be sold, or for any other amounts of money, stocks, funds, shares, securities or investments paid, delivered or transferred to them or him under these presents or in the execution of the Trusts or powers hereof shall effectually discharge the person or persons paying, delivering or transferring the same therefrom and/or from being bound to see to the application or being answerable for the loss or misapplication thereof.

8. The Trustees for the time being of these presents shall be respectively chargeable only for such money and securities as they shall respectively actually receive, notwithstanding their signing any receipt for the sake of conformity and shall respectively be answerable and responsible only for their respective acts, receipts, omissions, neglect and defaults and not for those of each other, nor for that of any banker, broker, auctioneer, or another person with whom or into whose hands any trust money or securities shall be deposited or come, nor the insufficiency in title or deficiency in value of any investments nor any other loss, unless the same shall happen through their own wilful default respectively AND ALSO that the Trustees or Trustee for the time being may reimburse themselves, herself or himself or pay and discharge out of the Trust estate all expenses incurred in or about the execution of the Trusts or powers under these presents.

9. The Trustees for the time being of these presents shall have full power to compromise or compound all actions suits and other proceedings and all differences and demands and to adjust, settle and approve all accounts relating to the Trust Estate and to execute, release and to do all other things relating thereto without being answerable or accountable for any loss occasioned thereby.

10. The Trustees shall be entitled to employ any person or persons and pay the remuneration for the effective management and implementation of the Trust, including expert and technical qualified or experienced personnel.

12. Any Trustee may at any time resign by giving a month’s notice to his co-trustees and upon expiry of such period, he shall be deemed to have vacated his office.

14. The Trustees shall determine all questions and matters of doubt in the execution of the Trusts, including the meaning and construction of any of the articles and provisions herein contained and do all acts and execute all the trusts, powers and authorities appertaining to these presents unanimously, and in case of disagreement, by the majority, each Trustee shall have one vote only. The Trustees shall be at liberty to make rules or bye-laws which are not inconsistent with what is herein contained.

15. For the purpose mentioned above or any of them, the Trustees shall be at liberty to enter into, sign, execute and deliver all such contracts, deeds, assurances and writings as they may deem necessary or expedient. The Trustees shall also be entitled in incur all legitimate expenses which they consider to be beneficial to and in the interests of the Trust.

17. The Trustees shall be entitled to obtain tenancy in and/or take on lease any premises and/or properties as they may consider proper, and also give them on leave and licence and receive deposits and/or advance compensation.

IN WITNESS WHEREOF the Settlor and the Trustees have hereunto set and subscribed their respective hands the day and year first hereinabove written.

SIGNED AND DELIVERED by the within-named Settlor……………….. in the presence of