Various Penalties Under the Income Tax Act: A compilation 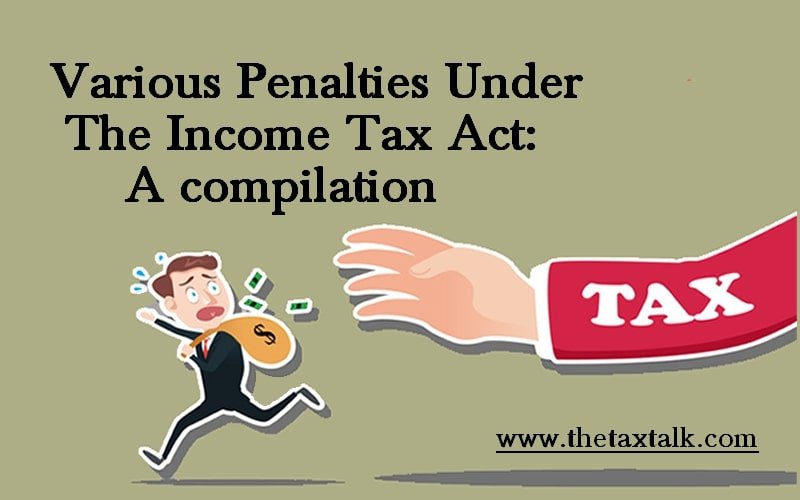 There are various penalties for various defaults in the Income Tax Act- 1961. Here is a compilation of the same for the benefit of the taxpayers:

Failure to maintain books of accounts and other documents

Default in making payment of tax

The amount of penalty leviable will be as determined by the Assessing Officer. However, the amount will not exceed the amount of tax in arrears

If the income assessed/ re-assessed exceeds the income declared by the assessee, or in cases where return has not been filed and income exceeds the basic exemption limit, penalty @ 50% of tax payable on such under reported income shall be levied.

If the assessee fails to get his accounts audited, obtain audit report, or furnish report of such auditor, a penalty will be leviable at the ₹1,50,000 or ½% of the total sale/ Turnover/ gross receipts whichever is lesser.

Failure of assessee to furnish Audit report related to foreign transaction, a penalty @ ₹1,00,000 will be payable

Where a person fails to deduct tax at source, he will be liable to pay a penalty equal to the amount of tax which he has failed to deduct/ pay.

Where a person fails to collect tax at source, he will be liable to pay a penalty equal to the amount of tax which he has failed to collect.

Failure to furnish TDS/TCS statement or furnishing incorrect statements, shall attract a penalty ranging from ₹10,000 to ₹1,00,000

Penalty for loans and deposits acceptance / repayment by any modes other than Account payee cheque/ draft/ ECS:

If a person takes/ accepts loan/ deposit except by way of Account payee cheque/ account payee draft/ ECS, and if the aggregate amount exceeds ₹20,000, he shall be liable to pay a penalty of an amount equal to such loan/ deposit.

If, an amount of ₹2,00,000 or more is received in aggregate from a person in a day/ single transaction/ relating to one event, a penalty equal to such amount will be payable.

Penalty for false entry such as fake invoices

In case the income tax officer notices that the books of accounts provided by the assessee in the proceeding contains the following:

In such case, assessee might have to pay a penalty of the amount equal to sum of such false or omitted entries.

A penalty of ₹50,000 shall be attracted for furnishing inaccurate statement of a financial transaction/ reportable account

Failure of an eligible investment fund to furnish any statement / information/ documents within the prescribed time shall attract a penalty of ₹5,00,000

Failure to furnish any information/ document by an Indian Concern related with international transaction, shall attract a penalty of 2% of the value of transaction or ₹50,000 in some cases.

If a report/ certificate is required to be furnished by an Accountant/ Merchant Banker/ Registered Valuer and such information is found to be incorrect, a penalty of ₹10,000 for each incorrect report/ information is payable

Failure to furnish information by any person who is attending/ helping carrying the business/ profession of any person, in whose building/ place the income tax authority has entered for collecting information shall attract a penalty of upto ₹1,000

Non furnishing of report by any reporting entity which is obliged to furnish Country by Country report will attract penalty as under:

Failure to apply/quote TAN/ quoting false TAN shall attract a penalty of ₹10,000

In case of the following defaults, ₹10,000 will be the penalty leviable,

Refusal to answer questions put by the department

Refusal to sign statements made in income tax proceedings

Non-compliance with summons to give evidence/ produce books of accounts

Failure to comply with a notice