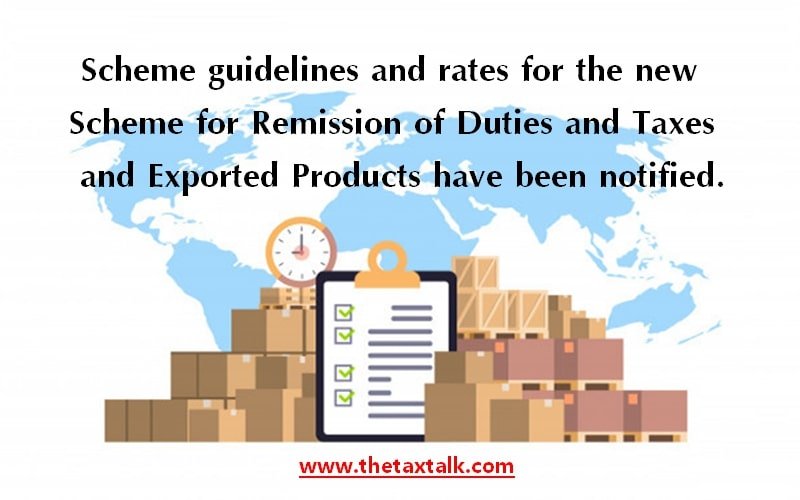 Subject: Scheme Guidelines for Remission of Duties and Taxes on Exported Products (RoDTEP)

SCHEME FOR REMISSION OF DUTIES AND TAXES ON EXPORTED PRODUCTS (RoDTEP)

vii. Under the Scheme, a rebate would be granted to eligible exporters at a notified rate as a percentage of FOB value with a value cap per unit of the exported product, wherever required, on export of items which are categorized under the notified 8-digit HS Code. However, for certain export items, a fixed quantum of rebate amount per unit may also be notified. Rates of rebate / value cap per unit under RoDTEP will be notified in Appendix 4R. In addition to necessary changes which may be brought in view of budget control measures as mentioned above, efforts would be made to review the RoDTEP rates on an annual basis and to notify them well in advance before the beginning of a financial year.

viii. The rebate allowed is subject to the receipt of sale proceeds within time allowed un der the Foreign Exchange Management Act, 1999 failing which such rebate shall be deemed never to have been allowed. The rebate would not be dependent on the realization of export proceeds at the time of issue of rebate. However, adequate safeguards to avoid any misuse on account of non-realization and other systemic improvements as in operation under Drawback Scheme, IGST and other GST refunds relating to exports would also be applicable for claims made under the RoDTEP Scheme.

4.55 Ineligible Supplies/ Items/Categories under the Scheme: The following categories of exports/ exporters shall not be eligible for rebate under RoDTEP Scheme:

iii. Export products which are subject to Minimum export price or export duty

xii. Products manufactured or exported by any of the units situated in Free Trade Zones or Export Processing Zones or Special Economic Zones

xiii. Products manufactured or exported availing the benefit of the Notification No. 32/1997-Customs dated 1st April, 1997.

xiv. Exports for which electronic documentation in ICEGATE EDI has not been generated/ Exports from non-EDI ports

4.55 A Government, however, reserves the right to modify any of the categories as mentioned above for inclusion or exclusion under the scope of RoDTEP, at a later date.

4.55 B Inclusion of exports made by categories mentioned in para 4.55 (x), (xi) and (xii) above and RoDTEP rates for export items under such categories would be decided based on the recommendations of the RoDTEP Committee.

4.56 Nature of Rebate: The e-scrips would be used only for payment of duty of Customs leviable under the First Schedule to the Customs Tariff Act, 1975 viz. Basic Customs Duty.

For the purposes of audit and verification, the exporter would be required to keep records substantiating claims made under the Scheme. A monitoring and audit mechanism with an IT based Risk Management System (RMS) would be put in place by the CBIC, Department of Revenue to physically verify the records of the exporters on sample basis. Sample cases for physical verification will be drawn objectively by the RMS, based on risk and other relevant parameters.

4.57A For a broad level monitoring, an Output Outcome framework will be maintained and monitored at regular intervals.

4.58 Residual Issues: Residual issues related to the Scheme arising subsequently shall be considered by an Inter-Ministerial Committee, named as “RODTEP Policy Committee (RPC)” chaired by DGFT (comprising members of Department of Commerce and Department of Revenue), whose decisions would be binding.

4.59 The Appendix 4R containing the eligible RoDTEP export items, rates and per unit value caps, wherever applicable is available at the DGFT portal www.dgft.gov.in under the link `Regulatory Updates >RoDTEP’.

Effect of this Notification: Scheme guidelines and rates for the new Scheme for Remission of Duties and Taxes and Exported Products have been notified.

Tags: Scheme guidelines and rates for the new Scheme for Remission of Duties and Taxes and Exported Products have been notified.