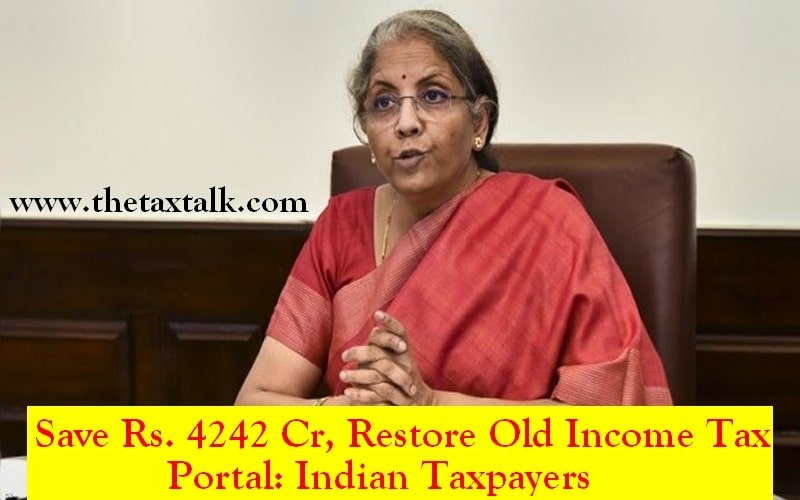 Union Minister for Finance & Corporate Affairs Smt. Nirmala Sitharaman took a meeting with Mr. Salil Parekh, MD & CEO, Infosys to convey the deep disappointment and concerns of the Government and the taxpayers about the continuing glitches in the e-filing portal of the Income Tax Department even after two and half months since its launch, which was also delayed.

Smt. Sitharaman sought an explanation from Infosys for the repeated issues faced by taxpayers.

The Ministry of Finance emphasized that there is a need for putting in more resources and efforts on the part of Infosys so that the much delayed delivery of agreed services is ensured.  Mr. Parekh was also sensitized on the difficulties that the taxpayers were facing and the problems that are arising on account of the delays in the functioning of the portal.

The Finance Minister demanded that the issues faced by taxpayers on current functionalities of the portal should be resolved by the team by 15th September, 2021 so that taxpayers and professionals can work seamlessly on the portal.

Mr. Parekh explained that he and his team are doing everything to ensure the smooth functioning of the portal. Further, Mr. Parekh said that over 750 team members are working on this project and Mr. Pravin Rao COO of Infosys, is personally overseeing this project. Mr. Parekh also assured that Infosys is working expeditiously to ensure a glitch-free experience to the taxpayers on the portal.

Above was the content of the press release issued by the CBDT after Hon’Ble FM met MD of Infosys. There was expectation by the taxpayers and tax consultants that the old portal may be restored. The taxpayers are already facing trouble in the GST portal which is also developed  by Infosys and the income tax portal is now following the part of the GST.

Old income tax portal was time tested and have an established track record of successful running. It has never faced the issue in the last 10 years like the one which is there since last 2.5 months of new portal.

Still, the taxpayers wish that the old portal be restored as the new portal involves a time consuming and cumbersome process of return filing. It will not be an ease of business but disease of business. Giving dates till 15th September is an attempt to kill the time, expressed by taxpayers. All the dates were extended earlier in view of the trouble in the new portal and now the dates will be required to be extended again. The question remains, why we were requiring the new portal? Why we are unsettling the already well settled system? Is there anything to learn from disastrous implementation of the GST System? Whether old income tax portal in the last 10 years of its implementation has given the trouble like the new portal? Whether GST portal can in any way be compared with the performance of the old income tax portal? Will it not be wise decision if the income tax portal is kept on hold for the sake of the taxpayers of the country who are already burdened enough with the trial and error approach? Hope the wisdom prevails and the vendors like Infosys be given a lesson that this Government won’t tolerate the false commitment as has been given in the last few weeks.  Why should the taxpayers be taken for granted?

The result given by vendors and the statement that “over 750 team members are working on this project” is what we should accept?

We strongly believe that the proposal to restore the old portal would not only result in saving of around Rs. 4000 Cr of the Government but also result in better compliance for the taxpayers.