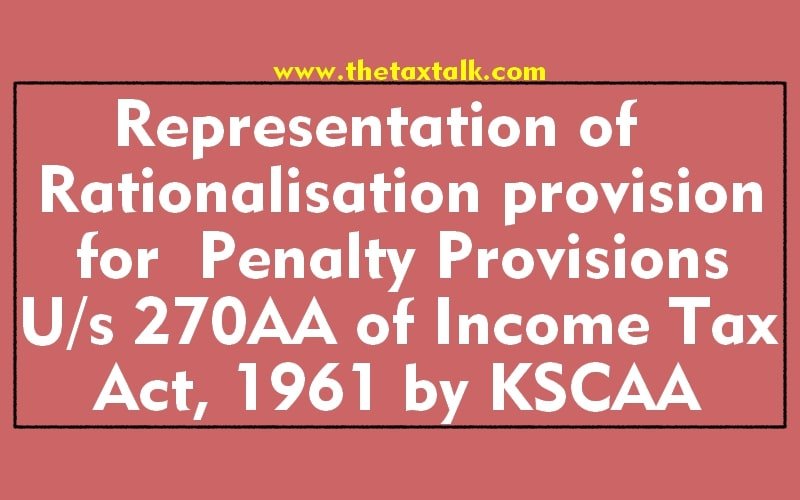 As the first and second wave of the Covid-19 pandemic has ravaged the country for almost past 18 months and ever since, the country is slowly regaining impetus towards economic and overall stabilization and growth.  However, on current date the country is again on the anvil of bracingthe third wave of Covid-19with problems related to business disruptions caused by first and second wave on an overall perspectivestill continue to grapple the citizens in meeting various statutory compliance calendars. At this juncture we would like to humbly submit to your good selves ourrepresentation highlighting suggestions on the rationalisation of Penalty provisions u/s 270AA of Income Tax Act, 1961.

Finance Act, 2016 has also inserted a benevolent Section 270AA for granting immunity from imposition of penalty under section 270A as well as from initiation of prosecution proceedings under sections 276C or 276CC of the Act,subjectto satisfaction of the following cumulative conditions:

As per rule 129, the application to the AO to avail the immunity has to be filedin Form No. 68 within one month from the end of the month in which the order which is leading to initiation of penalty u/s 270A has been received.

Since this is the first year of implementation of sections 270A and 270AA, there are instances of the above timelines not being followed by the Assessing Officers as well as Assessees.

Section 270AA of the Act being a beneficial provision, as it seeks to provide an immunity from penalty and prosecution and to espouse its true purpose we may hereby urge that the time limits requiredfor payment of demand as specified in the demand notice and filing of Form No.68 can be little relaxed. The intent or purpose of this provision will still be met even in cases where there is only aminor delay in the payment of taxes or filing of Form No. 68 andso long as appeal is not filed against the order.Nevertheless, even though there is a delay, it is still pertinent to note that such taxes are paid along with additional interest. Therefore, there is no loss of revenue to Government if belated immunity applications are accepted.

Vivad-Se-Vishwas Scheme (VSVS) seeks to attain the same objective of the early settlement of cases/collection of taxes, grant of immunity from penalty, and prosecution. In view of Covid pandemic situation, the due dates for payment of taxes as determined by way of the issue of Form No. 3 have now been extended by the Government to 31.08.2021 ( to 31.10.2021 with additional sum) from original due date of 31.03.2021 for that scheme. Alas, no similar corresponding reliefshave been forthcoming in respect of provisions of section 270A read with section 270AA of the Act, although these provisions operateon the same canvas as that of VSVS. It may therefore lead to giving an indiscriminate and unfairtreatment by tarring same brush to both groups of taxpayers as covered by section 270A and 270AAvis-a-visgroup of taxpayersas covered by VSVS. The brunt of Covid-19 has been suffered by every citizen of this country, there is no one who has escaped unscathed from its fury and it is therefore we besiegeto your good selves to please take cognizance of Covid-19 situation and provide a leniency by conceding minor slippages if there are any on the part of taxpayers in meeting the compliance timelines for payment tax/interest and filing of Form No. 68.

Incidentally, we would also wish to mention that as regards assessment proceedings forAY 2018-19 and AY 2017-18qua to Transfer pricing cases,even in these cases the fulfillment of all the conditions and timelines as specified in section 270A and 270AAposes a real predicament of current times owing to severe business disruptions caused by Covid pandemic.

If our above suggestionsare accepted, it would also benefit the Government in terms of 1) Reduction in litigation 2) Speeding up of tax collections.